Anti-abortion rights and abortion rights demonstrators hold signs outside the US Supreme Court in Washington, D.C., US, on Friday, June 24, 2022.
Photographer: Ting Shen/Bloomberg via Getty Images

The US Supreme Court overturned the 1973 Roe v. Wade decision and wiped out the constitutional right to abortion, issuing a historic ruling likely to render the procedure largely illegal in half the country and further polarize a deeply divided nation.

The court voted along ideological lines. All six Republican-appointed justices voted to uphold Mississippi’s ban after 15 weeks of pregnancy, and five said they would go further and overturn Roe and the constitutional right it established. Chief Justice said he would have stopped short of toppling Roe completely.

As thousands of protesters gathered outside the court, the emotional words from the justices echoed the national divisions over abortion. Writing for the majority, Justice said Roe “usurped the power to address a question of profound moral and social importance that the Constitution unequivocally leaves for the people.”

The court’s three Democratic appointees – Justices , and -- said the majority had relegated women to “second-class citizenship.”

The impact promises to be transformational. Twenty-six states either will or are likely to ban almost all abortions, according to the Guttmacher Institute, a research organization that backs abortion rights. Thirteen have so-called trigger laws designed to automatically outlaw abortion if Roe is overturned.

Justices , , and joined Alito in the majority. The ruling tracks a draft majority opinion Politico obtained and published May 3.

“Whatever the exact scope of the coming laws, one result of today’s decision is certain: the curtailment of women’s rights, and of their status as free and equal citizens,” the group wrote. They closed by saying: “With sorrow -- for this court, but more, for the many millions of American women who have today lost a fundamental constitutional protection -- we dissent.” 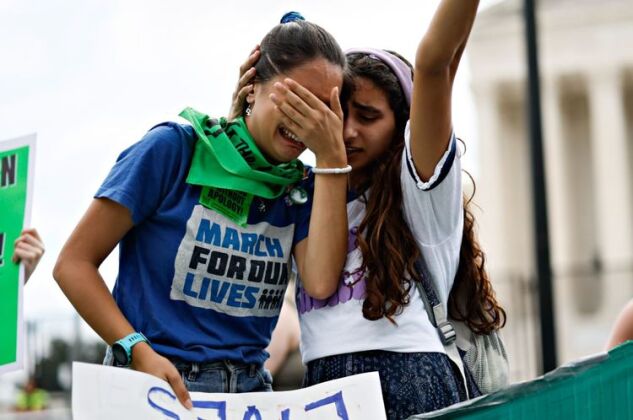 Democrats are seeking to make abortion rights a major issue in congressional races in November, given that polls have consistently showed most voters didn’t want Roe overturned. It could help Democrats blunt the impact of high inflation and President Joe Biden’s low approval ratings.

Reaction in Congress divided along party lines. House Speaker vowed to try to thwart the ruling by enshrining Roe v. Wade into law.

“American women today have less freedom than their mothers,” a tearful Pelosi told reporters Friday. “Republicans are plotting a nationwide abortion ban,” and they cannot be allowed to have majority in Congress, she added. 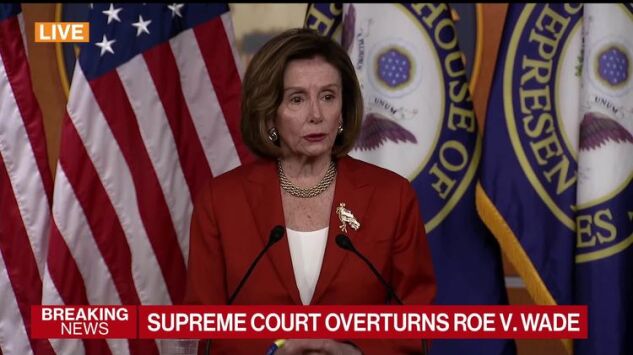 House Republican leaders just put out a joint statement on the decision.

“Every unborn child is precious, extraordinary, and worthy of protection,” they said. “We applaud this historic ruling, which will save countless innocent lives.” 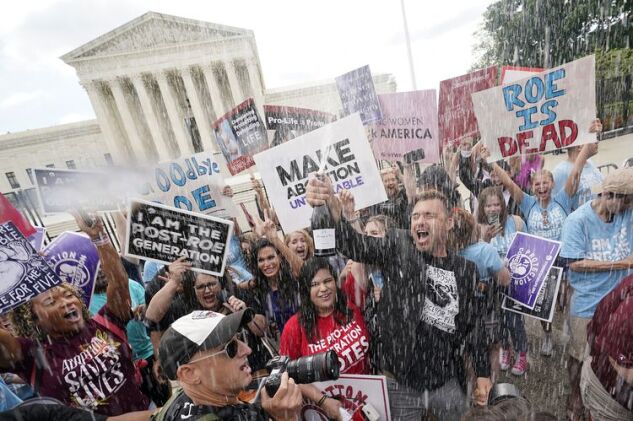 Biden condemned the ruling from the White House. “Now with Roe gone we must be very clear: The health and life of women in this nation are now at risk,” Biden said.

The ruling fulfills a decades-old dream for legal and religious conservatives, capping a half-century fight to overrule one of the most controversial opinions in US history. The majority also overturned Planned Parenthood v. Casey, the 1992 decision that reaffirmed Roe and laid out what has been the controlling law ever since. Casey said the Constitution’s 14th Amendment barred states from imposing significant restrictions until fetal viability, roughly 23 weeks into pregnancy.

“This is a great day for preborn children and their mothers,” said Carol Tobias, president of National Right to Life. “The court has correctly decided that a right to abortion is not in the Constitution, thereby allowing the people, through their elected representatives, to have a voice in this very important decision.”

Abortion-rights supporters say overturning Roe will have a devastating impact, threatening decades of economic gain for women and depriving millions of the right to make deeply personal health-care decisions. They say the effect will be especially large for Black and Hispanic women, who are more likely to lack the funds and ability to take time off work to travel out of state for an abortion.

The ruling is “regressive and cruel,” said , president of the Center for Reproductive Rights, which led the challenge to the Mississippi law.

“Utter chaos lies ahead, as some states race to the bottom with criminal abortion bans, forcing people to travel across multiple state lines and, for those without means to travel, carry their pregnancies to term -- dictating their health, lives, and futures,” Northup said in a statement. “Today’s decision will ignite a public health emergency.”

The decision is likely to unleash battles on multiple new fronts, including the status of long-dormant abortion laws such a 1931 Michigan ban. Lawmakers in anti-abortion states will have to decide whether to make exceptions for cases of rape or incest and whether to impose criminal penalties on people who get abortions.

Kavanaugh, who emerged as the court’s pivotal vote in future abortion cases, preemptively one major issue, saying in a concurring opinion that he doesn’t believe states may bar residents from traveling to other states to terminate their pregnancies. He also said states may not retroactively impose punishment for abortions.

As he did in his draft opinion, Alito said Roe was “egregiously wrong” and “on a collision course with the Constitution from the day it was decided.” Alito said that because the Constitution doesn’t explicitly mention the right to abortion, it needed to be “deeply rooted in the nation’s history and traditions” to be protected.

He said that throughout American history, most states criminalized abortion in at least some stages of pregnancy and the “vast majority” criminalized it in 1868, when the 14th Amendment was adopted.

“The inescapable conclusion is that a right to abortion is not deeply rooted in the nation’s history and traditions,” Alito wrote. ”On the contrary, an unbroken tradition of prohibiting abortion on pain of criminal punishment persisted from the earliest days of the common law until 1973.”

Many historians have disputed Alito’s reading of US history, arguing that until the middle of the 19th century states generally put no restrictions on abortion.

Roberts said he would have taken a “more measured course” than his fellow conservatives, discarding the viability line but leaving the core abortion right in place.

The abortion right should “extend far enough to ensure a reasonable opportunity to choose, but need not extend any further -- certainly not all the way to viability,” he wrote.

The joint dissent blasted the majority for focusing so heavily on laws put in place at time when women weren’t allowed to vote.

“When the majority says that we must read our foundational charter as viewed at the time of ratification (except that we may also check it against the Dark Ages), it consigns women to second-class citizenship,” the dissenters wrote.

Alito said the ruling shouldn’t be read to cast doubt on other constitutional protections established by Supreme Court decisions, including the rights to same-sex marriage and contraception.

“Rights regarding contraception and same-sex relationships are inherently different from the right to abortion because the latter (as we have stressed) uniquely involves what Roe and Casey termed ‘potential life,’” he wrote.

The dissenters said they were skeptical, pointing to Thomas’s separate opinion calling on the court to reconsider those rulings.

“No one should be confident that this majority is done with its work,” the trio wrote. “The right Roe and Casey recognized does not stand alone. To the contrary, the court has linked it for decades to other settled freedoms involving bodily integrity, familial relationships, and procreation.”

A majority of the U.S. public has consistently supported keeping abortion legal in all or at least some cases since the mid-1970s, according to Gallup data, while only about one in five Americans say the procedure should be illegal under all circumstances. A Gallup poll conducted in May found that 55% of Americans identify as “pro-choice,” the highest level since 1955.