The year ahead will be a busy one for the IRS, as the agency wraps up guidance tied to the 2017 tax law and takes on new projects.

Finishing rules stemming from the tax overhaul was a goal the IRS set for itself in 2020. But the scope of the task—dozens of proposed and final packages—have left some spilling into the new year. And once the IRS checks off tax overhaul guidance, the next focus areas include a top-down agency reform law.

President-elect Joe Biden’s inauguration is putting more pressure on the agency to complete its goal. Biden has said he will halt and review any regulations that have been released but not yet published in the Federal Register when he becomes president.If the IRS wants to finish its to-do list, the deadline is Jan. 20.

“They’ve been trying to hurry it along, but I think it’s going to be a challenge to get everything out,” Lisa Zarlenga, partner at Steptoe & Johnson LLP said.

Packages impacting multinationals are also still to come, including final rules for the global intangible low-taxed income high-tax exclusion. The package is meant to shield companies from paying U.S. tax if they’re already paying a certain amount of taxes overseas. The agency also has yet to issue final rules on foreign tax credits.

Rules that have already been published in the Federal Register include: final rules for a new tax on endowment income (T.D. 9917) and final rules for like-kind exchanges (T.D. 9935). 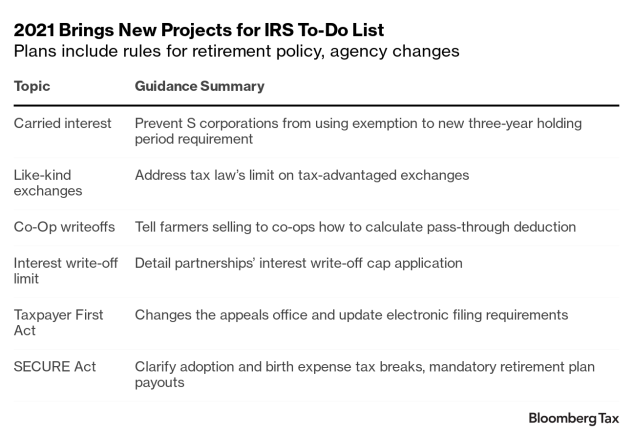 The change in administration could complicate the process. Biden laid out an ambitious tax agenda during his campaign, but many of the changes would require legislative action that might be hard to achieve, depending on the results of the Senate runoff elections in Georgia.

It’s not yet clear how much focus the incoming administration will place on tax regulations, said Mike Dolan, national director of IRS policies and dispute resolution in the Washington National Tax practice of KPMG LLP. Dolan is a former IRS deputy commissioner and served two extended appointments as acting commissioner.

“If making substantial changes to the TCJA turns out to be a priority of theirs that they want to get done, then of course that’ll open up a tremendous amount of activity,” he said, referring to the Tax Cuts and Jobs Act, as the tax overhaul is known.

The high-tax exclusion rules are particularly political, and a Biden administration may decide to revisit them, said Eric Solomon, partner at Steptoe & Johnson LLP in Washington. Solomon is a former Treasury official.

The IRS is due to issues two guidance projects that benefits advisers are anticipating, both tied to the 2019 SECURE Act (Public Law 116-94). The packages include a grab bag of retirement tax breaks tied to adoption and birth expenses and further clarification about the tax treatment of mandatory retirement plan payouts.

Also on the IRS’s agenda another 2019 law centered on agency reform law. The Taxpayer First Act (Pub. L. 116-25) calls for the IRS to upgrade the taxpayer experience, improve employee training, and potentially reorganize. The agency is planning to send a report to Congress this month laying out recommendations for achieving those goals, after initially aiming to send it in December.

The law was bipartisan, making it unlikely the implementation strategy would change much under the Biden administration.

The agency’s planned packages tied to the law include proposed regulations on changes to the appeals office and guidance updating electronic filing requirements for tax-exempt organizations, according to the current Priority Guidance Plan.

The upcoming report to Congress may necessitate further guidance, in addition to the administrative changes that are sure to be included, Dolan said.

—With assistance from Warren Rojas.