John Schrock was waiting to get paper cups and plates at a military store in Baghdad when the rockets hit.

The lights went off. Fixtures dropped from the ceiling. Shelves collapsed all around him. One soldier died while 20 others, including contract workers and Iraqis, were injured. Schrock said he couldn’t hear anything for hours after the incident.

“They hit so hard, your feet go out from underneath you. I just remember falling to the ground,” said Schrock, who was part of the Louisiana Army National Guard’s 256th Infantry Brigade.

Schrock was wearing his military-issued earplugs, made by Aearo Technologies LLC, which acquired in 2007. Soldiers in the field were used to wearing them all the time; loud noises from trucks and weapons such as his own M-249 machine gun were commonplace in his job. “So everything was loud. You know, even with the earplugs, it was loud,” he said.

Now at 40, he suffers from tinnitus and is on his second pair of hearing aids. As one of thousands of veterans—there are now over 230,000 plaintiffs—suing 3M for compensation for his hearing loss, he’s been bewildered and upset by 3M’s move to put Aearo into Chapter 11 bankruptcy protection after losing 10 of the first 16 bellwether earplug trials.

3M was in court in Indianapolis this week for a multi-day hearing, arguing in front of a bankruptcy judge that the earplug lawsuits against it should be stopped. Although Aearo can freeze the lawsuits it faces because of bankruptcy law, 3M can’t do it without a judge agreeing to do so.

“For 3M, they probably had this in the works before they went into litigation,” Schrock said in an interview. “At the same time, they are going to say we stand behind our servicemen and women and our veterans.”

“It even affects you when you are trying to go to sleep,” he said. “It’s this constant thing in your ears.”

3M Co. said in an emailed statement that “the Chapter 11 process is the best way to do right by veterans and other stakeholders, and that is why 3M has committed to provide $1 billion to a trust to help resolve these claims.” The bankruptcy process provided a simpler and more efficient path to resolution than continuing litigation, the company said.

A consultant hired by veterans’ lawyers told the bankruptcy judge this week that 3M faces more than $100 billion in losses from the earplug lawsuits, which the company called “unsupported and clearly flawed speculation.”

“Faced with years of litigation and veterans waiting for resolution, the right choice is finding a reasonable, equitable and timely solution for all concerned. We cannot ask our veterans to wait years for these cases to play out in court. The Chapter 11 process offers a better solution,” said Dan Leaf, a retired 3-star general and Air Force fighter pilot who now works for 3M in an advisory capacity. 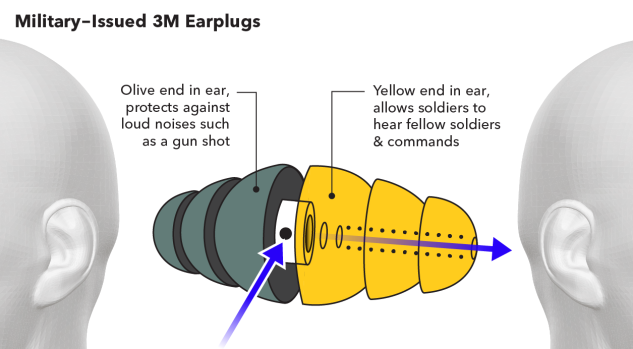 Troops were required to wear dual-ended earplugs made by Aearo, which St. Paul, Minn.-based 3M acquired for $1.2 billion in 2007, during training and combat duty in Iraq and Afghanistan after the Sept. 11, 2001, terrorist attacks.

The veterans who are now suing 3M say that that the earplugs were too short for some ears and didn’t provide a protective seal, and were faulty even as the company was marketing them.

Nathan Frei, an active-duty infantry officer from 2011 to 2015 and currently a company commander with the Washington Army National Guard, said he first noticed issues with his hearing in 2013. He thought a TV was on when it wasn’t. He went scouring his apartment for a ringing noise he kept hearing, before realizing that the noise was in his head.

His exposure to loud noises was constant. Now, at 34, he said he’s going to suffer from hearing loss for the rest of his life. 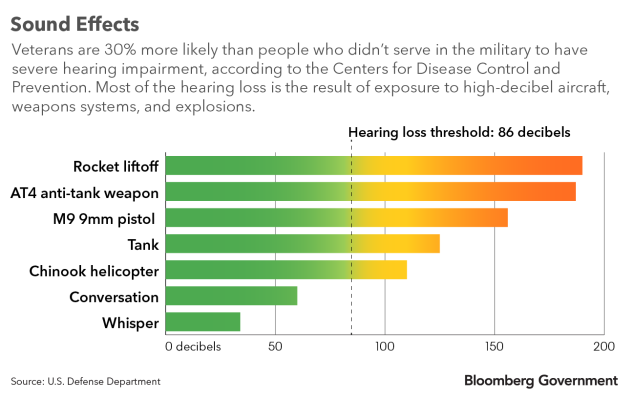 Is this the Way?

Frei said 3M is shirking responsibility. “They realize the verdicts aren’t going their way, they’re trying to avoid responsibility by pushing off into bankruptcy,” he said. “I have soldiers that I’ve served with that suffer from hearing loss as well. We were all wearing that same hearing protection.”

Court documents show that 3M earplug marketing materials included lines such as “losing your hearing is not a requirement for serving your country” and “hear the action now, hear life later.”

John Burk, who served with the 138th Quartermaster Company of the Indiana National Guard and was deployed to Ramadi in Iraq, said the earplugs gave them a false sense of security. He said he now has tinnitus and hearing loss.

The $1 billion that 3M wants to set aside for compensation, he said, “don’t amount to much of nothing” given the impact on upwards of 300,000 individuals.

“That is not doing anything to compensate for the diminished livelihood,” Burk said.