The U.S. leads all advanced democracies in deaths from police violence, says Frank Edwards, a sociologist at Rutgers University School of Criminal Justice. Based on his research, Black men died from police violence last year at a rate three times greater than White people. Fundamental changes in police-civilian interaction are needed, he says.

The casual attitude Derek Chauvin displayed on video while pressing his knee into George Floyd’s neck exemplified a key feature of policing in the U.S.—the use of incredible levels of violence against Black people during routine policing.

The findings suggest that procedural reforms aren’t enough, and fundamental changes in police-civilian interaction are needed. 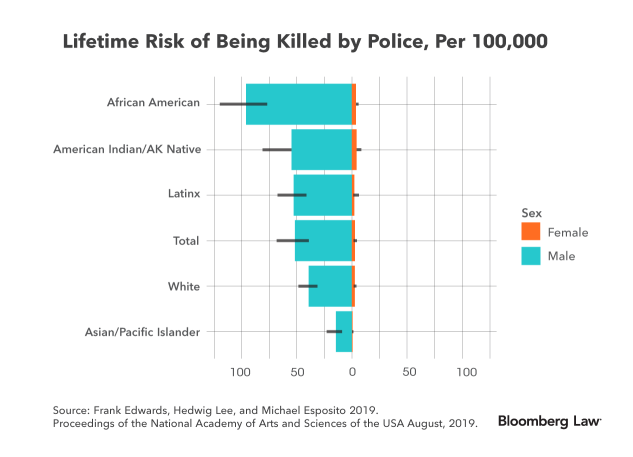 The Sixth Leading Cause of Death for Men 25-29

My colleagues and I in 2019 conducted a series of epidemiological analyses of the prevalence of police-involved deaths by sex, age, and race/ethnicity in the U.S. While most analyses narrowly focus on gun deaths, our work broadly considers deaths involving any officer use of force, and is inclusive of cases of asphyxiation, such as the killings of Eric Garner in New York, and George Floyd in Minneapolis.

Using data from 2013 to 2018, we found that risk of death is clearly patterned by age, by race, and by gender. Young Black men face a higher risk of being killed by police than any other group in the U.S.

Police are responsible for more than 1 percent of the deaths of young Black men between the ages of 20 and 35. Risk of being killed by police is pronounced for all young men and women.

We found that police violence was the sixth leading cause of death for men in the U.S. between the ages of 25 and 29, following accidents, suicides, other homicides, heart disease, and cancer.

As the recent killing of 13-year-old Adam Toledo by Chicago police clearly illustrates, risks are not confined to young adulthood. Using demographic methods, we estimate that about 1 in 2,000 men and boys can expect to die by police violence over their life course.

For Black men in the U.S., recent estimates suggest that police violence has resulted in about 16,000 years of lost life.

What is remarkable about Derek Chauvin’s killing of George Floyd is not the homicide itself. Police in the U.S. kill about three people every day. What is remarkable is that Chauvin was indicted and is being tried for murder.

Police very rarely face any significant legal or professional consequences for killing another person while on duty. Police are protected by state and federal laws that are exceptionally broad in deferring to officer discretion in assessing threats and using violence.

These broad powers to kill, coupled with the deep institutionalization of racist violencein U.S. policing drive the U.S. to lead all advanced industrial democracies in police-related deaths.

Efforts to reduce or eliminate violence must look beyond simple procedural reforms such as training or use-of-force policy revisions. Meaningful change will require fundamental shifts in how we handle interactions between the government and civilians.

A number of jurisdictions are deploying unarmed professionals to handle mental health crises, some cities are experimenting with disarming officers tasked with traffic enforcement, and many countries rely on public safety forces that are wholly unarmed. Given the clear threat to public health presented by police in the U.S., urgent changes are needed to dramatically reduce the frequency with which officers kill.

Frank Edwards, Ph.D., is an assistant professor of criminal justice at Rutgers University–Newark. His work has been published in the Proceedings of the National Academy of Sciences, the American Journal of Public Health, the American Sociological Review, and other outlets.