Less than 20% of the attorneys arguing before the Federal Circuit in each of the first five months of this year were women.
Photographer: Perry Cooper/Bloomberg Industry Group

Women have a clear presence on the bench at the U.S. Court of Appeals for the Federal Circuit: Five of the 12 active judges are women, including the current and incoming chief judges. So are about half of the court’s law clerks.

Yet fewer than 20% of the attorneys arguing in front of them in each of the first five months of this year were women. The percentage is even lower if you take out government lawyers.

There are women who are both capable and senior enough to argue at the court, but some clients and law firms are reluctant to give them a chance, attorneys said.

“This is not a pipeline problem,” said Mel Bostwick, partner at Orrick, Herrington & Sutcliffe LLP in Washington. “The fact that there is a disparity suggests there’s differential treatment somewhere.”

Only Woman in the Room

More than two-thirds of the Federal Circuit’s cases involve patent law, an area that’s historically been male-heavy in part because of the patent bar’s science requirements. 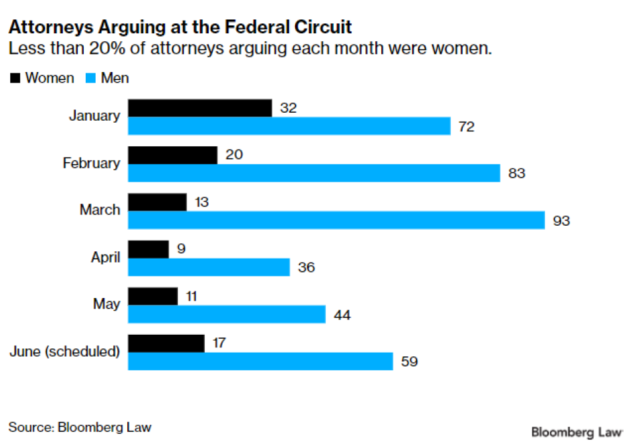 “There are still more days than not when I’m—if not the only woman that day—one of only two women arguing in a slate of three or four cases,” said Hogan Lovells partner Cate Stetson, who has argued several patent appeals at the court. “It’s strange and lonely sometimes.”

The disparity is especially striking given the court’s female leadership, Bostwick said. Judge has been chief judge for the last six years. When her term ends next year, Judge is next in line.

Three of the five women judges have technical degrees and patent backgrounds, compared to only two of the seven active male judges.

Bostwick says implicit bias is part of the problem. “Even if it’s not a matter of who has an engineering degree, still about context—the perception that women can’t do science,” Bostwick said.

There are also “less nefarious things happening,” Bostwick said. If a male advocate has built up a track record, it’s easier for clients to pick him based on his experience, she said.

Clients may turn to their patent trial lawyers to run their appeals, and “the patent bar is significantly more male than female,” Hogan Lovells appellate specialist Jess Ellsworth said.

The age and diversity of a firm’s partnership also “makes a difference in terms of how people think and how things are structured,” said Irena Royzman, patent litigator at Kramer Levin Naftalis & Frankel LLP in New York. Older partners may not be as willing to let less experienced attorneys argue.

“It’s an issue of getting chances,” Royzman said. “It perpetuates the problem—if you can’t get that first argument it’s harder to get them down the line.”

“The reality is once you’ve done one, it’s easier to get the second and the third,” Ellsworth said. “There’s a snowball effect.”

“What’s lost when you don’t have a woman arguing a case is bringing those ‘feminine qualities'—if you are going to subscribe to traditional gender roles—into an oral argument is exactly what everybody should strive for: consensus building and problem solving,” Stetson said.

Those goals are particularly important at the Federal Circuit, where advocates seek to bring a panel of three judges around to their side, she said.

“What you lose by not trying to bring in a woman lawyer, might be exactly what you should be looking for—someone who is willing to listen and pay attention to judges and be able to intuit a little bit more what they are troubled by and solve it,” she said.

That’s preferable to advocates who get “caught up in their own oratory, which tends to happen more with the male persuasion,” Stetson said.

Not seeing women argue before the court is discouraging to younger attorneys and female Federal Circuit clerks, Bostwick said.

“They see people arguing that don’t look like them,” she said. “That’s very discouraging and makes it tough for them to see themselves in that role.”

The court hasn’t made any formal indication that it is concerned about gender parity among advocates, and declined a request to comment.

It recently signaled it may be interested in giving opportunities to female lawyers in two orders regarding oral argument.

But clients and law firms are in the best position to change who appears before the court. For example, in one of those orders on oral argument, the court delayed a hearing on a video streaming case after ‘s Google said it wanted to give a female associate at Williams & Connolly LLP the opportunity to present her first appellate argument in person.

“Companies are on the front edge of making sure people with diverse backgrounds have opportunities,” said Lauren Degnan of Fish & Richardson in Washington. She credits her client Microsoft Corp. with giving her opportunities to argue early in her career.

It’s up to law firms “to put women and diverse attorneys in positions where clients can see they are competent,” Degnan said.

Fish has encouraged women and diverse attorneys to get started early in patent litigation, at the motion and claims construction stages, she said. “Then by that time that this really important 15 minutes of oral argument happens, the client is really comfortable” with the attorney’s capabilities, she said.

Groups including the Federal Circuit Bar Association and ChIPs, which advocates for women in intellectual property law, sponsor next-generation programs to bring those issues to the forefront and help attorneys get those critical experiences.

Helping female attorneys get their first argument in pro bono veterans cases or lower-stakes appeals from the patent office can given them the experience they need before taking on a paying client, Degnan said.

“There are efforts being made, and it’s a constant conversation topic,” Bostwick said. “But I haven’t seen change yet.”