Texas federal courts already have seen patent-related filings plunge by nearly one-fifth as fallout continues from a late-July order that dethroned the nation’s busiest patent judge—and the drop is even sharper among the non-practicing entities known colloquially as “patent trolls.”

More than a month after Chief Judge order in the US District Court for the Western District of Texas spread among its 12 judges the wealth of patent cases that otherwise would have been destined for Judge docket, data examined by Bloomberg Law reveal a proactive response by litigants.

From July 25, when Garcia issued the order, through Aug. 31, plaintiffs filed 142 patent cases in Texas district courts. During the same period last year, the courts fielded 176 such filings, according to Unified Patents LLC‘s Portal database. Unified, an international group with more than 200 members—mostly companies facing accusations of patent infringement—says it seeks to improve the quality of patents and “deter unsubstantiated or invalid patent assertions.”

The 19.3% year-to-year drop in Texas over the five weeks—compared with a 7.9% decrease nationally—suggests a strategic recalibration by plaintiffs, whether by turning to other venues as potential havens for patent owners or by simply withholding new filings until the fog has cleared.

“The fallout, for now at least, is that people are putting a lot more time, attention, and energy into the strategic side of where are we going to file,” said Blair M. Jacobs, a principal at McKool Smith. “All we can say with certainty is that the numbers have dropped off of a cliff completely since the order.”

Some courts are already seeing their share of patent filings creep up, giving clues as to where patent owners are turning in a post-Albright world, even as questions linger over whether Garcia’s replacement in November will rescind or modify his order.

Most of last year’s filings landed in eight districts, and two of the top three venues were in Texas. Between July 25 and Aug. 31 this year, patent filings were scattered among 13 districts, and although Texas remains in the top tier, an old stalwart reemerged as the most popular patent venue. 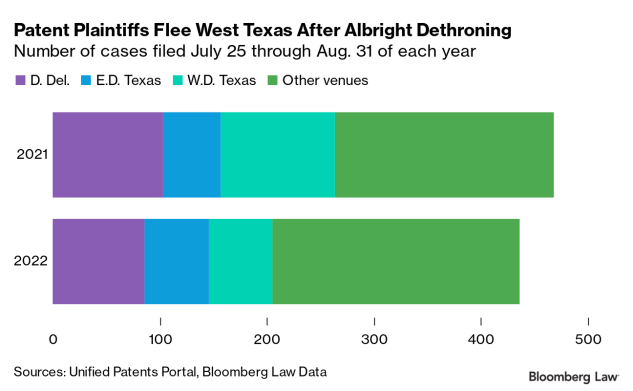 Already one of the busiest patent venues, the District of Delaware is expected to take on the lion’s share of the filings that would’ve previously gone to Waco. What the district lacks in friendliness to patent owners, it makes up for in judges experienced with patent law.

Last year, 103 of the 468 patent complaints filed nationwide from July 25 through Aug. 31 were docketed in Delaware. The venue accounted for 22% of such filings in that period, fewer than the top court, the Western District of Texas (107, 22.9%), according to UP’s Portal.

“We’ve already seen a steady flow of cases in general,” said Monte T. Squire, a Duane Morris LLP patent attorney based in Wilmington. “We do expect, among the Delaware community, that we’re going to see a big uptick in the next few months, for sure.”

Delaware, where most companies are incorporated, previously took on most of the fallout from the US Supreme Court’s 2017 ruling in TC Heartland LLC v. Kraft Foods Group Brands LLC, which ended the Eastern District of Texas’s reign as the most popular patent venue.

The challenge for the court then was figuring out how to handle the ballooning docket. Attorneys expect the court to be more prepared this time around.

The Delaware judges are efficient, and its newest judge, Gregory Williams, will take the bench soon, reassuring plaintiffs that there will be a fully staffed court, Squire said. The help of magistrate and visiting judges—including from the US Court of Appeals for the Federal Circuit—will also be crucial, he said.

“There’s been a lot of learning since then,” Squire said. “Not that the court wasn’t efficient before, but there’s an understanding of how the district can best handle the cases. I don’t expect any bogging down.”

Among so-called non-practicing entities—patent owners that use litigation as their primary revenue stream without selling products covered by the patents—Delaware emerged as the venue of choice, with 45 cases filed there, compared with the Western District of Texas’ 32. NPE filings in Delaware accounted for more than half of patent cases there since July 25. That’s despite a broader plunge in filings by NPEs, which in the 2022 stretch have launched about 50% fewer cases than they did one year ago.

During the period that began with Garcia’s order and ended Aug. 31, the Lone Star State, as a whole, attracted 142 of 436 nationwide patent filings—32.6% of the pie, more than any other state.

The districts, however, fared very differently. Where the Eastern District of Texas’s docket swelled,the Western District’s was nearly halved, from 107 last year to 59 this year. The few plaintiffs choosing to file in the Western District are either turning to other divisions—where they have a better chance at a judge with some patent experience—or rolling the dice in Waco in an attempt to land in Albright’s courtroom.

Filers in Austin would get one of two judges experienced in patent law, said Miranda Y. Jones, a partner at Porter Hedges LLP in Houston. In the Midland division, District Judge David Counts earlier this month issued a standing order implementing rules for patent cases, likely in preparation for any cases randomly assigned to his court from Waco.

Patent cases are so technical and eat up so many resources that it’s going to be a big shift for the Western District judges who haven’t fielded many over the years. There could be pressure on the district’s yet-to-be-named new chief judge, who will take over from Garcia in November, to rescind or modify the order, Jones said.

“I think a lot of patent owners are waiting to see what happens,” Jones said. “I suspect there may be a number of patent cases in the queue that could be filed now, but if you were a patent owner you would say, ‘Let’s hold off until November, it’s only a couple months away.’”