Imagine finding that a strip club is using the bikini pictures you posted to social media from your beach vacation to promote its end-of-summer party.

What could you do about it, legally?

Under intellectual property law, unless your image is worth something to the marketplace, the answer might be nothing.

A group of professional models has had only mixed success in suing strip clubs and similar establishments across the country for using their images in social media ads, even though none of the clubs had permission to use the pictures. In one case, the club admitted to finding them through internet image searches using phrases like “sexy girl in a military outfit.”

In Toth v. 59 Murray Enterprises, 11 models sued clubs in the Southern District of New York under the false endorsement provision of the Lanham Act, the federal law that governs trademarks and unfair competition. One of the plaintiffs, Tiffany Toth, said the New York Dolls Gentleman’s Club posted a photo of her in a cat costume onto a Facebook post advertising its Halloween party.

But only one of the 11—former “Baywatch” actress Carmen Electra—was allowed to pursue her case. The others didn’t meet the recovery standard of being famous among the ad’s intended audience, despite social media followings in the millions, appearances in multiple television shows and ad campaigns, and photo spreads in magazines like Playboy and Maxim, the court said in January.

Many courts shy away from gauging a plaintiff’s fame and require only an “intent to commercialize” a persona. In those cases, plaintiffs have fared better. Thirty-two models won a collective $900,000 from a Miami swingers club on their Lanham Act claims Sept. 17 in the Southern District of Florida. Cases involving similar groups of models have survived dismissal in New Jersey, Illinois, and the Middle District of Florida.

But the average person seems unlikely to win a case under the Lanham Act, regardless of whether the court requires fame or a commercial persona. And copyright law doesn’t tend to apply in cases where the plaintiff isn’t the photographer or doesn’t otherwise own the right to the image.

“This would shock the ordinary person,” said Susan Scafidi, professor, founder, and academic director of Fordham University School of Law’s Fashion Law Institute. “The way these cases are structured makes it very hard for a normal person to reclaim their image.” 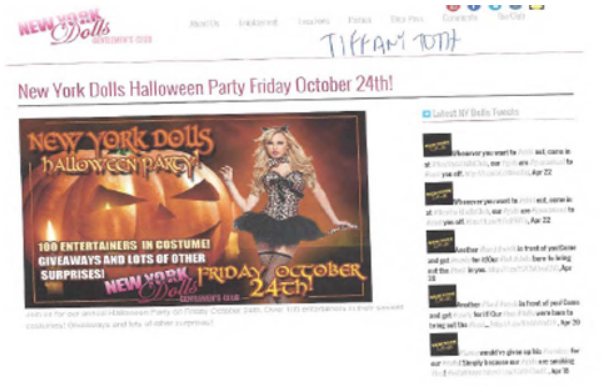 Model Tiffany Toth sued a New York club after her photo was used in a promotion for a Halloween event.

The Lanham Act, which allows lawsuits for false and misleading advertising, has usually covered a famous person with a public persona, the type of person who would traditionally be expected to endorse products.

But it was written in 1946, before every home had a television and before anyone had social media. Today, millions more people have public personas ripe for misuse in the wilderness of the internet.

“Given that people are offering images for public consumption on a regular basis in a historically unprecedented fashion, there are definitely more options for misuse” than ever before, Scafidi said.

Right-of-publicity laws, a form of intellectual property, protect people’s personas or likenesses regardless of fame. They’re particularly important in “an era where privacy is extremely difficult to obtain,” Philips Nizer LLP in New York, said.

But there’s no clear federal law in that area. Around half of U.S. states have right-of-publicity laws, creating a patchwork of requirements that aren’t always plaintiff-friendly. For example, New York’s law has a one-year statute of limitations, which Scafidi called a relatively short time to discover a harm and bring a case.

“You have to work quickly, and even then you can’t show damages necessarily if you haven’t commercialized your image,” Scafidi said.

Behr said the Toth plaintiffs would have had a stronger right-of-publicity case than a trademark case. But many of their claims were time-barred, and they couldn’t prove damages because they had already sold their rights to the photos for “fair market value” and were subject to broad releases.

, a trademark litigation partner at Fenwick & West LLP in Mountain View, Calif., said recovery can be justifiably difficult in these cases because right of publicity is a commercial right, not a moral one. Under the law, the right to your persona isn’t personal.

“If your image isn’t worth anything, then you haven’t been damaged,” Ball said. “The courts aren’t there to be an alternative to the lottery.”

Much of the difficulty for the average person in pursuing such cases comes down to money.

“I think part of the issue is similar to other issues in the law, in that when damages are minimal to that non-famous person, it’s hard to identify counsel that are willing to pursue that case,” Ball said. “That’s common not just to right of publicity claims, but more generally in the legal profession.”