Stone Brewing Co. recently walked out of one courtroom into another, emblematic of a craft beer scene that’s tailor-made for trademark litigation.

The San Diego brewer won a $56 million jury verdict in late March from over its Keystone beer rebrand that emphasized “Stone” on the label. Then Stone was itself sued two weeks later for allegedly knocking off smaller craft brewer Sycamore Brewing LLC’s “Keep it Juicy” tagline. The court stopped Stone from using the line on packaging during the suit.

Craft brewers used to consider branding a name written in erasable chalk in a taproom. But the popularity of craft beers exploded over the last decade, fostering a need for differentiation that has boosted both creativity and conflict.

Large companies have also pushed into the alcoholic beverage space where the federal government’s Trademark Trial and Appeal Board has held that everything from wine to beer to kombucha should be considered a related product. Meanwhile, the pandemic pushed beer out of the taproom and into cans, making clearance and due diligence in branding more difficult and critical.

“It’s probably as important if not more important than ever that trademark clearance be conducted in the U.S., so people aren’t potentially stepping on toes,” trademark attorney Lauriel F. Dalier of Sterne Kessler Goldstein & Fox PLLC said, adding that brewers looking into merchandise like t-shirts adds another layer of complexity and potential conflict. “It’s important to be looking into how these industries are expanding.”

Almost two decades ago, two craft brewers, upon realizing each had a beer called “Salvation,” teamed up to create “Collaboration Not Litigation Ale” in lieu of launching a trademark war.

Drumm pointed to that 2004 Belgian strong ale blend by Avery Brewing in Colorado and Russian River Brewing in California as embodying a spirit increasingly difficult to maintain. “Those days are over, we’re in the ‘Litigation Not Collaboration Ale’ days,” he said.

Craft brewing, already growing steadily, roughly doubled from 2011 to 2014, according to data from the Brewers Association. It accounted for nearly $27 billion in sales out of a $100 billion U.S. beer market in 2021.

With taprooms largely closed during the pandemic, brewers often turned to packaging more of their beer and selling it through grocery stores, pick-up orders, or even delivery, putting more trademarks “in the wild,” Drumm said. The dip in overall sales largely proved manageable. And as pandemic effects subsided, brewers could worry less about survival and more about protecting branding turf, he said.

The sheer numbers combined with the adult-only, inhibitions-lowering nature of the product all but necessitate boundary-pushing creativity. Stone has long prominently sold its “Arrogant Bastard Ale” adorned with a sneering demonic gargoyle. Other brewers’ labels include Hoptimus Prime, Brew Free or Die IPA, Mass Whole Lager, Weirdo with a Beardo Scotch Ale, and A Deal with the Devil.

“Marketing is key for these micro craft brews. That’s how they’re standing out,” trademark attorney Eric Ball of Fenwick & West LLP said. “They’re more likely to enforce their marks because it’s their way to stand out in the crowd.” 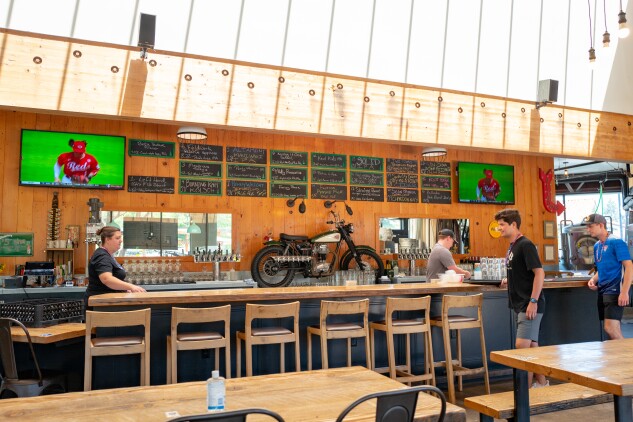 Stone potentially avoided another lawsuit by not just running with its 2019 “Enter Night” pilsner featuring Metallica’s iconic font, but instead partnering with the metal band in advance.

That’s not to say Stone shies away from litigation in general. One of the largest craft producers in the country, it has launched more than 100 proceedings at TTAB to challenge trademark applications and registrations, often against smaller brewers or even businesses unrelated to beverages.

“They go after a lot of small brewers with marks that have anything to do with ‘stone.’ They’re just as bad” as larger trademark bullies, Drumm said.

Stone CEO Maria Stipp said in a statement that it files TTAB oppositions “to oppose marks that are too similar to ours—as companies routinely do.” She also said Stone “far more often” has “amically” resolved trademark issues with mutually acceptable solutions, and noted the MillerCoors suit was its first trademark complaint in federal court.

Drumm said that it’s important to “know the bullies,” noting that Monster, for example, has a history of aggressively litigating its Monster Energy trademarks. It has filed scores of lawsuits against competitors and businesses in unrelated industries.

“You have to look across the industries and look forward, as everyone’s expanding to other arenas” to minimize risk, attorney Dalier said.

The beer giant sent a costumed medieval town crier to read the letter from the ads’ fictional king threatening “a private tour of the Pit of Misery” if Dilly Dilly didn’t see a limited run. The crier also gave the brewery owners two Super Bowl tickets.

That case highlighted Ball’s point that brewers can likely take a bit more of a risk during limited runs of beers, and in cases where the potentially pun-infused beer name primarily appears on a taproom chalkboard.

Craft brewers have become increasingly aware of the need to research and ensure their potential trademarks don’t infringe on what’s already out there after a spate of lawsuits during the boom, Drumm said.

But while “breweries 5-10 years old remember,” he said about 1,000 breweries are still being added annually. Those haven’t been around long enough to see peers learn the hard way they need to ensure the ability to secure rights by combing the trademark registry or the internet in general.

“Do a Google search,” Drumm said. “You’d be surprised how many breweries still don’t do it.”

To contact the editors responsible for this story: at csaenz@bloombergindustry.com; at ataylor@bgov.com