A woman reads a book on her iPhone.
Photo by Robert Nickelsberg/Getty Images

“Name something that should be illegal but isn’t.” When this TikTok trend made its rounds last year, many users mentioned Z-Library, a popular “shadow library” with millions of books available for permanent download at minimal or no cost.

If this seems too good to be true, that’s because it is.

Shadow libraries such as Z-Library and the Library Genesis Project—also referred to as “pirate libraries"—often directly infringe copyrights held by authors and publishers, cutting into profits for the billion-dollar industry. Pirated e-books have depressed legitimate book sales by as much as 14%, according to one study cited in Authors Guild’s testimony to Congress.

“I’ve heard authors say, ‘I put out a book in the morning and it was on Z-Library in the afternoon,’” said Umair Kazi, director of policy and advocacy at The Authors Guild.

Courts in India and France recently ordered internet service providers to block Z-Library, finding that the site violated copyright laws. Although authors and publishers can pursue similar litigation in the US, the process is time-consuming and costly, and judgments can be extremely difficult to enforce.

Discussions are cropping up again on Capitol Hill for potential legislation aimed at preventing online piracy through domain name blocking, though a previous measure called the Stop Online Piracy Act failed nearly a decade ago after significant pushback, stakeholders said.

“I don’t think rights owners have given up on the idea,” said Devlin Hartline, a fellow with the Hudson Institute’s Forum for Intellectual Property. “I think they will be more careful if there is a push for similar legislation.” 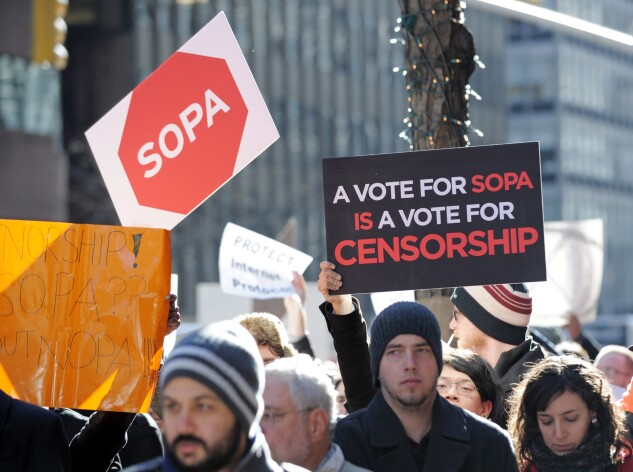 People hold signs at a protest against proposed laws to curb internet piracy outside the offices of US Democratic Senators from New York Chuck Schumer and Kirsten Gillibrand on Jan. 18, 2012, in New York.
STAN HONDA/AFP via Getty Images

The Library Genesis Project—or Libgen—has “a 33 terabyte repository of pirated ebooks, articles, comics, and other copyrighted works” and is extremely popular among college students, “who share links to its mirrors on social media as a means for acquiring free books,” according to a 2021 Authors Guild report to the US Trade Representative’s Office.

The trade representative didn’t respond to a request for comment.

In October 2021, the domain libgen.rs ranked No. 2758 globally on Amazon’s Alexa global engagement rankings, among an estimated more than 1.8 billion active websites, the report said. Z-Library’s z-lib.org ranked No. 8182.

“I don’t think a lot of people might even know that it’s a pirate site,” Kazi said, referring to Z-Library. “So, there’s a conflation of free e-books and piracy that we see happening a lot, especially on the internet.”

Website takedown notices sent by authors and publishers under the Digital Millennium Copyright Act can be ineffective, as pirate sites don’t abide by them.

Libgen.io, a now-defunct Libgen domain, has received more than 10,000 DMCA takedown notices, and the still-active libgen.is has over 5,000. One of Z-Library’s principal domains, 1lib.us, has been hit with more than 10,000 notices.

Internet service providers and web hosts can also receive DMCA notices tied to sites accused of piracy, and generally can escape contributory copyright infringement liability if they comply with them. They’re otherwise not required to take action against the sites unless compelled by court order.

“It remains difficult for publishers to address this problem because there isn’t an efficient and effective remedy currently available to them in the United States,” said Lui Simpson, senior vice president of global policy for the Association of American Publishers, adding that the industry diverts resources to curb digital piracy. “There’s a loss there for all of us because that could’ve gone into bringing a new work to market.”

If a copyright battle against a shadow library moves to court, establishing US jurisdiction is one of several legal hurdles that authors and publishers must overcome.

Many of the site operators are based in countries outside of the US, according to Jonathan Band, an intellectual property attorney and founder of Jonathan Band PLLC.

“They’re beyond the reach of US copyright law,” he said. “In theory, one could go to the country where the database is hosted. But that’s expensive and sometimes there are all kinds of issues with how effective the courts there are, or if they have a good judicial system or a functional judicial system that can enforce orders.”

Even when jurisdiction is established—based on site accessibility and use in the US—enforcing a court order against anonymous operators presents a separate problem.

For example, Elsevier, one of the world’s largest science publishers, sued Libgen and another site called Sci-Hub in 2015 over copyright infringement. A New York federal court awarded $15 million to Elsevier in a 2017 default judgment, and issued a permanent injunction against the sites.

The sites haven’t paid the damages, however, and moved to mirror sites, according to the 2021 Authors Guild report.

Far From Fair Use

Fair use, a defense against copyright infringement, permits people to use copyrighted materials for educational, scholarly, news, or criticism purposes.

Vivek Jayaram, an IP professor at the University of Miami Law School and founder of Jayaram Law, said shadow library users could argue that information shouldn’t be limited to those privileged enough to afford it.

Fair use has been raised in a separate copyright dispute involving the Internet Archive, a digital lending library that removed limits on borrowing 1.4 million e-books during the Covid-19 pandemic.

Unlike that novel case, attorneys say the fair use defense isn’t applicable to shadow libraries that permit permanent downloads.

“It looks like a pretty clear market substitution,” said Mark Lemley, director of the Stanford program in law, science, and technology, whose books are also available on shadow libraries such as Z-Library.

“We are losing profits from those books,” Lemley said. “I’m not personally too worried about it. I understand these things happen and I’m happy to have people read it. But I think authors are entitled to feel differently about it. And the libraries shouldn’t get to make that choice for them.”

Domain name blocking presents one solution to shadow library piracy, according to Mary Rasenberger, CEO of the Authors Guild.

“People hate the word website blocking, but that’s essentially what you want,” she said. “You want internet service providers to be able to prevent users from accessing these sites. That’s what they do in other countries, and that’s what we’re asking for here, where a website is clearly only devoted to piracy.”

Domain blocking was originally proposed through the Stop Online Piracy Act in 2011, a controversial bill that attempted to expand the ability of law enforcement to combat copyright infringement.

The bill would have allowed the FBI to seek injunctions against foreign pirate sites stealing US intellectual property. It also would have given copyright owners an avenue to seek court orders barring advertising networks and payment facilities from conducting business with infringing sites, and stopping search engines from linking to them.

It ultimately went nowhere after receiving heavy pushback from free speech and innovation proponents who were concerned that the bill could have negative impact on online communities and permit the removal of entire domains over single posts.

However, IP lawyer Band said, “there are discussions underway now to find some other kind of legislative approach that would allow domain name blocking in this country.”

Such legislation probably won’t be introduced in Congress until a new session begins next year.

Any potential proposals to curb piracy in the future will have to look very different than SOPA, attorneys say.

Hall Estill attorney Michael H. Smith said it remains to be seen how effective domain name blocking would be, given that shadow libraries are able to create new domains.

“It’s just kind of a challenge to try to shut them down right now because of the way they’re able to move around,” he said.