Judges at an administrative patent tribunal want to see younger, more diverse attorneys arguing before them, and they’re pushing firms to take advantage of a program designed to make that happen.

Not enough firms are using the U.S. Patent and Trademark Office’s Legal Experience and Advancement Program, also known as LEAP, which gives an edge to parties who have a less experienced attorney participating in oral argument, Patent Trial and Appeal Board judges said. PTAB judges see it as a way to boost lawyers who are typically underrepresented in the patent bar and haven’t had oral argument opportunities.

“We see this program as creating the pipeline for more diverse people to first argue before us, and then they’ll have the experience,” said Michelle Nerozzi-Ankenbrand, a senior lead administrative patent judge at the board. “So when they’re in district court, as well, or at the Federal Circuit or beyond, they can point to this experience and say to clients and other partners at the firm, ‘look, I’ve made this argument before. You can trust me, and I’ll be able to make this argument for you in district court and other cases.’”

There’s room for more firms to participate, as some need to come around to feeling comfortable with a junior lawyer having a significant role in a high-stakes argument and others need to convince clients of the benefits, the judges said.

The firms that use the program the most so far tend to specialize in intellectual property and are frequent flyers at the PTAB, said Jacqueline Wright Bonilla, the board’s deputy chief judge. Those include Finnegan, Henderson, Farabow, Garrett & Dunner LLP and Sterne, Kessler, Goldstein & Fox PLLC.

Parties who have a LEAP practitioner on their team get an extra 15 minutes of argument time, and senior attorneys can step in if needed. Sixty-nine firms in total have participated since the program’s inception two years ago, but PTAB judges want to see it used more often. 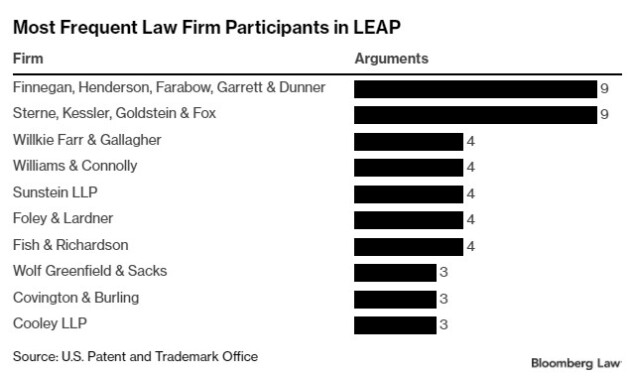 Firms that have become regulars “have more confidence in knowing what we’re all about,” Bonilla said. “They’re trying to be leaders in the firm both in terms of the practice and, presumably, in the diversity of their practice as well.”

The LEAP program was designed to encourage clients and firms to use less experienced lawyers, who are generally more diverse than the more senior partners, said Chief Judge Scott Boalick.

PTAB judges had been watching what district court judges were doing and noted that some have issued standing orders that articulate policies and procedures promoting speaking opportunities for junior attorneys.

Judge of the U.S. District Court for the District of Northern California, for instance, requires specific plans for how law firms with more than 50 attorneys nationwide will involve junior attorneys. Other judges in the district—a busy patent venue—will guarantee an oral argument if a junior attorney is arguing.

What pushed them to create LEAP, though, was a 2019 report that found women account for only 10% of attorney appearances in post-grant proceedings before the PTAB. An updated version of the study in March 2022 showed that women only made slight gains, accounting now for 12% of appearances.

“We were shocked by the result,” Bonilla said.”That was the fire under us to do what we had been thinking about already.”

Getting the chance to participate in an oral argument early in an attorney’s career means clients later on will be more comfortable with that lawyer taking on their case at district courts or at the U.S. Court of Appeals for the Federal Circuit, judges and attorneys said. As attorneys move up the ladder without oral argument experience, it’s more difficult to find opportunities to try for the first time.

That leaves attorneys who focus on patent prosecution and want to make a switch, those who have stepped away to raise a family or other personal reasons, or were changing careers, with a bigger lift to convince clients to give them a chance.

LEAP is the “best way to try to grow the pipeline, particularly for women and diverse attorneys,” said Erika Arner, a partner at Finnegan, said.

The challenges now to more participation seem to be clients or law firms who balk at letting a junior attorney argue in a dispute with millions of dollars at stake, Bonilla said. Clients themselves might be requesting specific attorneys who have significant arguing experience at the PTAB.

It can also be intimidating for less experienced lawyers to speak up to ask to participate in the program, especially when there’s “a lot on the line,” Boalick said. The design of LEAP—combining extra arguing time with the ability for senior attorneys to step in—is meant to create a win-win scenario for the firms, lawyers, and clients, he added.

“It takes some bravery sometimes to speak up,” Boalick said. “We’re trying to make that barrier lower to speak up and maybe even be in the place where the partners say, ‘Hey, wait a minute, why don’t you take this because it’ll give us an advantage.’”

While it may be hard for some clients to justify and understand the benefits, other companies are also looking to build the pipeline of women and diverse attorneys in IP, Arner said. It’s “becoming an easier sell,” she said.

Clients can be the most convincing to law firms when they tell the firms they need to have a diverse team on their case, Boalick said.

“Certain clients are helping and when they do that, it does help because the law firms listen,” he said. “When business is on the line, that definitely gets their attention.”

LEAP practitioners, often the attorneys who wrote the briefs in the first place, tend to be more knowledgeable on the record of the case and have the answers to technical questions that PTAB judges want to hear, Arner said.

That can actually improve the quality of arguments, especially as some more experienced attorneys have given less than stellar performances at PTAB. Sometimes the partner that’s arguing the case turns to the co-counsel for help answering a question anyway, so that attorney might as well be arguing, Nerozzi-Ankenbrand said.

Firms still want to provide the highest level of advocacy for their clients, Arner said, and this program helps facilitate that.

“It’s not a charity case at all,” Arner said. “They’re knocking it out of the park.”

To contact the editors responsible for this story: at ataylor@bgov.com; at jcasuga@bloomberglaw.com