The public search facility at the U.S. Patent and Trademark Office headquarters in Alexandria, Va. Requests for ex parte reexaminations at the patent office have been going up.
Photographer: Andrew Harrer/Bloomberg

Companies having trouble convincing a patent office tribunal to review a patent’s validity are dusting off an old playbook, and taking a renewed interest in reexaminations.

Requests for ex parte reexaminations at the patent office plummeted following the 2012 introduction of inter partes review, falling as much as 80%, according to U.S. Patent and Trademark Office data. Patent examiners in a reexam look at the validity of claims in an issued patent, and can reject claims that are unpatentable.

But the proceedings are showing signs of life, with the number of requests beginning to trend upward. 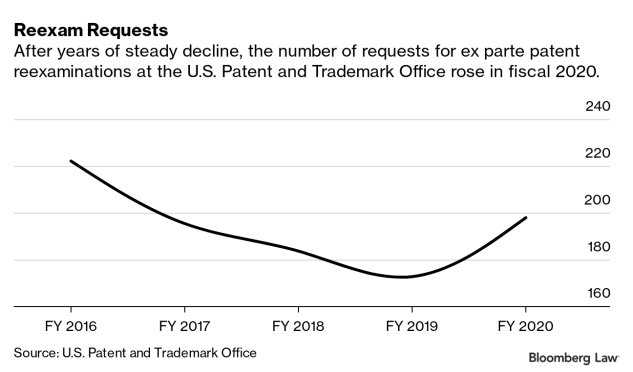 Kenneth Weatherwax, an attorney at Lowenstein & Weatherwax LLP in Los Angeles who often represents patent owners in PTO proceedings, said his ex parte reexamination work has “increased dramatically” over the past 18 months.

More attention is being paid to the decades-old proceeding by accused infringers, particularly companies cut off from inter partes review by the NHK-Fintiv rule, attorneys say. The much-debated rule has made it harder for companies to get IPRs after being sued, and reexams can be a way to hedge their bets.

“Discretionary denials, which we’re seeing more and more, are likely the cause,” Jennifer Huang, an attorney at Fish & Richardson PC in Minneapolis, said of the increased reexam interest. “The ex parte reexam provides an alternative tool to potentially invalidate a patent outside of litigation.”

Introduced in the early 1980s, reexaminations allow anyone to ask patent office examiners to take another look at an issued patent. Unlike IPRs, trial-like proceedings in front of patent judges, reexams are largely between the patent owner and agency examiners, without third-party involvement.

Reexam decisions can be appealed by the patent owner to the PTAB.

The number of requests for reexams rose from 163 in fiscal 2019 to 198 in fiscal 2020, the first increase in reexam requests in several years. The upward trajectory continued in the first quarter of 2021, putting the office on pace for more than 200 requests in the current fiscal year, agency data shows.

Unified Patents, a membership organization that challenges patents at the patent office, both in inter partes review and reexam, has separately projected an 8.8% year-over-year increase in reexam requests in 2021.

A likely driving force behind the uptick appears to be a combination of the patent office’s NHK-Fintiv rule and the rise of the U.S. District Court for the Western District of Texas as a major hub for patent lawsuits, Jeffrey Townes, an attorney at Cozen O’Connor LLP in Washington, said.

“I think defendants in many cases thought they could file these IPRs and are not able to do it,” Townes said. “They’re saying, ‘What else can I do? Maybe I’ll roll up my sleeves and put a little bit more money into these reexaminations than I was doing before.’”

The NHK-Fintiv rule is a product of agency precedent established over the past couple of years, and allows the PTAB to decline to institute inter partes review of a patent when a parallel infringement case in district court is far along.

By placing an emphasis on the speed of the parallel proceeding, the rule has made it harder for companies to get IPRs after they are sued in the Western District of Texas’ Waco division, where the judge has a fast time to trial and is reluctant to pause infringement cases for PTAB review.

The PTAB has denied numerous requests for review under the NHK-Fintiv analysis.

There are limits on a challenger’s ability to request reexamination of a patent following a final decision from the PTAB in inter partes review. But companies have more freedom if the board decides not to review the patent at all.

Other patent office actions may have also contributed to the interest in reexams.

The agency has cracked down on multiple petitions for IPR review, saying two or more simultaneous challenges to the same patent can burden the PTAB. It has also taken steps to limit staggered petitions that patent owners argue can be an abusive strategy.

The PTAB exercised its discretion to deny more than 220 challenges without considering the substance of the challenge, according to a study by Unified Patents.

“It would certainly make sense in many cases to consider repackaging that IPR that’s already put together and refiling it as an ex parte reexam so that the reexamination unit can consider those substantive grounds,” said Elisabeth Hunt, an attorney at Wolf Greenfield & Sacks PC in Boston.

While reexams may provide an attractive backup plan at the patent office, there can be downsides. In addition to being sidelined after the challenge, there is no set timeline for reexams like there is for IPR. Also, unlike an IPR, the proceeding will continue even if there is a settlement.

“If settlement is on the horizon and one of the parties decides to file an ex parte reexam, it might sour those negotiations,” Huang said.

But for companies intent on challenging a patent, a PTAB denial on the merits can also be reason to consider reexam, looking at whether there are new arguments to address the shortcomings that the board identified in its institution decision.

“That may trigger an additional prior art search and a new ground that the accused infringer would want to raise,” Williams said.

Such challenges likely wouldn’t be allowed at the PTAB, which has consistently denied petitions when it felt the challenger was looking to use old decisions as a “road map.”

Some patent owners question whether the patent office should take steps to limit this type of approach. Weatherwax said he’s argued to the PTO that certain reexam requests can be harassing, similar to multiple IPR petitions. But the complaints haven’t gotten much traction.

“I have seen no sign that the PTO, at the moment, is terribly interested in limiting repetitive use of reexams,” Weatherwax said.