She never once presented a case at the U.S. Court of Appeals for the Federal Circuit before leaving private practice. During a subsequent clerkship at the court, she watched attorneys from the Patent and Trademark Office stand up for arguments.

And many of them were women.

Eventually that exposure led her to a job in the agency’s solicitor’s office, where over the past 10 years she argued dozens of Federal Circuit cases and rose to the position of deputy solicitor.

Women accounted for 65% of the patent office attorneys arguing at the Federal Circuit over the last 20 months, according to data collected by Bloomberg Law. Attorneys arguing from private practice over that same time period were only women 13% of the time.

While Big Law has spent money and effort to increase diversity, the patent office seems to have found a formula for increasing female representation that actually works.

Yet only about 20% of all attorneys arguing in front before the court are women. 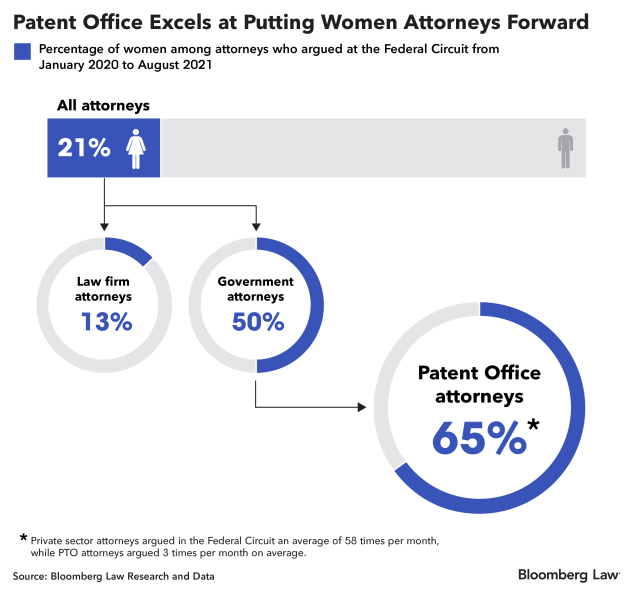 The low percentage of women is often attributed to the fact that two-thirds of the court’s docket are patent law cases that can involve complex questions of science or engineering—fields until recently dominated by men.

Women are also traditionally underrepresented in appellate practice overall, where often the senior partner with the most experience at the lectern gets the arguments.

She and fellow Temple Law professor Paul R. Gugliuzza coauthored a paper that found that 87.4% of patent appeals at the Federal Circuit over the past decade were argued by men.

Rebouché said the patent office’s better numbers have to do with its “much more egalitarian ‘You wrote the brief, you argue it’ system.”

Rasheed and the agency’s recently departed Acting Deputy Director Coke Stewart backed that up. They pointed to the near gender-parity in the solicitor’s office, and said new attorneys typically argue at least one appeal in their first year.

“I think that perhaps it is a point of novelty for our office that we distribute our cases relatively evenly,” even compared to other government shops that assign arguments based on seniority, Rasheed said.

Stewart worked as patent litigator at private firms for 14 years and never argued a case at the Federal Circuit until she joined the solicitor’s office, where she argued 12 before moving up the ranks in the agency. She left the agency Aug. 20 to become a law professor.

Stewart said attorneys in the solicitor’s office use a team system that allows for better work-life balance.

“We have a system where we have a lead and a second chair in all our cases, so that if something happens in the case you always have somebody backing you up and supporting you,” she said. “It’s a little bit different than private practice where if you have something come up, you’ve got to cancel your vacation or work late that night even if you have a conflict.”

That support extends to helping attorneys prepare for Federal Circuit arguments, Rasheed said. “A lot of the time, the moots are actually a lot harder than the actual argument,” she said.

Rasheed said hasn’t had to think consciously about diversity because they never have a shortage of female talent among candidates who apply for job openings.

And Stewart points out the high retention rate as well. “When you look at the lawyers in private practice, it usually starts out pretty even with the classes and then the female attorneys end up leaving over time,” she said.

But that doesn’t hasn’t happened in her time at the patent office, where she said attorneys are more likely to leave the solicitor’s office for leadership positions within the agency or on the Patent Trial and Appeal board than look elsewhere.

“When you have this kind of rigorous, serious work that’s appealing to people, and you provide a positive culture and have reasonable hours, things will play out,” Stewart said.

Stewart suggested it would play out that way in the private sector, too, if the culture was more supportive.

And there’s a business case for putting up women to argue.

The agency’s system ensures that the oral advocate is the attorney who knows the case the best, rather than someone more senior swooping in at the last minute, Rasheed said. The Federal Circuit is a notoriously hot bench where judges ask weedy questions about the science, the procedure, and the record, she said.

“It is always important from your business advocacy perspective that the judges are also seeing that reflected in the advocates and the practitioners that appear before them,” Rasheed said.

“We are super proud that we have so many great female appellate advocates in our office, and we don’t want that to be a secret,” Rasheed said. “We want folks to know that because I think it only helps influence others to also think about what they might be doing differently and what they could be doing better.”