Real Estate investors believe there's a wealth opportunity in a tax break meant for the poor in areas such as the Port Morris neighborhood of the Bronx borough of New York, U.S. Others, like Angela Rodell, chief executive officer of Alaska Permanent Fund Corp., believe it would be hugely beneficial in encouraging infrastructure investments in her sprawling state.
Photographer: David 'Dee' Delgado/Bloomberg via Getty Images

A number of Big Law firms have created “pop up” working groups of tax, real estate, and private funds lawyers to advise clients looking to jump in on the investment action.

The law set 8,764 opportunity zones in mostly low-income tracts designated for tax breaks. The law allows investors, including banks and real estate developers, to delay or even reduce their taxes on profits from stocks and other assets if they invest in those areas.

As it turns out, these opportunity zones can be a boon for Big Law firms and smaller firms with a strong emphasis on multidisciplinary practices.

The opportunity zone teams are intended to exist only for limited time because investors must act by Dec. 31, 2026, and the pop-up teams tackle thorny issues relating to the new law, which attorneys call unusually broad.

For instance, there’s no limitation on the amount of gain an investor can shelter, and there are very few restrictions on types of businesses that can operate in an opportunity zone, said Mark S. Edelstein, the chair of Morrison Foerster’s global real estate group in New York. Edelstein is part of the firm’s informal opportunity zone team of about 25 attorneys from their tax, real estate, and private funds practices that is trying to spin its varied expertise into new work and new clients.

The only businesses not allowed are “sin” businesses, he said, which traditionally include casinos, liquor stores, and massage parlors.

The teams are trying to capitalize on this new client service by figuring out how to advise clients on it and how to get hired, Edelstein said.

Clients include investors in opportunity zone funds, banks, real estate developers, business owners, and those who want to structure the funds.

“That’s what law firms do. We provide services and get paid,” he said. 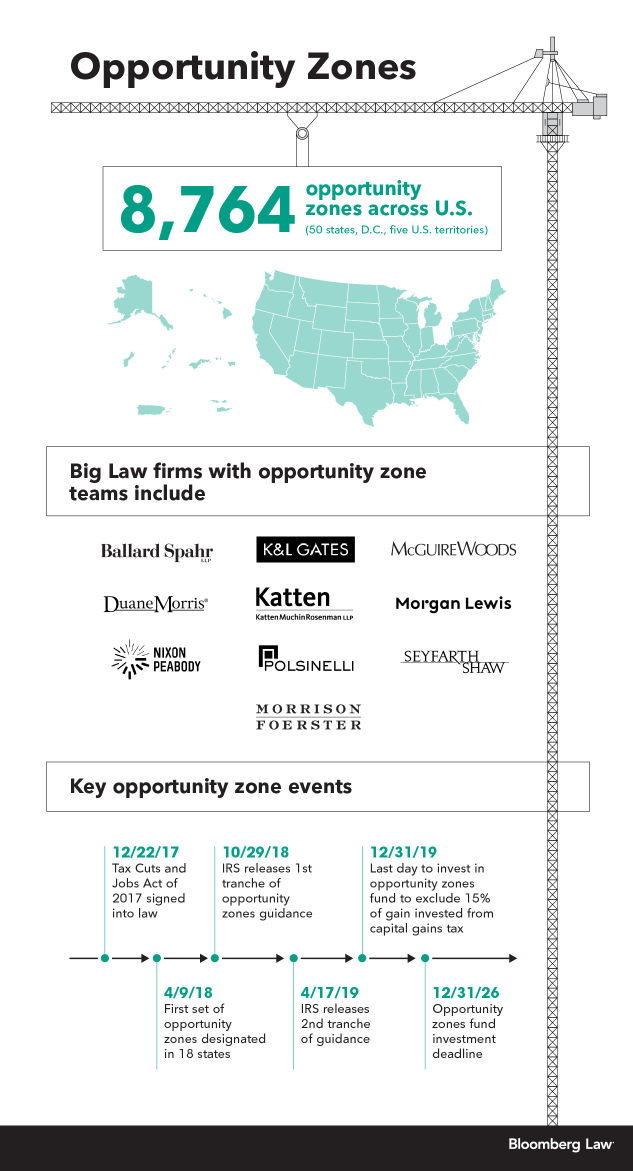 But opportunity zone teams aren’t for every firm. The tax provisions are “broad,” “complicated,” and, of course, new. Firms need that tax expertise but also a broad bench of attorneys in other areas.

Those with strong real estate and capital markets groups with a “talented and entrepreneurial” tax group are “very-well positioned” to effectively guide their clients in navigating the opportunity zone rules, Seyfarth Shaw’s Steven R. Meier said. Meier, who’s located in Chicago, is chair of Seyfarth’s corporate department and co-chair of the firm’s tax practice, as well a member of the firm’s opportunity zones team.

Lawyers can add a lot of value because these aren’t necessarily deals where investors have “tried and true” experience, like an M&A sponsor who’s done 100 such deals before, said Adam J. Tejeda, a partner in K&L Gates’ New York office and a member of its opportunity zones team.

“It’s a new product and we need to be proactive, ahead of the curve,” Morrison & Foerster’s Edelstein said.

And for a number of firms with opportunity zone teams, the approach—using an ad hoc, multidisciplinary group to tackle an issue—is familiar territory.

McGuire Woods has groups working on projects like public private partnerships, new markets, and energy project development, said Douglas E. Lamb, a partner in the firm’s Richmond office and a member of its opportunity zones team.

Opportunity zone work has been steady since the IRS released its first set of clarifying regulations in October. Big Law partners who spoke with Bloomberg Law business has increased since the second set was released in mid-April and will continue to pick up steam until the end of the year.

“We see more activity starting to happen,” Edelstein said. And with the newest set of regulations, there will be more deals, he said. The pop-up team will have to identify for clients the risks and benefits and how to navigate between them, he said.

As for investors, the moment is now, said Gregory A. Riegle, a partner with McGuire Woods’ real estate practice in Tyson’s Corner, Va., and a member of its opportunity zones team.

Those who invest any profits made on stocks or other assets in an opportunity zone fund within 180 days of the sale of the assets and before Dec. 31, 2019, can cut the profit subject to tax by 15 percent if they keep their money in that fund for seven years.

Although clients will get the maximum benefit by investing by the end of this year, opportunity zone work for law firms has a “longer shelf life than you’d think,” said Mary Burke Baker, a government affairs counselor with K&L Gates in Washington and a member of the firm’s opportunity zones team.

Investors can sink money into a fund until the end of 2026 and still get the biggest benefit: the tax-free treatment of capital gains that they have when they sell their interest in the opportunity fund, she said. To take advantage of this benefit, the money must remain in the fund for at least 10 years.

And while law firms anticipate an increase in work as deals accelerate, there’s the potential for even more down the road—and it’s work with which they’re quite familiar.

“We suspect there are going to be a lot of lawsuits coming out of this,” Edelstein said.

- With assistance from Lydia O’Neal