A view of the Ninth U.S. Circuit Court of Appeals on June 12, 2017 in San Francisco, Calif.
Photographer: Justin Sullivan/Getty Images

President Donald Trump is closer to filling two vacancies to an appeals court he has vilified, with nominees fiercely opposed by Democrats. 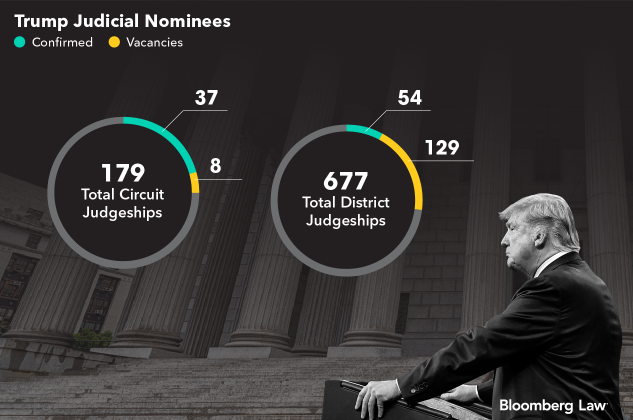 Trump has called out the San Francisco-based U.S. Court of Appeals for the Ninth Circuit for adverse rulings on his policies, including immigration.

The Senate Judiciary Committee on Thursday cleared Jenner & Block partner Kenneth Lee and Daniel Collins, a partner at Munger, Tolles & Olson, both nominees to the Ninth Circuit, on party-line votes of 12 to 10. They now await votes by the full Senate.

The nominees lacked approval from Dianne Feinstein and Kamala Harris, both Democratic senators in their home state of California, in the form of “blue slips.”

Graham said he would look further into the issue of whether he has sufficient ties to California to fill a vacancy designated for that state.

Also Thursday, the Senate confirmed Roy Altman to the U.S. District Court for the Southern District of Florida by a vote of 66 to 33.

He is the first trial court judge confirmed in 2019, and the first confirmed after the Republican-led Senate on Wednesday decreased the amount of debate time required for district nominees from 30 hours to two hours.

Democrats fiercely objected to the rules change, saying Republicans have turned the Senate into a “conveyor belt” for approving conservative Trump appointments. Republicans say Trump has a right to fill appointments, and accuse Democrats of obstruction.

“When it comes to Trump, getting consensus is really hard. I’m not blaming one side or another. It’s just really hard,” Graham said.

Feinstein, the committee’s top Democrat, or ranking member, said she opposed Collins over concerns about his temperament and history of taking litigation positions that aimed “to overturn precedent and push legal boundaries.”

She also said that Lee failed to disclose past writings critical of affirmative action, which raised concerns about his candor and judgment.

Democrats said holding the vote for the nominees despite the lack of blue slips was a departure from a Senate tradition honored before Trump’s presidency.

Feinstein said blue slip objections were always honored by Democrats when her party was in the majority.

But Graham quoted Feinstein’s 2001 remarks made in opposition to the blue slip.

Feinstein said then that she would be happy to do away with the blue slip policy because it was often used to obstruct nominees based on politics, according to Graham.

Blue slips have been a Senate custom for a century in which judicial nominees would only move forward on the recommendation of both home-state senators who’d register their support or opposition on a blue form.