Federal courts are grappling with how to apply the Supreme Court's 2017 decision in a copyright design case.
Photographer: Andrew Harrer/Bloomberg

Federal courts are struggling to follow the U.S. Supreme Court’s lead on design copyrights, more than two years after the court ruled that chevrons on a cheerleading uniform could be copyrighted.

The justices, in Star Athletica LLC v. Varsity Brands Inc., established a two-part test in which all or part of the design of functional objects can be copyrighted if the design can be separated from the object itself.

Despite the test, attorneys say, it’s still tough to predict how courts will rule on whether designs—such as a combination of colors, lines, and shapes on a full-body banana Halloween costume, or a chalk holder made in a cartoonish pencil shape—are copyrightable.

“Even with a single test, like almost every aspect of copyright analysis, the test and its application are fact-specific, so there is not as much certainty in the outcome of using the Star Athletica test,” Jeffrey R. Cadwell, an intellectual property partner at Dorsey & Whitney LLP in Minneapolis, said.

Judges still have to decide whether the design of an object can be separated from the object itself, and stand alone as an artistic work.

So far, federal district and appeals courts have extended copyright protection to designs in eight out of a dozen cases since the Supreme Court’s March 2017 ruling, Bloomberg Law data show. The banana costume, a bird design on a clothespin, and colored geometric shapes on car seat covers were among the designs courts deemed copyright-eligible.

Other courts have blocked copyrights for that the pencil-shaped chalk holder design, geometric shapes on a hookah water container, and various features of a personal planner, such as lined pages and calendars.

Creators have had more success protecting specific elements than an object’s entire design, the data show.

The recent cases demonstrate that plaintiffs seeking protection for the design features of a useful object should be prepared to identify those features, Joshua M. Dalton, who co-leads Morgan Lewis & Bockius LLP’s trademark and copyright litigation practice, said. 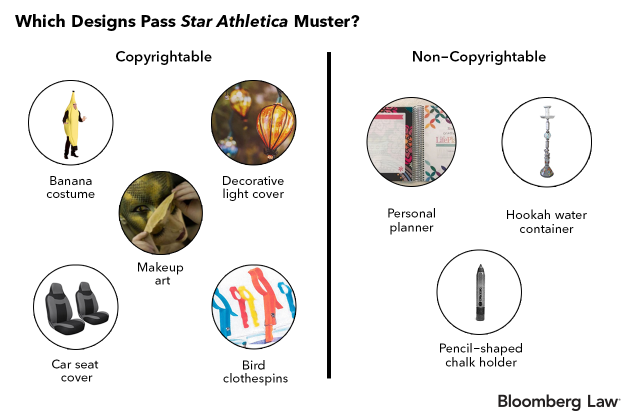 Under the Star Athletica test, all or part of an object’s design that serves functional purposes is copyrightable if it can stand on its own as a two- or three-dimensional work and qualify as a pictorial, graphic, or sculptural work of art if imagined apart from the object itself.

Using the test, federal courts have found that bear and elephant designs on apparel, color-block seat covers, and the decorative covers of an ornamental light set all can be copyrighted because someone could imagine them separately from the objects.

Even the bird design on a simple clothespin can be protected because, once removed, it qualifies as a non-useful, sculptural work, according to the U.S. District Court for the Central District of Illinois in Design Ideas Ltd. v. Meijer Inc.

The U.S. Court of Appeals for the Third Circuit Aug. 1 held in Silvertop Associates Inc. v. Kangaroo Manufacturing Inc. that the combination of colors, lines, and shapes on the banana Halloween costume can exist apart from the costume as a separate sculpture—and get a copyright. But the functional arm, leg, and head holes in the costume aren’t protected, the court said.

Judges in other cases said they couldn’t mentally separate an object’s claimed artistic features from its useful ones.

Lanard Toys Ltd. sued Toys ‘R’ Us Inc. for allegedly infringing the pencil design of its chalkholder, but the U.S. District Court for the Middle District of Florida said the design wasn’t protectable as separate art.

“When one imagines the pencil design as a separate work of sculptural art, one is merely picturing a replica of the chalk holder,” the court said.

Lanard argues that the court wrongly relied on a discarded theory that a creative feature is copyrightable if an object is still functional without it.

Star Athletica is “clear enough,” said Benni Amato of Gordon Rees Scully Mansukhani LLP’s intellectual property practice group, who is counsel for Lanard. But the district court’s decision “was not done in a way that conforms to the test that the Supreme Court has elucidated,” she said.

Counsel for defendants Toys ‘R’ Us and Dolgencorp LLC declined to comment.

In Inhale Inc. v. Starbuzz Tobacco Inc., the U.S. District Court for the Central District of California denied protection for the geometric shapes on a hookah water container because the plaintiff sought protection for the way the shapes as a whole were arranged to form the object.

In Utah, EC Design is appealing the dismissal of claims that Craft Smith LLC copied its personal planners. The U.S. District Court for the District of Utah ruled in Craft Smith LLC v. EC Design that the compilation of “planner parts” such as calendars, lined pages, and expression templates can’t “possibly exist separately” from the planner as a whole.

Some lawyers say they aren’t surprised that some purportedly creative objects don’t get copyrights, no matter how consistently Star Athletica is applied.

“Sometimes you can apply the test and the court will say no,” Dalton said.