The Patent Trial and Appeal Board has been declining to review patents that are part of an infringement investigations at the U.S. International Trade Commission.
Photographer: Andrew Harrer/Bloomberg

Companies facing patent infringement allegations at a U.S. trade agency are having trouble convincing the Patent Trial and Appeal Board to review the patents’ validity.

The PTAB, a U.S. Patent and Trademark Office tribunal, in recent months has repeatedly exercised its discretion and declined to review patents that are part of infringement investigations at the U.S. International Trade Commission.

, , and are among the companies that have been shut out of the PTAB’s inter partes review (IPR), a program that accused infringers traditionally lean on to challenge patent validity.

The decisions applied the NHK-Fintiv rule, which emphasizes the speed of the parallel proceeding and the willingness of the other tribunal to pause its case. Both factors cut against review when the parallel case is at the ITC, an agency known for moving fast.

“If the Fintiv factors are strictly applied when there’s a parallel ITC proceeding, it will be very difficult—and nearly impossible—for ITC respondents to get an IPR proceeding instituted,” said Libbie DiMarco, an attorney at Wolf Greenfield & Sacks PC in Boston.

Garmin and others have questioned the board’s approach in these cases, arguing it’s inappropriate for the patent office to defer to an agency that can’t actually invalidate a patent. They also say it’s a waste of resources, and allows patent owners to continue to sue over potentially invalid patents.

A panel that sets precedent for the PTAB has been asked to hear the issue.

The NHK-Fintiv rule gets its name from two PTAB decisions that have been designated precedential. The first, NHK Spring v. Intri-Plex, was designated in May 2019. It found the late stage of a parallel district court case can weigh against review.

The board’s decision in Apple v. Fintiv, designated precedential a year later, sets out factors for PTAB judges to consider when deciding whether to deny review based on the state of a parallel case. These include the proximity of the trial date to the board’s deadline for a decision, and whether the other proceeding has been stayed. 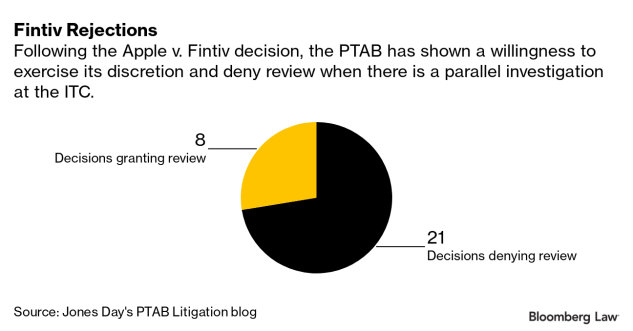 Before Fintiv, the PTAB routinely reviewed patents involved in an ITC investigation, attorneys said. In one example, the board agreed to look at ’s challenge to a Sipco LLC patent, even though the ITC investigation was in its late stages.

The board noted, in that August 2019 decision, that the ITC’s patent decisions aren’t binding on district courts or the patent office. Even if the ITC decided the patent was invalid, the board said, that determination isn’t enforceable as to the PTO and can’t result in the cancellation of any claims.

“Thus, while an ITC decision in the co-pending investigation may inform our decision, it does not render our proceeding duplicative or amount to a waste of the board’s resources,” the board added.

But Fintiv marked a shift in how the board treats ITC trial dates.

Even “though the office and the district court would not be bound by the ITC’s decision, an earlier ITC trial date may favor exercising authority to deny institution under NHK if the ITC is going to decide the same or substantially similar issues to those presented in the petition,” the board wrote in Fintiv.

Kenneth Weatherwax, an attorney at Lowenstein & Weatherwax LLP in southern California, said the Fintiv decision “does seem to have persuaded several board panels to take the ITC case seriously.”

ITC investigations move quickly, generally aiming for completion within 16 months from the time a complaint is filed. That’s shorter than the time it typically takes the PTAB to review a patent. The ITC also doesn’t pause its investigations for PTAB review.

“Those two factors seem to have taken on a greater significance under Fintiv than they did before,” DiMarco said.

Since Fintiv, there have been a handful of disputes, including cases between and Neodron Ltd., where the board found an ITC proceeding wasn’t a reason to deny review. But decisions are trending in the direction of patent owners.

The board this month denied patent reviews requested by Regeneron, . and . Companies like and also have had petitions rejected.

Google last month asked for a rehearing after the PTAB denied its challenge to an EcoFactor Inc. patent, arguing recent decisions are “in tension with the vast weight of the board’s prior decisions.”

“If the POP intends to make IPRs unavailable in cases involving parallel ITC investigations, then the public deserves a clear statement from the PTAB making this position clear and justifying this policy change in direct contravention of the statutory scheme for IPRs,” they wrote in a November filing.

The challenges for companies facing an ITC complaint are reminiscent of those for businesses that have been sued in the Western and Eastern Districts of Texas.

“If you get sued and you wait a couple months to file, you’re probably already behind the ITC or Texas schedule,” said Brenton R. Babcock, an attorney at Womble Bond Dickinson (US) LLP in California and one of the study’s authors.

The agency received 57 new Section 337 complaints, which include complaints about patent infringement, in 2020, an increase over the agency’s 10-year average of 49, according to an analysis by a Squire Patton Boggs attorney.

Given the PTAB’s trend of discretionary denials, “the ITC is probably becoming a more attractive venue than district court for some patent owners and we might see an increase in the number of ITC complaints being filed in the next few months,” DiMarco said.

Sotera promised that, if the PTAB instituted review of a Masimo patent, it wouldn’t pursue in district court the arguments made in the review—or any other argument that could have been raised. The PTAB said such broad stipulations weigh strongly in favor of review.

Attorneys said more companies might consider similar promises when there is a parallel ITC case, giving up certain arguments.

“If the petitioner issues a broad stipulation, and says they won’t go after any ground they could have brought in the IPR, that would be very significant,” Weatherwax said. “They would actually give something up.”