Litigation funding companies in the U.S. committed $2.8 billion toward new deals in 2021, an 11% increase from the prior year, thanks to rising interest from the world’s biggest law firms.

The country’s 200 largest law firms received 41% of the commitments from litigation funders in 2021, according to an annual survey released Wednesday by Westfleet Advisors, a litigation finance advisory firm. That’s a 46% increase from the prior year.

Taken together, the results showed there was not the dramatic surge in funding some in the industry expected to result from the pandemic even as Big Law firms seem more comfortable striking deals with third-party litigation financiers who earn slices of settlements or court awards in major civil litigation.

Some expected litigation finance to boom during the pandemic under the simple theory that more litigation occurs during a recession. Others anticipated pandemic-related lawsuits would flourish, though most business interruption insurance claims have been unsuccessful.

“There were lots of people predicting Covid was going to open the floodgates for litigation funding, like it would be a huge boom for the industry,” said Charles Agee, founder of Westfleet Advisors. “That didn’t happen. It seems like instead Covid didn’t affect the deployment pace in the industry much at all.”

The survey asked 47 U.S.-based funders to self-report data about how much money they managed and allocated last year. Respondents include those with funds raised specifically to invest in litigation finance, hedge funds that allocate some money toward funding lawsuits and other asset managers that make ad hoc investments in litigation.

The survey asked for some specifics about the funders’ deals, such as their size and the types of law firms involved.

Last year, Big Law accounted for 28% of the deployed capital in Westfleet’s survey. Agee said at the time that the figure cast doubt on the future growth of the industry. 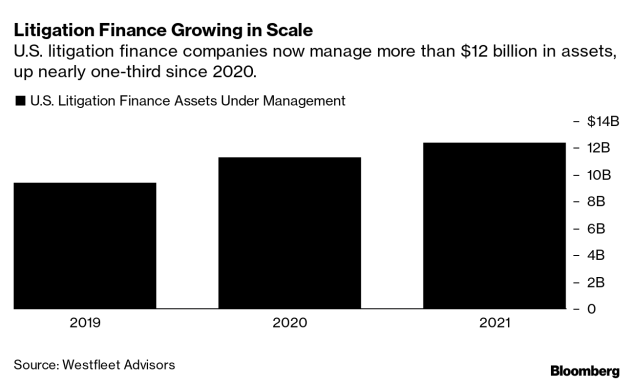 The rise in assets committed to deals involving Big Law mostly stemmed from a handful of “portfolio” deals, which give law firms access to a pool of money to back multiple lawsuits, Westfleet said. Most of those deals made cash available for patent lawsuits.

Last year, Willkie Farr & Gallagher announced a $50 million partnership with funding firm Longford Capital, the first major law firm to publicly state it was providing financing to clients. Burford Capital—a publicly traded litigation funder—has previously said it has struck portfolio deals worth as much as $100 million, though it has not named the law firms involved.

William Farrell Jr., a Longford co-founder, said the Willkie deal announcement led to more law firms calling about the possibility of portfolio funding. Longford’s work with Big Law firms has grown every year, according to Farrell.

“The demand for financing among those firms, for sure, has always increased year over year and it continues to do so,” Farrell said.

Westfleet’s Agee said the spike in commitments to Big Law was hard to interpret as “purely aberrational.”

“It seems like a pretty substantial trend and uptick in Big Law utilization of funding, especially on law firm portfolio deals,” Agee said.

While more money was spent overall, the average size of deals has declined by around 20% since 2020 to $6.5 million. The survey showed that new funds have popped up specializing in smaller deal sizes.

One example is Chicago-based Statera Capital, which launched three years ago. Statera aims to make investments in cases expecting judgments or settlements between $5 million and $30 million, according to co-founder Andrew Woltman.

He said it’s not economical for the largest funders in the industry to serve that market. They manage too much money to spend it on so many deals, which can be costly to research and close.

“That was the thesis,” Woltman, a former McGuireWoods partner, said. “There’s this large opportunity for smaller investments that is largely overlooked by the industry. And the trend in development in the U.S. is there are a lot more law firms coming online that have those smaller investment needs.”