EU commissioner for Trade Phil Hogan arrives for the inaugural meeting of the college of commissioners, on December 4, 2019 at the European commission headquarters in Brussels.
Photographer: Kenzo Tribouillard/AFP via Getty Images

The European Union’s new chief will be in Washington for the next three days trying to head off a transatlantic commercial war on several fronts. The prospects for success look slim.

is due to meet U.S. Trade Representative and other American officials during a Jan. 14-16 visit that follows a general fraying of ties in recent months between the world’s biggest economic partners.

While U.S. President has held back on a threat to hit European cars and auto parts with tariffs that are much dreaded in the EU, both sides have revived old disputes and triggered new ones as a result of fundamental disagreements over trade policy. 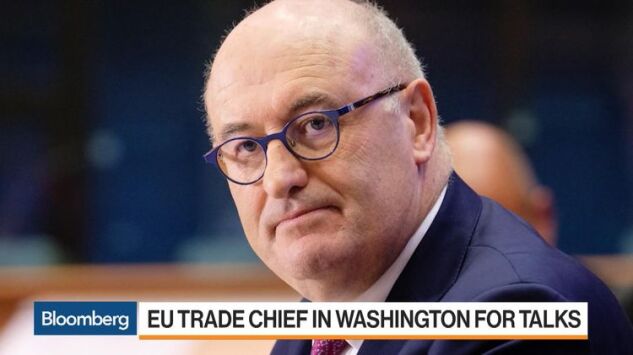 WATCH: EU trade chief Phil Hogan will be in Washington seeking to smooth tensions with the Trump administration.
(Source: Bloomberg)

A high-stakes security standoff between the West and adds to the complexity and gloom because Trump’s stance toward Tehran is much more hardline than Europe’s. This raises the possibility that the White House will use transatlantic commercial questions -- and the option of American tariffs -- as leverage against EU allies when it comes to Iran.

“The gloves are off,” said Hosuk Lee-Makiyama, director of the European Centre of International Political Economy in Brussels. “There is going to be a lot of fireworks before any underlying progress in resolving U.S.-EU policy differences over trade.”

Trump continues to unsettle three years after entering office with an “America First” agenda that has shaken the global order the U.S. was instrumental in building after World War II. The EU has gone from being perplexed to steeling itself for more disruptions as it fights to uphold multilateralism, a defining principle for the bloc.

The U.S.-EU tensions so far have played out largely in the shadow of a trade war that Trump instigated against with far bigger economic ramifications. Now the U.S. and China plan to de-escalate their battle during Hogan’s visit by signing a first-phase agreement on Wednesday in Washington.

“It just feels like we are now entering what I call the transatlantic trade and tariff tantrum,” said , a former U.S. diplomat now at the Center for Strategic and International Studies in Washington. “This is going to be a pretty intense period, I fear.”

The troubles started in 2018 when the Trump administration invoked national-security considerations to impose tariffs on steel and aluminum from Europe. As a U.S. military ally, the EU was infuriated and promptly with levies on U.S. goods including iconic brands such as Harley-Davidson Inc. motorcycles and Levi Strauss & Co. jeans.

A subsequent U.S. threat to wreak significantly more economic damage by targeting the European auto industry with duties on the same security grounds led to a hastily agreed truce and a pledge by both sides to work toward reducing industrial tariffs across the board.

Since then, the Trump administration has refused to start the tariff-cutting negotiations unless Europe includes in them. Also, it imposed levies on EU products in retaliation over government aid to that was by the World Trade Organization, and disabled the WTO’s ,

The EU is pressing ahead with a plan for tit-for-tat tariffs against the U.S. in a parallel WTO case over unlawful subsidies to The bloc is also advocating a stopgap global arbitration system and expanding the European trade-policy arsenal to allow for sanctions against countries that illegally restrict commerce and simultaneously block the WTO’s dispute-settlement process.

The latest flashpoint is a U.S. plan to apply duties on $2.4 billion of French goods ranging from cheeses to handbags in retaliation over a digital-services tax in that the Trump administration alleges discriminates against American technology companies such as Google, Apple Inc. and Amazon.com Inc.

Such duties would mark the first time the Trump administration deploys against Europe a policy tool -- Section 301 of a 1974 American law -- reserved so far for the U.S. trade war against China.

The EU is pleading for more time to reach an international accord on the taxation of digital businesses through the . The bloc is also vowing a unified response should the U.S. trigger the levies against France.

“I think we have a bumpy ride ahead of us,” , director general for trade in the European Commission, the EU’s executive arm, told a Brussels conference last month. “If you deal with partners who link up trade policy with security and with industrial policy, et cetera, well, you have to up your game as well. That will be the challenge for this commission.”

Weyand is the chief civil servant for international commerce under Hogan, an Irish politician who became European trade commissioner on Dec. 1 as part of a new EU commission led by President .

Hogan, who has a reputation as a dealmaker, burnished those credentials in mid-2019 while in his previous job as EU farm chief. He reached an with Lighthizer to give American farmers more access to the European beef market after persuading Australia, Argentina and Uruguay to cede chunks of an EU import quota.

Still, in the eyes of some officials in Washington, Hogan got off to a bad start with regard to the European trade-commissioner post by telling Irish radio on the day of his nomination in September that Trump was “reckless” and needed to see the “error of his ways.” The comments prompted White House economic adviser to the EU ambassador to the U.S., according to officials familiar with the event.

Regardless of any political damage that Hogan caused with his blunt words or of his dealmaking skills, the main difficulty for him may simply be the size of the transatlantic gap in views about how trade policy should be pursued in an increasingly interconnected global economy.

The gulf would become even bigger were Trump to view U.S. trade ties with Europe through the prism of his “maximum pressure” Iran strategy, which has included abandoning a landmark international accord to control the Iranian nuclear program. Europe has fought to keep the deal alive.

Treasury Secretary last week stepped up U.S. calls on the EU to abandon a payment system meant to shield European trade with Iran from American sanctions, repeating a threat of penalties against bodies in Europe should any transactions take place.

“There is very little that Hogan can actually put on the table to sway Lighthizer,” Lee-Makiyama said. “That leaves the EU facing domestic political pressure for more trade retaliation, which in turn is economically counterproductive.”

To contact the reporters on this story:
in Brussels at jstearns2@bloomberg.net;
in Washington at sdonnan@bloomberg.net