The Mansfield Rule is driving positive culture and structure changes to boost diversity in law firm and corporate legal department leadership. It is making progress where the NFL’s Rooney Rule has not for three reasons.

Mansfield is built on decades of science and data. Transparency and accountability are baked into the structured certification process, with the requirements evolving and getting tougher every year. And, unlike the stagnating Rooney Rule, it’s not focused simply on hiring, or one or two top roles.

The goal of Mansfield is to diversify the entire power structure by broadening who is considered—through appointments, elections, promotions, and other critical activities that impact the pipeline—for dozens of influential leadership committees and roles. Law firms and legal departments that adhere to the rigorous annual certification process and report their verified data to Diversity Lab are awarded certification. And to drive long-term results, there is also a “certification plus” category that evaluates whether they have achieved diversity in leadership, and not only considered it.

The 30+ early adopter law firms—those that have achieved certification year-over-year since the rule’s launch in 2017—have made progress above and beyond the typical rate of change pre-Mansfield. In several instances, Mansfield firms have significantly increased the racial and ethnic diversity of their leadership and outpaced non-Mansfield firms’ progress. 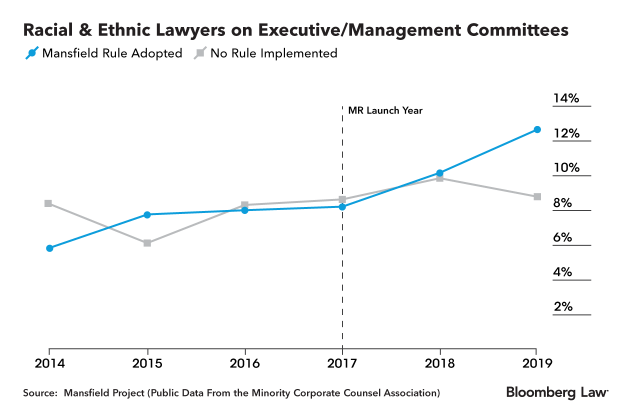 Even more important are the participating firms’ individual outcomes. Prior to Mansfield, only 12% tracked the diversity of their leadership pipeline; now 100% do so. This allows firms to focus on who is in the pipeline now and in the future, and to document and measure progress. This unsung but critically vital work is the first of many steps required for more inclusive leadership.

Participating in Mansfield is much more than an exercise in ticking the box. And the benefits are broader than current leadership. The commitment to re-certifying annually keeps firms from backsliding when new management takes over. 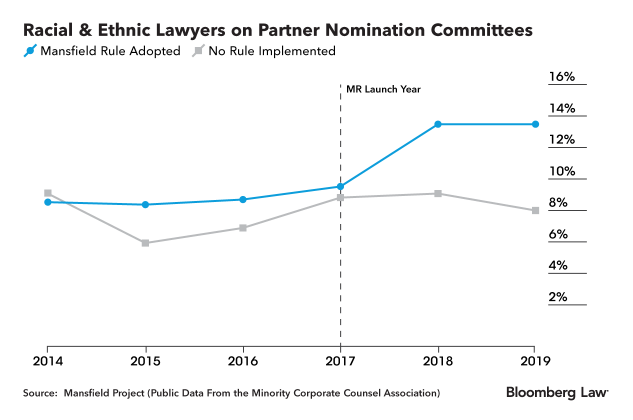 Mansfield also supports up-and-coming leaders. At the annual Mansfield Client Forums, more than 2,000 newly promoted diverse partners at certified firms have had the opportunity to build relationships with influential in-house lawyers, resulting in about $3 million to $5 million in business credited to these partners.

In the last two years, over 200 firms and 100 legal departments have adopted Mansfield in hopes of certifying and experiencing similar results. The annual certification is tough and not all participants achieve it. The process includes the tracking and measuring of more than a dozen leadership-related talent practices and activities. The processes must be written and transparent to all lawyers. There are monthly knowledge-sharing calls among all participants. There are numerous data-collection and reporting milestones. And it changes every year to drive even greater change.

When the certification launched initially in 2017, participating firms were asked to consider 30% women and historically underrepresented racial and ethnic lawyers for all high-level leadership committees and roles. More recently, it was expanded to include LGBTQ+ lawyers and lawyers with disabilities for leadership roles as well as critical activities that impact the pipeline to leadership such as pitch teams, senior-level lateral hiring, and promotions to equity partner. A new version was also recently created and launched for legal departments that requires 50% consideration of all historically underrepresented lawyers for internal leadership and outside counsel roles.

Applying the Mansfield Rule is hard. It’s time consuming. But it’s working at its intended purpose to diversify leadership.

In law firms, power lies in the collective leadership structure. Firms are governed by influential committees—the management committee, partner-nominating committee, compensation committee, and more—as well as top roles, such as the managing partner and practice group leaders. Together, they determine who gets promoted to partner, how much lawyers are paid, and which partners get credit for new clients.

If the leadership teams are diverse, then the policies and processes related to hiring, promoting, and rewarding talent will be more inclusive and equitable. Management decisions will more fully reflect and represent the needs of diverse workforces. It takes time to change the entrenched leadership practices and structure, and benefit from the ripple effect in the broader workplace.

Reed Smith is one example. Since the inception of the Mansfield Rule, Reed Smith has achieved “Mansfield Certified Plus” status, which is awarded to firms that have not only considered, but reached at least 30 percent diversity in a notable number of current leadership roles and committees. The firm has reported material increases across four Mansfield metrics: diversity among department chairs and practice group leadership, diversity among office managing partners, diverse lateral recruitment, and diversity among lawyers who are on client pitch teams.

But it’s not just about the numbers, Mansfield is shifting conversations and cultures. Diverse representation has become a key consideration in every discussion when selecting leadership at Reed Smith. The outcomes speak volumes. A woman leads the firm’s transactional practices and a Black man heads the litigation and disputes department. Recently, the firm appointed two women to office managing partners, one of whom is Black—resulting in six women in these US leadership roles. There are also racial and gender diverse leaders in disputes, financial services, labor and employment, and life sciences.

Despite this initial progress, there are occasional naysayers who denounce Mansfield and the hard work of the firm and corporate leaders working to implement it. An academic recently published a paper suggesting that Mansfield is ineffective because the early-adopter firms are not light years ahead of all other firms in diversity representation or retention across all levels. Not only did the academic measure the wrong data—including areas not addressed by Mansfield and firms that did not certify consistently—she completely missed Mansfield’s premise and purpose.

Mansfield was not built to improve diversity across all levels overnight. It was built to diversify a narrow but incredibly important aspect of firms and legal departments—the leadership structure.

Premature and careless criticism of Mansfield for not having cured the diversity crisis in law in the few years since it was first launched does harm. It discourages the very innovation, experimentation, and long-term thinking that the crisis demands. And it discounts the lived experiences of the leaders and underrepresented lawyers who have benefited from the discipline and accountability provided by the Mansfield certification.

There is no magic wand that will fix the lack of diversity in leadership, but Mansfield is making progress in law.

Hundreds of diversity directors and other leaders are doing the hard work to implement and measure Mansfield’s impact. It is one tool in their larger toolkit to drive systemic change in leadership. But this novel, change-management initiative requires time, intentionality, and iteration. There is more work to be done by building on the early progress, not tearing it down.

John Iino is Reed Smith’s chief diversity officer, leading the firm’s efforts to sponsor and achieve diversity and inclusion in the legal community. He helps individuals and organizations achieve excellence through his experience as a global law firm leader, diversity professional, and executive coach.

Jim Sandman is distinguished lecturer at the University of Pennsylvania Carey Law School, president emeritus of the Legal Services Corp., former managing partner of Arnold & Porter, and an adviser to Diversity Lab.

Caren Ulrich Stacy is CEO of Diversity Lab. She is a 30-year veteran of law firm talent management, having served as the head of recruiting, development, and diversity for several top firms, including Arnold & Porter, Weil Gotshal, and Cooley. At Diversity Lab, she works with a team to create more inclusive and equitable workplaces.