The National Labor Relations Board’s new general counsel will reach back into history in an attempt to unleash the agency’s power to help organized labor overcome unlawful employer resistance to unions.

General Counsel Jennifer Abruzzo’s goals include potentially reviving the NLRB’s authority to order an employer to recognize and bargain with a union based on signed cards expressing majority worker support rather than an election, according to a memo the agency issued this month. The board stopped using that type of order in the late 1960s.

Abruzzo also indicated her interest in activating the NLRB’s ability to force an employer to pay workers as compensation for unlawfully refusing to bargain with their union. The board had considered that make-whole remedy 50 years ago, but never imposed it.

If Abruzzo can convince the NLRB to wield that power, it would mark the “most dramatic changes to labor law in the last 40 years,” said Matthew Bodie, a labor law professor at Saint Louis University and former NLRB lawyer.

While Abruzzo’s mandatory submission memo also included dozens of other priorities, the items on bargaining orders and make-whole remedies highlight her ambition to go beyond just challenging pro-employer precedent from the Trump era.

The memo instructs NLRB regional offices to send cases raising targeted issues to headquarters. Abruzzo’s powers as general counsel give her the final word on which cases to prosecute and which legal theories to argue before the board, including possible changes in precedent. 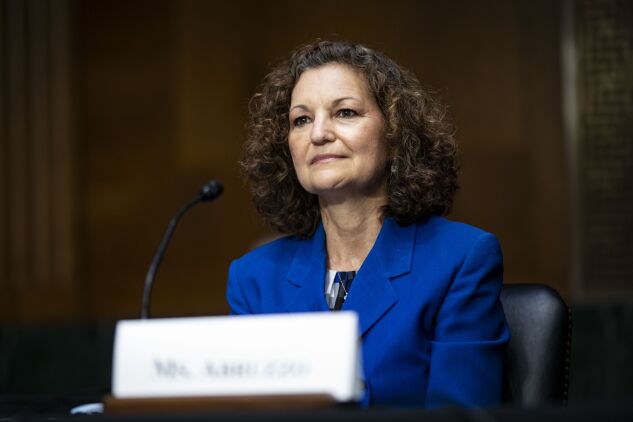 “By requiring employers to recognize and bargain when there is no good faith doubt of a union’s majority status and by providing a make whole remedy to workers who lost the opportunity to make gains in bargaining due to an employer’s refusal to bargain with their chosen representatives, unlawful stall tactics to erode union support and undermine employee choice and collective bargaining will hopefully come to an end,” she said.

“It’s part of the Biden administration’s overall strategy to increase union density,” King said. “There’s no question about that.”

“It merely refers to the union being designated or selected by a majority,” said Martin Malin, a former professor who co-directed the Institute for Law and the Workplace at Chicago-Kent College of Law. “That could include designated via authorization cards.”

Unionizing through signed worker authorization cards—known as card check—is expressly allowed for public employees in some states, including New York and Illinois. The Taft-Hartley Act’s amendments to federal labor law in 1947 effectively took away card check in the private sector, making elections the sole route for the NLRB to certify a union.

Nevertheless, the NLRB’s 1949 ruling in Joy Silk Mills ordered a thread manufacturer to bargain with a garment union that wasn’t certified through an election, but rather designated by authorization cards. The company had refused to negotiate with the union, insisted the union prove majority support through a vote, and committed unfair labor practices in the period before the ballots were cast, according to the board.

The company’s refusal to bargain was itself unlawful, as it was based on trying to gain more time to undermine the union’s support rather than any good faith doubt about majority support, the NLRB said.

The board had stopped issuing Joy Silk bargaining orders by the time the U.S. Supreme Court handed down its 1969 decision in NLRB v. Gissel Packing, which signed off on bargaining orders when an employer’s labor law violations destroy the possibility of a fair election. That decision didn’t overturn Joy Silk, but said the board had “virtually abandoned” it.

The revival of Joy Silk-style bargaining orders, according to Abruzzo’s apparent view of the issue, would be “terrible” for employers, said Jerry Hunter, a former NLRB general counsel during the George H.W. Bush administration.

Abruzzo’s memo seems to overread Joy Silk by suggesting an employer could be ordered to negotiate with a union based only on the lack of sufficient reason for doubting majority support, without separate violations of labor law, said Hunter, an attorney at management-side firm Bryan Cave Leighton Paisner LLP.

But the policy goal behind reviving the Joy Silk doctrine—which was approved in principle by nearly all circuit courts—isn’t creating a card-check-like path to unionizing without an election, said Brian Petruska, general counsel at the LIUNA Mid-Atlantic Regional Organizing Fund.

“Ultimately, the key result would be cleaner elections, elections that are less sullied by illegal conduct,” said Petruska, who wrote a 2017 law review article on Joy Silk.

An obvious way to discourage labor law violations during elections and other parts of the labor organizing process would be to strengthen the NLRB’s “laughably weak remedies,” said Joseph Slater, a University of Toledo labor law professor.

Under current law, the NLRB can order remedial rather than punitive remedies. So, if an employer gets caught illegally threatening workers for organizing, for example, the board might order them to stop and post notices informing workers of their rights.

As Senate Democrats are working on legislation to allow the NLRB to issue monetary fines, Abruzzo is eyeing a route to stronger remedies via the board’s remedial authority. She noted in her memo the NLRB’s Ex-Cell-O ruling from 1970, which contemplated requiring a company to pay workers for the wages and benefits they would have been entitled to if the company had agreed to a union contract rather than unlawfully refusing to bargain.

A divided NLRB rejected imposing that type of remedy. But in a separate 1970 case, the U.S. Court of Appeals for the District of Columbia Circuit endorsed the board’s power to do so.

“We reiterate,” the court said, “that damages can be awarded on an assessment of the contract terms that would have been in effect if the law had been complied with even though the law-violating employer has not yet entered into the contract.”