Overall volume is up sharply over the same point last year, ECG principal Hector M. Torres said. There were 1,250 deals announced or closed through the end of October 2019, compared with 900 in 2018, he said. ECG created curated lists of select transactions in October and year-to-date for Bloomberg Law.

October had the most deals of any month in 2019 so far, with 186 transactions announced or closed, S. Lawrence Kocot, a principal at KPMG in Washington told Bloomberg Law. Each of the last four months had over 150 deals—a sustained increase over the first half of 2019, he said. 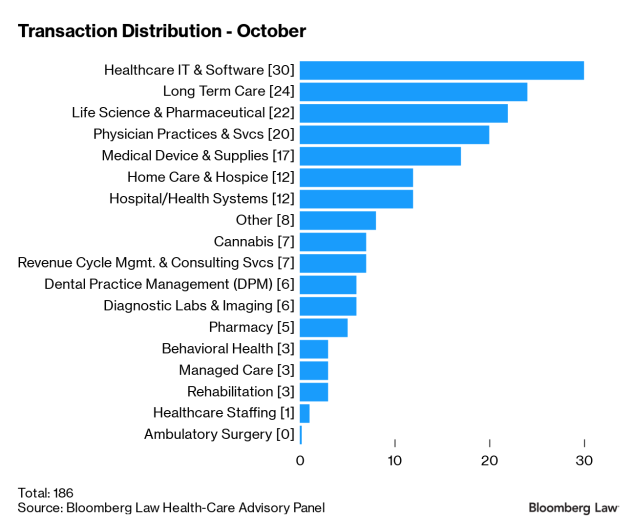 The long-term care, physician practice and service, health information technology, life sciences, and pharmaceutical sectors are all on pace to top their 2018 numbers, Kocot said. The hospital and health system sector, however, likely will end 2019 with fewer deals than in 2018, he said.

TriHealth Unified Health System said it will buy seven of those clinics in the Cincinnati, Ohio, area, Gary W. Herschman, a member of Epstein Becker Green in Newark, N.J., told Bloomberg Law. This deal probably will “be replicated elsewhere, as hospitals implement or expand retail clinic access points in their communities,” Herschman said.

Private equity platforms have been active in other parts of the physician practice and services sector, ECG senior manager Aaron T. Newman told Bloomberg Law. Centre Partners, Shore Capital Partners, and Harvest Partners participated in some of the 25 transactions announced or closed in this sector in October, he said. 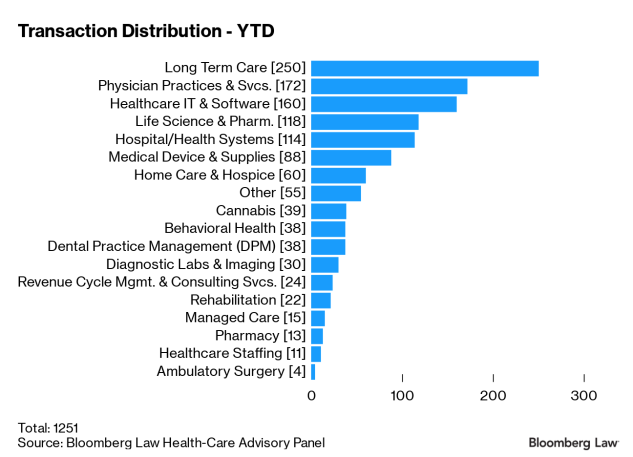 North American Dental Group was acquired by Colosseum Dental for $660 million, according to ECG.

There have been 250 long-term care sector deals in 2019 so far, up from about 190 at this point last year, ECG’s Christopher McGuine told Bloomberg Law.

But the health information technology sector beat the long-term care sector volume-wise in October, with 30 announced or closed deals. Amazon.com’s purchase of Health Navigator led the way. The digital diagnostic system will be part of Amazon Care, the company’s new employee health-care system, the company said.

Consolidation continues in the hospital and health system sector, though there were only 12 transactions in October, ECG’s Nicholas B. Davis told Bloomberg Law.

Deal volume in the home health sector is thriving, mostly due to the aging baby boomer generation and longer life expectancies, Patel said. The emerging cannabis industry also should see more growth through the end of 2019 because of robust state legalization efforts, Herschman said.
_________