An experimental vaccine from the U.S. biotechnology company showed signs that it can create an immune-system response to fend off the new coronavirus, offering tentative hopes in the global effort to combat the pandemic.

The results are just a sample from the small, first study designed to look at the safety of the shot in human volunteers, and should be viewed with caution. But they showed no major safety worries, a key first hurdle since a vaccine would be given to millions of otherwise healthy people. 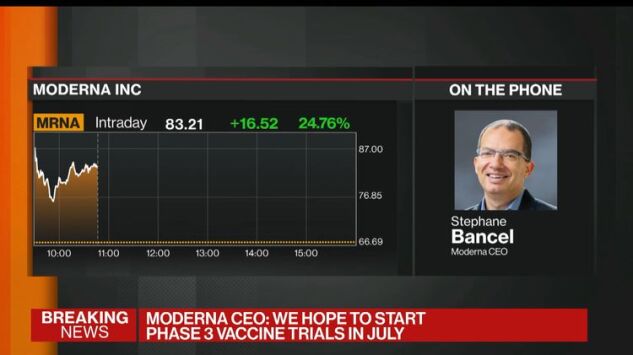 “This is a very good sign that we make an antibody that can stop the virus from replicating,” Moderna Chief Executive Officer said in an interview. The data “couldn’t have been better,” he said. The company is moving ahead with plans for a larger test to pick a dose of the vaccine and further study its effectiveness, as well as a phase 3 test with many thousands of patients.

A vaccine is considered a crucial step toward lifting social-distancing measures and safely reopening economies, schools and events around the globe. The new coronavirus, known as SARS-CoV-2, has infected more than 4.7 million people and killed over 300,000, spurring a global race by drugmakers, academic institutions and governments to find a vaccine.

Moderna shares surged as much as 30% in New York, hitting an all-time intraday high of $87. Broader markets , with the S&P 500 gaining 3.1% as the confident tone on vaccine candidates from Moderna, the University of Oxford and China added to confidence that scientists have the tools to stop the virus. Vaccine and drug makers working on the pandemic have said little about how or if they’ll make money on their products.

The vaccine trials are being conducted in stages, with the first test designed only to look at safety and whether or not the shot created lab markers of an immune-system response. Only in later stages of testing, to be conducted in thousands of patients starting in July, will the vaccine go up against the virus in the real world in a definitive test of whether it prevents or lessens infections.

In the phase 1 test, the researchers looked at blood samples from the test subjects and whether the vaccine helped them generate antibodies that could theoretically fight off an infection. The researchers found that at two lower dose levels used in the study, levels of antibodies found after getting a second booster shot of the vaccine either equaled or exceeded the levels of antibodies found in patients who had recovered from the virus.

Bancel said that safety profile appeared to be good, and the reactions were typical of vaccines. Three patients who got a high dose of the vaccine had more severe side effects, according to a company presentation. That dose won’t be used in later trials. One person with more severe side effects got a middle dose, and had redness around the injection site, the company said.

Side effects seen in the trial included fatigue, fever, muscle pains and headache. All of the symptoms resolved within a day, a Moderna executive said on a conference call Monday. 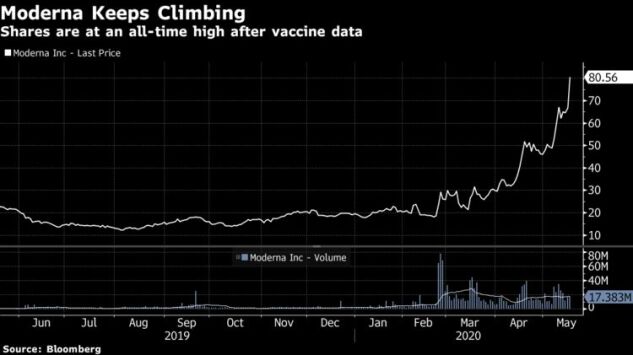 The phase 2 trial, with 600 patients, will begin shortly, according to the company. Bancel said the company felt it needed to release the interim data from the early trial because of the high level of interest in the vaccine.

Researchers studied blood samples from the test subjects to determine whether the vaccine helped them generate antibodies that could bind to the virus and ones that can fight off an infection. They looked at both the quantity of coronavirus antibodies produced, and in a smaller subset of people, whether those antibodies were sufficient to prevent the virus from infecting cells in test tube experiments.

The second test, evaluating the quality of those antibodies, was only available for eight of the people because it takes longer to perform. But in all eight people, the vaccine successfully stimulated the body to create antibodies capable of neutralizing the virus in the test tube, so it can no longer infect cells.

Most vaccines either consist of inactive pieces of a virus or proteins from a virus made through genetic engineering. When injected into the body, they trigger a lasting immune response similar to that of a person who has been infected and recovered.

By contrast, the mRNA technology being used by Moderna and several others relies on the body’s own cells to produce viral proteins. Once injected into the body, the RNA slips into human cells and tells them to make virus-like proteins, in this case the “spike” protein on the surface of the coronavirus. If the vaccine works, those proteins then trigger the body to generate protective antibodies.

While the technology is new and hasn’t been used in an approved vaccine before, it allows researchers to move fast into trials. Moderna started working on its Covid-19 vaccine as soon as Chinese scientists put out the gene sequence for the virus in January. By late February, Moderna’s scientists had already delivered the first batch of candidate vaccines to researchers at the U.S. National Institutes of Health. In mid-March, the first healthy volunteer received a dose in the government-sponsored safety trial.

Former GlaxoSmithKline Plc executive , who is set to become the chief scientist for Operation Warp Speed, the White House effort to turbocharge vaccine development, has been a board member at Moderna since 2017. According to a person familiar with the matter, he will leave that and other board seats once he starts the position.

(Updates with other vaccine efforts in the fifth paragraph)