U.S. officials expect to have enough ventilators to care for Covid-19 patients and possible “second waves” of the virus after the government receives about 130,000 of the machines by the end of October.

The Department of Health and Human Services awarded contracts to 10 companies—including General Motors Co., Ford Motor Co., and Hamilton Medical Inc.—to make about 200,000 ventilators, but later chose to terminate three and scale back the initial order.

The changes reflect a better understanding of how to treat the respiratory disease and the increased variety in treatments since the beginning of the pandemic. Hospitals initially struggled to treat waves of sick people, and they used ventilators because it was the most logical option to assist breathing. Over 180,000 people have died of the virus in the U.S., and now doctors delay putting patients on ventilators for as long as possible.

Even with the lower inventory, the Strategic National Stockpile likely has enough ventilators to meet any need from future spikes in cases, said Rich Branson, professor at the University of Cincinnati College of Medicine Division of Trauma and Critical Care.

“Assuming we’re able to move ventilators around the country as Covid-19 hot spots pop up, we do have enough,” said Megan Ranney, co-founder of Get Us PPE, an organization that provides personal protective equipment to communities in need at no cost. Even if there is a massive second wave of cases in the winter, she said she feels “more confident in the production of ventilators.”

An HHS spokesperson said the stockpile is currently well-equipped with ventilators, and the forthcoming additions will ensure there is enough for any Covid-19 surges or other public health emergencies.

Officials learned as the pandemic went on that they didn’t need as many ventilators as they initially thought, said Branson, deputy editor of the American Association for Respiratory Care.

Ventilators vary in their uses and efficacy. Branson said it’s more important to provide hospitals with options to give patients the best care than to rely on raw counts in the medical stockpile.

Ventilators made by Hamilton Medical, Royal Philips NV, Ventec Life Systems/General Motors, and Vyaire Medical work best for the sickest patients, he said. They give doctors the most control over how much oxygen patients are getting and allow them to adjust the levels at smaller intervals. The stockpile is set to have about 50,000 of this type.

The government received most of the ventilators it now expects, about 120,000, according to the HHS spokesperson.

Ford, General Electric, General Motors, Hillrom, Philips, and ResMed confirmed to Bloomberg that they have completed delivery of their contracted ventilator orders to the Strategic National Stockpile. Other manufacturers’ orders are still in process. 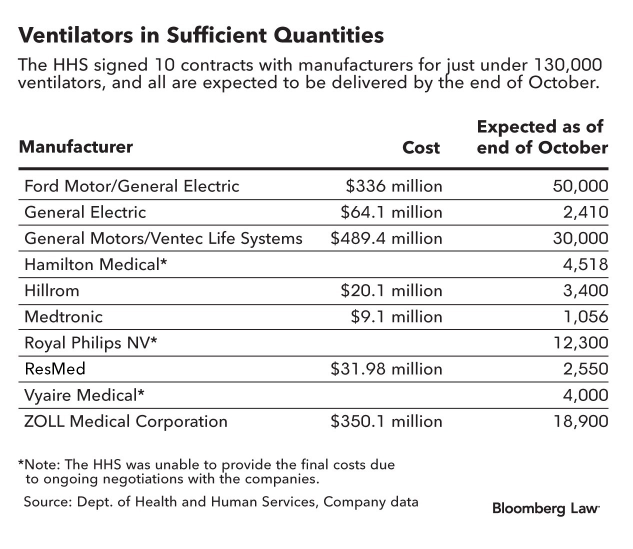 Ventilators are a last resort to help patients breathe. The machine pushes air into a patient’s lungs, either through a mask or a tube in the nose, mouth, or windpipe. Clinicians regularly adjust the amount of oxygen patients receive. Some ventilators can also tailor oxygen levels automatically through pressure measures.

Covid-19 symptoms are “textbook” signs to use a ventilator, Branson said. But as researchers have learned more about the virus since the initial outbreaks in March and April, doctors are diagnosing patients earlier and are able to provide smarter care. For example, steroids prove effective in some patients in assisting breathing and are far less invasive than ventilators.

Early data showed that 80% of Covid-19 patients on ventilators died, Branson said, which is about twice the typical rate. Lack of knowledge about the virus and crisis conditions contributed to the higher mortality rate.

At the height of the crisis in New York City, one respiratory therapist would care for as many as 60 patients on ventilators, rather than the typical six to eight. Those doctors would go hours without seeing patients, and “that’s not conducive to good critical care. Those are crisis standards,” Branson said.

Ranney, an emergency physician at Brown University, said doctors now delay intubating Covid-19 patients for as long as possible because it is “often an irreversible condition.”

Early in the pandemic, Columbia University and Johns Hopkins University predicted the U.S. would need 200,000 to 300,000 ventilators. Branson said physicians and researchers later realized the concurrent need for ventilators
was less than originally thought because the disease shows up in “isolated pockets” and the severity varies.

The new ventilators in the stockpile are “immediately available for deployment to jurisdictions that request federal assistance with supplies,” the HHS spokesperson said. Of the 13,000 distributed since the beginning of the pandemic, about 2,300 new acquisitions went to Arizona, California, Illinois, Indiana, Montana, Nebraska, Texas, and American Samoa.

Ventec Chief Strategy Officer Chris Brooks said ventilators that came from his company’s partnership with General Motors were among those 2,300. Some went directly to health-care facilities in Chicago and Indiana at the request of stockpile officials, he said.

Branson said the 4,000 ventilators sent to New York and New Jersey likely ended the shortage when the virus was at its worst there.

The HHS partially terminated its contracts with Philips, Hamilton, and Vyaire because the stockpile had enough ventilators to meet the maximum national capacity in a crisis, the HHS spokesperson said.

Philips has delivered 12,300 ventilators and won’t complete the rest of the order for 43,000, the company said. Vyaire will deliver about 4,000 ventilators, down from the initial order of 22,000, and Hamilton will make 4,518 instead of the initial purchase of 25,574, the HHS spokesperson said.

ZOLL Medical Corp. delivered “thousands of ventilators” and “met all of its commitments to date,” spokesperson Diane Egan said in a statement.

Medtronic PLC delivered “some ventilators” and expects to deliver its entire order by the end of October, spokesperson John Jordan said in a statement.

Most of the contracts initially had delivery deadlines in June and July. Some received extensions, adjusted to accommodate the “global market strain for consumables and parts, ” the HHS spokesperson said.

Vyaire is expected to complete its delivery by Sept. 13, and Hamilton will deliver its order by Sept. 30, according to the HHS.

—With assistance from Ryan Beene, Michelle Cortez, and Keith Naughton