President delivered a pair of personal and political gestures this week that seized on his core voters’ mistrust of international institutions and skepticism of science, heightened amid the coronavirus pandemic.

Late Monday, the president threatened to withdraw from the World Health Organization, escalating his accusation it’s beholden to China. The move came hours after he revealed he was taking an anti-malaria drug, hydroxychloroquine, to protect himself from coronavirus -- an unproven therapy the president has promoted despite outcry from the medical community.

While Trump said he’s taking the drug out of concern he may be exposed to people infected by the virus in his job, both gestures were in line with sentiment among Republicans. As the pandemic ravages the economy, the president has increasingly resorted to brazen appeals to the slice of voters who represent his most avid supporters. 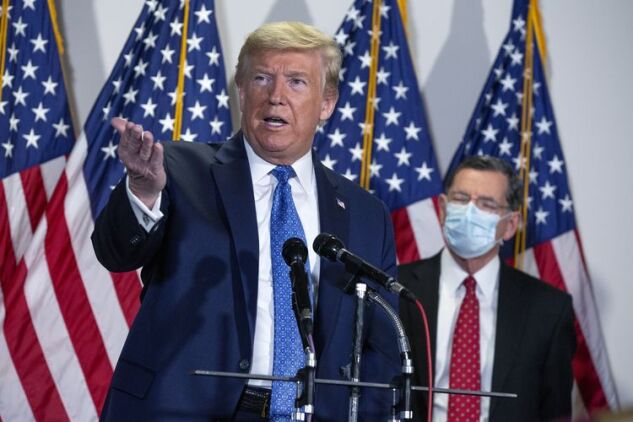 Donald Trump speaks to members of the media following the weekly Senate Republican caucus luncheon in Washington, D.C., on May 19.
Photographer: Stefani Reynolds/Bloomberg

He has sought to define his presidency not by his handling of the U.S. coronavirus outbreak, which surpassed 1.5 million cases on Tuesday, but in comparison with familiar right-wing bogeymen including China, and even Trump’s own public health advisers, who pushed tough stay-at-home measures despite the risk of an economic slowdown.

As is common with the Trump White House, his remarks have echoed weeks of commentary in right-wing media.

In recent days, Trump has bristled openly as his team urged caution with the nation’s reopening over fears the virus could reemerge. The president has instead spurred governors and school administrators to hasten their efforts. And he’s long voiced concern that the cautious bureaucracy of government scientists were drowning out anecdotal evidence on hydroxychloroquine that could give Americans hope of a return to normalcy.

“Hydroxychloroquine is used by thousands and thousands of frontline workers, so that hopefully they don’t catch this horrible disease or whatever you want to call it,” he told reporters at a cabinet meeting on Tuesday.

His letter to the WHO on Monday laid out a bill of grievances against the UN agency, which he has threatened to cut off from U.S. funding, accusing it of being too close to China. The letter’s first charge, however, was erroneous: that the WHO had ignored reports of the coronavirus spreading in Wuhan, China in December 2019 or earlier, including by The Lancet, a prestigious medical journal.

The Lancet issued a statement Tuesday saying it didn’t publish its first reports on the novel coronavirus until January 24. The journal chastised Trump, saying his allegations “are serious and damaging to efforts to strengthen international cooperation to control this pandemic.”

The danger for Trump is that his pronouncements risk evoking an air of desperation. Surveys show Americans growing less confident in his leadership as the nation’s death toll from the virus marches past 90,000, unemployment figures skyrocket from the economic collapse precipitated by the outbreak and the virus intrudes even into the halls of the White House.

The president has shown increasing hostility to science, threatening to solidify perceptions that he’s too impatient or politically motivated to steer the nation through a generational crisis, exacerbating the risk he’ll be held personally responsible if a second wave of the virus emerges.

To be sure, the country has become increasingly divided by the pandemic. Many Trump supporters openly question the severity of the virus and recommendations to wear face coverings. Opponents say a hasty return disregards science and will result in avoidable death.

With his announcement that he’s taking hydroxychloroquine, Trump has taken his skeptical approach to science to a new level. A bevy of doctors and scientists have warned there is scant evidence that the drug is effective against coronavirus, while noting that it carries the risk of serious health complications. 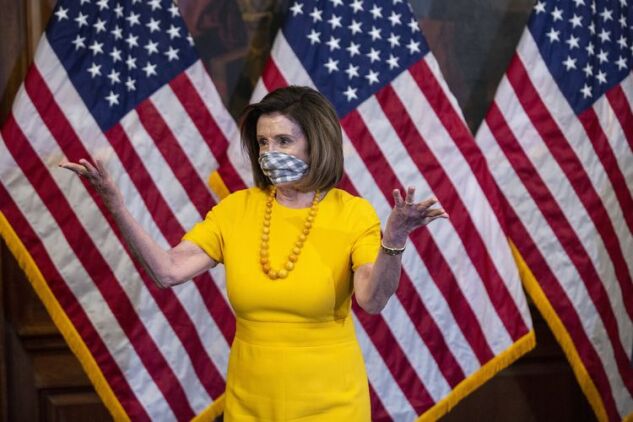 Nancy Pelosi gestures at the U.S. Capitol in Washington, D.C., on May 19.
Photographer: Stefani Reynolds/Bloomberg

The Food and Drug Administration on April 24 cautioned against the use of hydroxychloroquine or chloroquine for Covid-19, the illness caused by the coronavirus, outside of a hospital setting or clinical trial, citing a risk of heart rhythm problems. House Speaker seized on that possibility in a sharp criticism leveled during a CNN interview Monday night.

“As far as the president is concerned, he’s our president and I would rather he not be taking something that has not been approved by the scientists, especially in his age group and in his, shall we say, weight group -- morbidly obese, they say,” Pelosi said. “So, I think it’s not a good idea.”

, the nation’s leading infectious disease control effort, said last week that a large, randomized clinical trial would be necessary to determine if the treatment was safe.

But Trump defended his decision. “I’ve had no impact from it. I feel the same,” he told reporters at the White House on Tuesday, calling the medicine an “extra line of defense.”

He called Pelosi “a waste of time” and said she has “mental problems.” Trump’s physician, , issued a letter on Monday saying he had discussed hydroxychloroquine with the president and “we concluded the potential benefit from treatment outweighed the relative risks.”

The president also downplayed -- and politicized -- the results of a study of Veterans Health Administration patients that showed the medication had no health benefit in combating coronavirus and was linked to higher death rates. Asked about the study, the president said Monday individuals at the government agency “aren’t big Trump fans” because of reforms his administration had made.

On Tuesday, Trump called the study “phony.” Veterans Affairs Secretary Robert Wilkie disavowed it during a cabinet meeting with Trump, saying “that was not a VA study” and noting it was not peer-reviewed.

The notion that hydroxychloroquine has become a partisan litmus test is supported by polling data. In a Morning Consult poll conducted earlier this spring, 52% of Republicans supported using the antimalarial drug to treat coronavirus, while just 14% opposed the treatment. By contrast, 56% of Democrats opposed its use, with only 13% supporting the experimentation Trump is now personally undertaking.

Efforts to assign blame for the origins of the virus have become similarly partisan, and the president’s announcement Monday that he was considering fully withdrawing from the WHO suggests he sees a political advantage in cementing those divisions.

The WHO earned the president’s ire early during the pandemic when it recommended against travel and trade restrictions even as Trump moved to block entry to the U.S. from China. Democrats echoed the health agency’s concerns that such measures could contribute to discrimination against Asian Americans and cause economic harm.

The early travel restriction has become the linchpin of the White House’s argument that Trump was quick to combat the coronavirus, as opponents say the administration bungled virus testing and downplayed the severity of the crisis as infections spread.

On Monday night, Trump threatened to leave the organization altogether.

Opinions of the WHO are similarly split along party lines. In the same Morning Consult poll, three-quarters of Democrats approved of the WHO’s handling of the crisis, while 14% disapproved. Among Republicans, 47% disapproved and 37% approved.

And as with the WHO threat, Trump hinted at his broader considerations on Monday, when asked about his decision to take hydroxychloroquine despite the risks.

“You know what?” Trump said. “ I want the people of this nation to feel good.”