President said he instructed his administration to temporarily halt funding to the World Health Organization for taking China’s claims about the coronavirus “at face value” and failing to share information about the pandemic as it spread.

“The WHO failed in its basic duty and must be held accountable,” Trump said Tuesday at a White House press conference. “The outbreak could have been contained at its source” if the organization had correctly responded early on, he added.

It’s unclear when any halt in payments would take effect or how much authority Trump has to suspend disbursements, which are authorized by Congress. The U.S. has contributed $893 million to the WHO’s operations during its current two-year funding cycle, according to the organization. Administration officials signaled the suspension would be for 60 days. 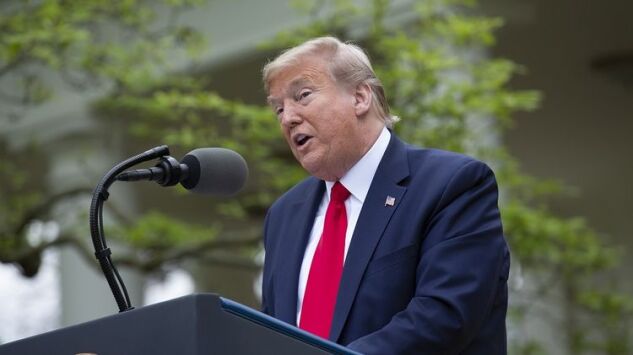 In a statement Tuesday, UN Secretary General said the chance to investigate how the disease spread around the world would come later.

“As it is not that time, it also not the time to reduce the resources for the operations of the World Health Organization or any other humanitarian organization in the fight against the virus,” he said. “As I have said before, now is the time for unity and for the international community to work together in solidarity to stop this virus and its shattering consequences.” 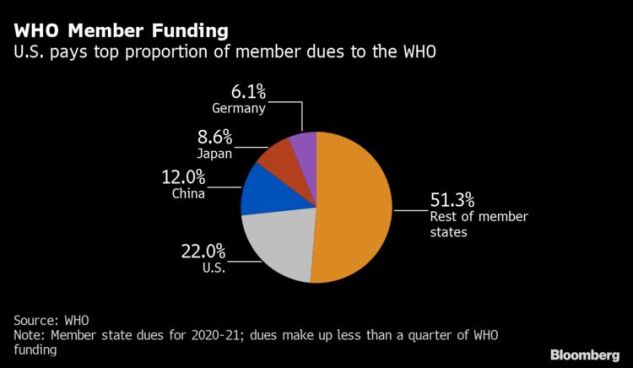 The move to limit support to the WHO in the midst of a global pandemic is unprecedented. Yet as domestic criticism of the Trump administration’s response has increased and the U.S. became the epicenter of the outbreak, many of the president’s supporters have pointed to the WHO for making early mistakes they say undermined the U.S. and worsened the crisis.

The WHO has been a conduit for tension between the U.S. and China for months, with WHO Secretary-General being singled out for blame by allies of the president for being too deferential to Beijing. Representatives for the WHO didn’t respond to requests for comment.

Billionaire philanthropist Bill Gates, the co-founder of Microsoft Corp., warned in a tweet that cutting off funds for the WHO “is as dangerous as it sounds.”

The U.S. contributes nearly a quarter of all member state dues for the WHO. That pool of funds — although a small proportion of the overall budget — are used as the organization’s operating budget to run daily operations, said Adam Kamradt-Scott, an associate professor of international security at the University of Sydney who has written about the politics of pandemic preparedness. The rest of the funding, called voluntary contributions, come from member states and non-profits and are tailored to specific global health programs.

He warned that Trump could “bankrupt the organization” if the U.S. pulls both member dues and voluntary contributions, adding that the move would undo decades of working leading the world in fighting diseases. The move could impact global health more broadly beyond the WHO, he added.

“We now have a situation in which the U.S. is vacating a leadership role in the middle of the crisis,” Kamradt-Scott said. “Nature abhors a vacuum. Politics abhors a vacuum even more.”

Early on after the news of the virus broke, the U.S. had pushed to have its own experts included in a WHO-led delegation to China. The health group repeatedly praised the Chinese response to the crisis, and later drew questions about whether it acted too slowly in declaring a pandemic.

Trump on Tuesday pointed to a WHO statement in late January opposing travel bans as a response to the coronavirus outbreak. The president instituted travel restrictions on China in late January, later extending it to the European Union and U.K. Around the same time, he also praised China’s “efforts and transparency” in a tweet.

“One of the most dangerous and costly decisions from the WHO was its disastrous decision to oppose travel restrictions from China and other nations,” Trump said on Tuesday. “Had other nations likewise suspended travel from China, countless more lives would have been saved.”

One person who reached out to Trump ahead of his announcement was the United Nations secretary-general. Guterres, through the U.S. envoy to the UN, acknowledged WHO missteps in the pandemic, but argued that now is not the time to be pointing fingers.

Some aides to the president have argued that cuts to the WHO now could be counterproductive because it is one of the few agencies with access to some of the world’s most vulnerable populations in Yemen, Libya and Syria, which could all be hit hard by the virus, according to one person.

While Trump criticized WHO reliance on Chinese information in the early day of the crisis, he repeatedly praised China and its president, Xi Jinping, for its handling of the coronavirus outbreak in January and February. But he said Friday that the WHO is “very, very China-centric. China always seems to get the better of the argument, and I don’t like that.”

House Democrats denounced Trump’s decision to withhold congressionally appropriated funds from the WHO in the middle of a pandemic. They said that he lacks the legal authority to do so and, like his withholding of aid to Ukraine, it would be a violation of the law.

“In a desperate attempt to deflect blame, President Trump is threatening to violate the same spending laws that brought about his impeachment,” House Appropriations Committee spokesman Evan Hollander said in a statement. “The president does not have the unilateral authority to withhold the United States’ assessed contribution to the World Health Organization.”

“The World Health Organization leads and coordinates the fight against pandemics. It’s what they do,” Beyer wrote on Twitter. “You don’t stop firefighters from doing their jobs during a five-alarm fire.”

Trump is likely to get full support from Republicans in Congress. Several GOP lawmakers, such as Senators Martha McSally of Arizona and Rick Scott of Florida, have accused WHO of participating in alleged efforts by China to cover up or minimize the extent of the outbreak. Senator Lindsey Graham of South Carolina pledged to cut funding in the next appropriations bill.

(Updates with Bill Gates tweet, analyst voice from eighth paragraph. An earlier version corrected the fourth paragraph to attribute the comments to the UN secretary-general)

To contact the reporters on this story:
in Washington at jfabian6@bloomberg.net;
in Tokyo at ldu31@bloomberg.net