A Kansas judge recently entered the debate over the continued need for a state policy that restricts physician employment by corporations.

It has become a concern lately, as more corporations seek to enter the health-care industry. For example, retail stores wishing to open walk-in clinics staffed by medical professionals—such as those currently in Target and Wal-Mart stores—must carefully examine state laws, administrative rulings, and court decisions to determine if CPOM doctrine would bar the transaction or if the deal could be structured to avoid CPOM restrictions.

Out of Touch With Reality?

The doctrine’s critics say it’s out of touch with the reality of how medical care is delivered today. When the doctrine originated, doctors usually were sole practitioners and were concerned with maintaining their independence. Today, many doctors are employed by large physician practices or hospitals.

The doctrine’s viability, therefore, is questionable, “given the dramatic changes that have swept the healthcare industry since its inception,” Kansas Supreme Court Justice Caleb Stegall said in a Sept. 7 concurring opinion in a CPOM case.

Consolidations in the health-care industry, especially in hospitals and health systems, may have lessened the concerns that led states to adopt the doctrine, Francis J. Serbaroli, the author of a Bloomberg Law portfolio on the CPOM doctrine, told Bloomberg Law. Serbaroli is a shareholder at Greenberg Traurig in New York. 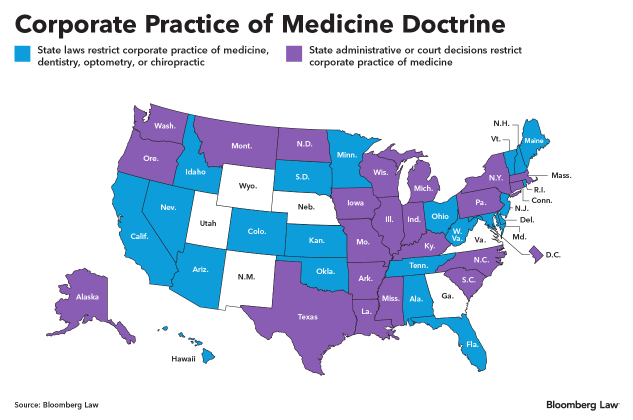 Serbaroli has “no problem with looking at the CPOM doctrine and seeing if it can be tweaked to accommodate the massive structural and financial changes that have taken place in health care.”

If the doctrine “presents an obstacle to better ways of providing better quality and more cost-effective care, then states should take a look at it,” he said.

There are, however, still good reasons to continue the CPOM policy, such as prohibiting doctors’ employers from placing improper financial pressures on them, Serbaroli said.

CPOM proponents are concerned that allowing big businesses to take over the practice of medicine will lead to a reduction in care quality, Michael F. Schaff told Bloomberg Law. Schaff is a corporate and health-care attorney with Wilentz Goldman & Spitzer, Woodbridge, N.J.

They worry that the clinical judgment of trained medical professionals might be compromised by nonlicensed parties looking to improve the business’s bottom line by putting pressure on providers to limit certain procedures or perform additional services, he said.

Hospital and health system attorney Mark A. Kadzielski told Bloomberg Law the decision probably shouldn’t be made by a court. Kadzielski, a partner at BakerHostetler in Los Angeles, said proposals to do away with the CPOM doctrine because it is antiquated or has been superseded should be reserved for state legislatures.

Kadzielski said the doctrine remains relevant in states where it is well-established and strictly enforced, like his home state of California, as well as New York and New Jersey. Other states, however, have multiple carve-outs or exemptions, while in others CPOM laws remain on the books but rarely are enforced, he said.

The underlying case involved a contract between Dr. Stanley Hatesohl and Central Kansas Medical Center. The medical center originally operated a hospital, but gave up its hospital license when it converted to an outpatient ambulatory surgical center (ASC). The resulting entity, St. Rose Ambulatory and Surgical Center, is licensed as an ASC.

Hatesohl went to work for a competing practice after his contract with St. Rose expired. When St. Rose sued him to enforce a noncompetition clause, Hatesohl argued the contract was void because it violated the CPOM doctrine.

The state supreme court agreed. Kansas recognizes a CPOM exception for hospitals and other licensed entities, but the exception applies only when the employed physician practices medicine within the scope of the entity’s license.

St. Rose’s ASC license authorized it to operate “primarily for the purpose of performing surgical procedures,” the court said. Hatesohl, however, was a family medical practitioner, and rarely performed surgery.

Kadzielski said the court reached the right result, but it was a “really state-based” result, he said.

Still, the decision provides lessons for health-care providers in other states, Kadzielski said. Entities that change their status, for example, should be certain they still are acting within the scope of their licenses, he said.

To contact the editor responsible for this story: at psturges@bloomberglaw.com