Thousands of unaccompanied migrant children have alleged that they were sexually assaulted while in the custody of the Department of Health and Human Services between fiscal year 2015 and fiscal year 2018, according to documents obtained by the House Judiciary Committee.

The documents, which were released by Rep. Ted Deutch (D-Fla.) during a committee hearing on the Trump administration’s family separation policy, describe an “environment of systemic sexual assault by staff on children,” Deutch said at the hearing.

Of the 1,303 allegations that were referred to the Department of Justice, 178 were made by children alleging that they were sexually assaulted by staff at HHS Office of Refugee Resettlement facilities. 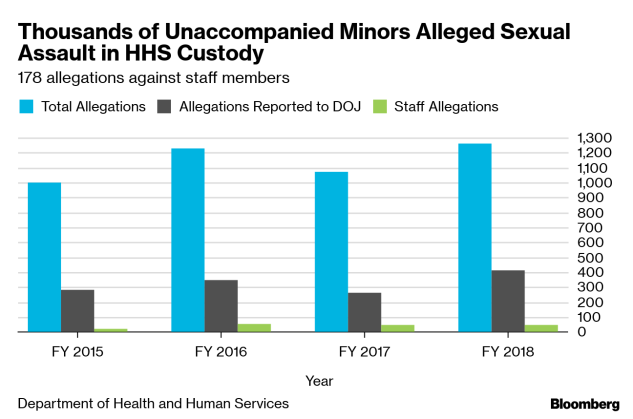 For every 1,000 unaccompanied migrant children in the custody of Customs and Border Protection while the family separation policy was in effect, 14 alleged they were sexually assaulted and had those allegations referred to the Justice Department, according to a Bloomberg Law analysis of HHS and CBP data.

Not only did the total number of unaccompanied minors apprehended by CBP go up from April to June of 2018, but the rate of allegations referred to the Justice Department did too. After the family separation policy was ended by a class action, the rate dropped to 4 allegations per 1,000 children.

The period with the next-highest rate of allegations—11 allegations per 1,000 children—was from January to March of 2017, when the Trump administration took office. 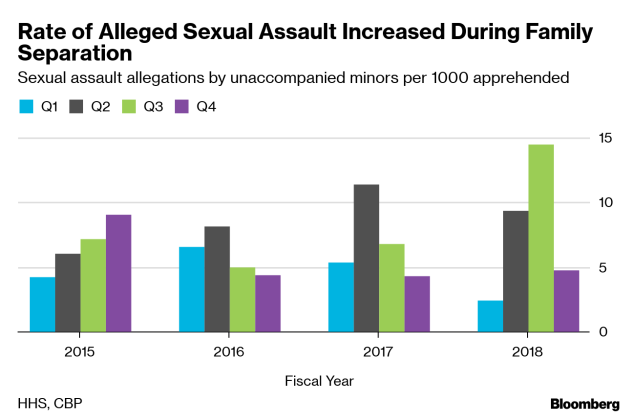 Jonathan White, who served as deputy director of the ORR from January 2017 until just before the “zero tolerance” policy was put into place, said ORR refers every allegation made by a child in their custody for investigation, and that the vast majority are determined to be unfounded by local and federal law officials.

The Trump administration’s April 2018 policy led to about 2,700 families being separated while awaiting decisions on their immigration status. A decades-old legal agreement prohibits children from being held in detention centers longer than about 20 days, so they were then put into the care of the HHS. A presidential executive order and class action last June ended the separations and demanded families be reunited.

White added he was not aware of a single allegation of assault against ORR federal staff.

“The safety of minors is our top concern when administering our unaccompanied alien children program,” HHS spokesperson Caitlin Oakley said in a statement.

“Each of our grantees running standard shelters is licensed by the respective state for child care services. In addition to other rigorous standards ... background checks of all facility employees are mandatory,” Oakley said.

“When any allegations of abuse, sexual abuse, or neglect are made, they are taken seriously and ORR acts swiftly to investigate and respond,” she said.

At least 24 staff members who were accused of sexual assault in FY 2015 and FY 2016 were terminated or resigned, according to incident details.