This spring, as overwhelmed doctors and nurses struggled to find protective gear while they treated Covid-19 patients, many Americans learned for the first time about a previously obscure government stash divided among secret warehouses across the country: the .

The stockpile was created in 1998 to hold drugs and vaccines in case of a biological or chemical threat to the U.S. Over time, it’s also added personal protective equipment—such as masks and gowns—as well as antibiotics, emergency medicines, and, recently, testing supplies like nasal swabs.

During the initial coronavirus surge, governors requested supplies from the federal stockpile—and later complained they were . Trump administration officials countered that the stockpile was never intended to be used for a . “The notion of the federal stockpile is it’s supposed to be our stockpile. It’s not supposed to be states’ stockpiles that they then use,” White House senior adviser said at an April 2 briefing. (Some states keep their own, smaller stockpiles.)

Months later, the Strategic National Stockpile doesn’t have enough supplies to meet the federal government’s own targets. But in the long run, health officials don’t want to make it bigger. Their goal before the next Covid-size disaster is to make stockpiling itself less central.

As of Dec. 4 the stockpile contained 164 million N95 masks, 201 million surgical and procedural masks, 84 million gowns and coveralls, 65 million gloves, and 23.5 million goggles and face shields, a spokesperson said in an email. (It also had about 152,000 ventilators ready to send out as of Dec. 7.)

In May the set a goal to buy for the stockpile by the end of 2020. (That was based on the highest Covid-19 usage rate.) The government has reached its goal for goggles and face shields. But as of Dec. 4 the stockpile had only 1% of the target number of gloves, 32% of gowns, 55% of N95s, and 50% of surgical and procedural masks, according to a Bloomberg analysis. (Gloves are the most difficult item to obtain right now, and gowns and surgical masks are made from the same material, which is in short supply.)

Industry and government medical professionals say the Strategic National Stockpile can be a powerful weapon in fighting public-health crises. Not only does it serve as a backstop for critical supplies, it can also help ensure that disadvantaged communities get what they need and can give a boost to domestic manufacturing, according to Megan Ranney, an emergency physician who teaches at Brown University.

But the stockpile must evolve toward embracing the modern-day logistics of supply and demand, says , HHS assistant secretary for preparedness and response. We can’t predict what the next bug or disaster will be, so the U.S. needs “a set of capabilities that give our country an advantage to be able to respond quickly,” he says. “That’s not a number of masks or boxes on a shelf. That’s something that requires a little more science and art put together to develop.”

For one thing, traditional stockpiling has logistical limits. If the national stockpile were to hold enough N95 masks for the 1918 influenza pandemic, adjusted for today’s population, it would have 3.5 billion, which would “fill up every warehouse in the U.S.,” says Greg Burel, who was director of the stockpile from 2007 to January 2020. 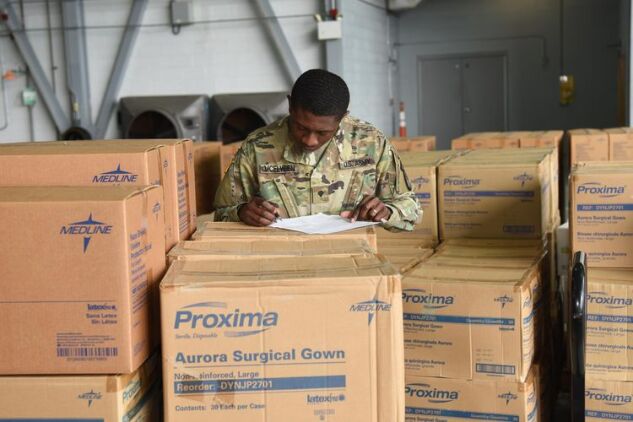 The future of the stockpile, Kadlec says, is about having “better visibility into the supply chain to know what’s out there and what is available, and how do we respond in a way that is timely and effective.” He says the federal government should enter into contracts with key distributors that it would pay to share information on their supply chain, manage some of the national stockpile’s supplies, and agree to assist in future emergencies.

For manufacturers, the government could pay them to build production lines and keep workers employed, and when there’s a crisis, it could activate a contract clause to shift production into high gear. This would be a smarter approach than spending billions of dollars to sock away supplies, Kadlec says.

The Biden administration could use a variety of to increase domestic production such as requiring the supplies purchased to be U.S.-made, providing tax credits to health organizations that buy their PPE domestically, and speeding up the regulatory approval processes for new manufacturers, says Brown University’s Ranney. Chaun Powell, a hospital supply-chain consultant, notes that the government shouldn’t necessarily invest in domestic production where there’s a safe global supply chain.

Representative , an Indiana Republican who co-authored a pandemic preparedness law passed by Congress last year, says the U.S. also needs a better system for getting data on how much PPE is required and where to better target stockpile supplies. Because many health-care facilities are overwhelmed by crisis response—and the data they’re already required to report—the government could consider incentivizing them to provide ongoing PPE data.

This year through October, HHS and the Department of Defense spent about $1.8 billion on PPE and $129 million on drugs for the stockpile. That came out of $16 billion appropriated by Congress in March. Regular funding for the national stockpile has remained steady at $500 million to $700 million annually since 2004, according to the Congressional Research Service.

But that’s as the stockpile has been tasked with preparing for additional threats such as emerging infectious diseases. It’s been tapped for “more and more,” says Burel, the stockpile’s former director. Even if it holds fewer supplies in the future, the manufacturing and data contracts that supplement it will require significant investment by the U.S. government.

More funding is critical, Burel says. “Our national health security is as vital to our national defense as buying tanks and planes.”—Shira Stein is a reporter for