A bartender wearing gloves cleans wine glasses at a restaurant in Houston, Texas, after coronavirus restrictions were lifted. Gov. Greg Abbott now says he may have to reverse course as Covid-19 cases increase in the state.
Photographer: Callaghan O'Hare/Bloomberg

Vice President told governors Monday that government health experts were worried that more young people are testing positive for the coronavirus around the country.

Pence’s comments, confirmed by someone who listened to the call, echoed concerns voiced by Texas Governor , who signaled he may halt or reverse the state’s economic reopening if the Covid-19 contagion continues to expand at what he called an “unacceptable rate.”

The mayor of Miami, Francis Suarez, meanwhile delayed the reopening of movie theaters, nightclubs and other large venues because of the spike in coronavirus cases. He and the mayors of neighboring cities in Florida’s Miami-Dade County also said they were mandating the wearing of masks in public upon the advice of state health officials.

“This is a real spike,” Miami Beach Mayor Dan Gelber said at a news conference. “Nobody can argue with the fact that more people are being hospitalized.”

California saw its third-biggest daily increase in new cases, 4,230, a 2.4% rise to 178,054, according to state data. And new signs emerged that recent protests against police brutality may have helped spread the virus.

An organizer of an anti-police brutality group in South Carolina said several of its leaders and photographers had tested positive for Covid-19, The State newspaper reported. Lawrence Nathaniel, one of the leaders of the I Can’t Breathe South Carolina movement, posted a video disclosing the results and urging protesters who marched in the group’s recent events in Columbia, Greenville and Charleston to get tested.

South Carolina is among the states in the U.S. South and Southwest seeing a surge of Covid-19 cases in recent weeks. ABC News earlier reported Pence’s comments to governors, which he made during a conference call.

In Texas, Governor Abbott cited a doubling in the positive-test rate, as well as surges in new cases and hospitalizations, as he urged residents of the second-most populous U.S. state to voluntarily wear masks and take other precautions.

Less than two hours after the governor spoke, updated health department figures showed the positive-test rate in Texas jumped to 9.51%, the highest since late April. 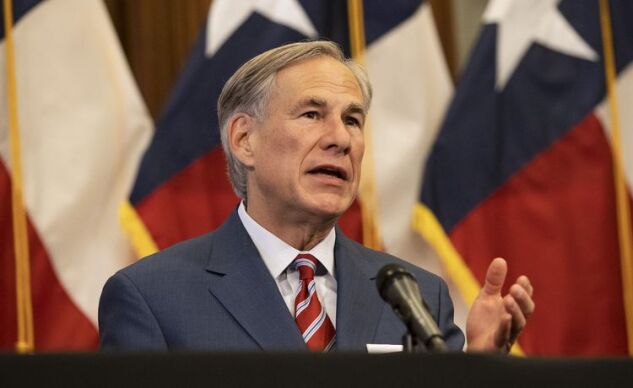 Abbott’s remarks underscore a in Republican-led states that were among the vanguard in reopening across the U.S. While Covid-19 cases are rising, and events like President ’s weekend rally in Oklahoma sow additional concern about more infections, the GOP governors’ all-in embrace of ending lockdowns makes it difficult to start reapplying restrictions to public life.

The outbreak is accelerating at “an unacceptable rate and it must be corralled,” Abbott said during a media briefing. “If those spikes continue, additional measures are going to be necessary.”

Abbott said he’s stopping short of decreeing unspecified because hospitals still have ample bed capacity for Covid-19 patients. But if positivity rates and hospitalizations should double in the next few weeks, the situation would be “urgent” enough for him to reconsider.

“Closing down Texas again will always be the last option,” Abbott said. 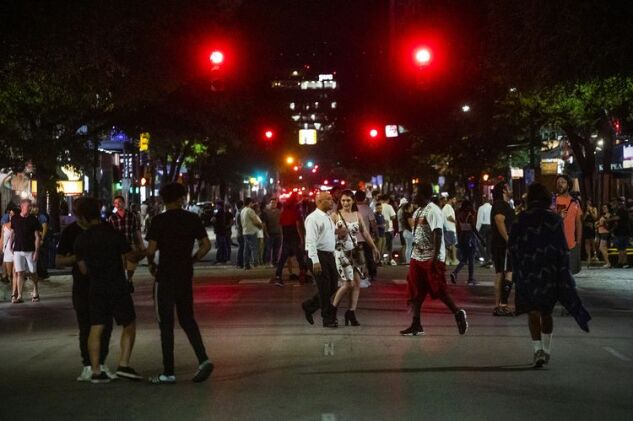 People gather on Sixth Street at night in Austin, Texas, on May 23.
Photographer: Alex Scott/Bloomberg

Texas hospitals admitted 302 new Covid-19 patients in the past 24 hours, the steepest one-day increase since June 4, according to the state health department. That put the total number of current virus hospitalizations at 3,711, more than double the May 31 tally.

In California, Governor said a jump in cases and hospitalizations is “sobering” and indicate the state is still in the first wave of the virus. He urged residents to take actions to mitigate the spread and reduce the likelihood of a return of stay-at-home orders.

“We don’t intend to do that, we don’t want to do that, but I want to make this clear: We are prepared to do that if we must,” Newsom said at a press briefing Monday. “We have the capacity, individual and collective capacity, not to have to go in that direction by just being a little bit more thoughtful about how we go about our day-to-day lives.”

To contact the reporters on this story:
in Houston at jcarroll8@bloomberg.net;
in Arlington at jkay39@bloomberg.net