A mix of rain and snow falls outside the West Wing of the White House in Washington, D.C., U.S., on Dec. 16, 2020. Images
Photographer: Oliver Contreras/Sipa/Bloomberg via Getty

Protecting Americans from surprise medical bills without inflating insurance costs will be a pivotal first-year challenge for the Biden administration, industry observers say.

The federal government will next year create a sweeping system to halt instances where insured individuals get unexpectedly expensive medical bills and to settle pricing disputes between doctors and insurers through arbitration. President Donald Trump signed the surprise billing legislation into law as part of the omnibus spending and virus aid package (; see BGOV Bill Summary).

Biden’s health and labor agencies face difficult decisions that will determine how effective that system will be and whether health-care providers or insurance companies can tip the scales in their favor. Groups that have spent years lobbying Congress on surprise billing say they’re keeping a close eye on these choices to gauge whether more legislation is needed.

“This new law hinges on what happens in regulation,” Mark Miller, executive vice president of health care for Arnold Ventures, a philanthropy that funds research and advocacy for center-left organizations, said.

President-elect Joe Biden has already promised big changes for the health insurance industry in 2021: he’s vowed to increase Obamacare’s insurance subsidies and roll back many of the changes Trump made to Obamacare’s individual insurance marketplaces.

These issues are likely to come up in the confirmation hearings for Biden’s choice to lead the Health and Human Services Department, , two congressional aides for senators who serve on the confirming committees said. 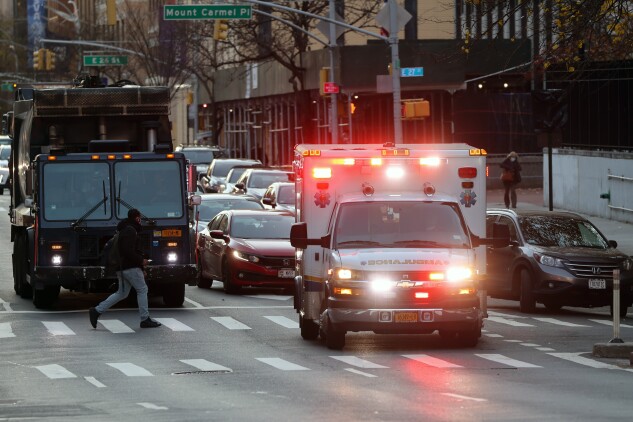 An ambulance drives through the streets of Manhattan on Dec. 2 in New York City.
Photo by Spencer Platt/Getty Images

There are several areas of the law where regulators will have to make key decisions that could shift billions of dollars each year toward doctors or insurers.

Under the new arbitration system, providers and insurers would submit an offer to an independent entity that chooses the final payment amount based on median in-network rates, among other factors. It couldn’t consider Medicare rates, which typically pay less than private insurance, or a provider’s billed charges, which tend to be higher.

The creation of this system is expected to be the focus of intense industry lobbying.

“There’s going to be a lot of pressure to do this as quickly as possible and rely on industry guidance,” Kevin Lucia, a research professor at Georgetown University, said.

If the arbiter more often agrees with health-care providers who are seeking higher payments for their services then health-care spending overall will rise, costing insurers and the government more, Lucia said.

However, the law has guardrails to keep providers from abusing the arbitration system, such as a cooling off period, Loren Adler, associate director of the USC-Brookings Schaeffer Initiative for Health Policy, said.

Starting in 2022, the law bans surprise billing for emergency medical services, for ancillary services such as anesthesia, for other care without a patient’s consent, and for air ambulance services.

The incoming Biden administration will have to spell out what regulators consider consent and how patients will be informed that they’re waiving protections against a surprise bill for planned services, Jack Hoadley, a research professor at Georgetown University who studies insurance law, said.

“I think there is room to try to do that in a way that makes it truly informed consent, but it’s something they’ll have to grapple with,” he said. “You don’t want it to get lost with all the other forms to sign.”

“From the perspective of Arnold Ventures we’re going to be watching,” Miller said. “If it goes in a bad direction we’re going to keep it in the public eye.”

To contact the editors responsible for this story: at csaenz@bloombergindustry.com; at aschank@bgov.com