Retired mail carrier Kathy Erickson figures the coronavirus makes it just as risky to stay home in Nebraska this winter as it would be to head to Florida for a few months after Christmas to escape the snow.

Erickson, 60, is the type of visitor Sunbelt states expect more of as temperatures drop in colder regions: “snowbirds,” or other seasonal residents who are largely retired and migrate short term to temperate climates. But while snowbirds are a boon to the economy in many communities, this season they may bring complications because of the Covid-19 pandemic.

Top destinations for winter travelers, such as Arizona, Texas, and Florida, don’t have testing or quarantine requirements upon arrival, and leaders in those states have largely prioritized keeping the economies open alongside public health restrictions. Some doctors and city officials worry that an approaching population boost will converge with holiday travel and gatherings to overwhelm local health-care systems as coronavirus cases surge across the country.

“Heck, yeah, we’re concerned,” Miami Beach Mayor Dan Gelber said about the Florida city known for its restaurants, bars, and beaches. “Our challenge is that our prime economic engine is essentially gatherings.”

Longtime snowbirds also are weighing the risks of traveling, though public health researchers point to the benefits of wintering somewhere warm while taking coronavirus precautions. It’s unclear how many will cancel their stays, particularly as border closures prevent Canadians from driving into the U.S., and the director of the Centers for Disease Control and Prevention has warned that this winter could be “the most difficult time in the public health history of this nation.” 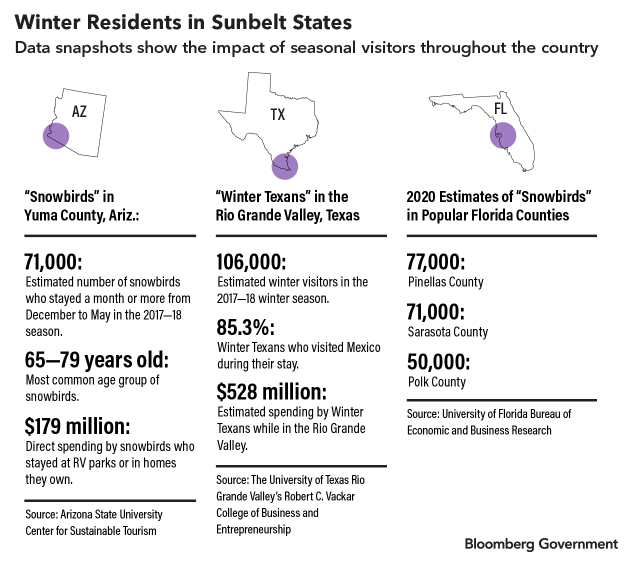 Fewer snowbirds could mean an economic hit for states like Arizona, where tourism officials say they already lost $10 billion in direct visitor spending in the first half of 2020. One million Canadians alone visit the state each year, according to Canada’s trade office.

Erickson said the pandemic hasn’t changed her plans to drive from Nebraska to a trailer she recently purchased in Leesburg, Fla. She will mask up and get a coronavirus test if she feels sick, but otherwise will enjoy rehabbing her home and going to the beach with her schnauzers.

“I’ll be doing it as safely as I can,” Erickson said.

State and local officials in Sunbelt states still expect winter residents, even if there are fewer than in typical years. Arizona increased its messaging on masks and added Covid-19 testing sites at airports in November.

Arizona’s health guidance for snowbirds notes that some may come from places with worse Covid-19 metrics than Arizona, which recently reported fewer cases per 100,000 than states such as Minnesota and South Dakota. Officials suggest that snowbirds quarantine voluntarily for 14 days upon arrival, though the state doesn’t track compliance.

The approach contrasts with neighboring states that also attract snowbirds. New Mexico requires a 14-day quarantine for people from any state but Hawaii, while California issued a November advisory discouraging non-essential travel and is now under regional stay-at-home orders.

Arizona leaders such as Tucson Mayor Regina Romero are calling for a mandatory 14-day quarantine or a negative Covid-19 test upon arrival for winter visitors. In Florida, a coalition of mayors recently asked Gov. Ron DeSantis (R) for a statewide mask mandate and more local power to implement restrictions. He declined.

Gelber said he expects at least a portion of typical snowbirds to still travel to Miami Beach this year for its outdoor amenities and warm weather. About 4,000 of the city’s property owners are from New York, out of about 92,000 residents, he said.

“We haven’t been screaming, ‘business is open,’” Gelber said. “We’ve been trying to help some of our industries limp through this time.”

Hospitals in snowbird hubs like Yuma, Ariz., are preparing for an influx of patients as winter approaches, which comes with both snowbirds and more seasonal agricultural workers in Yuma County, dubbed the “winter lettuce capital of the world.” The Yuma Regional Medical Center hires seasonal staff every year to handle the population increase but this year is preparing for a larger volume for a longer period, Chief Nursing Officer Deborah Aders said.

Yuma can handle the patient volume if people act to prevent the spread of Covid-19, Aders said. Cases are escalating, and predictive analytics show the peak may be higher than the center’s summer surge, she said.

Statewide, Arizona leaders should have anticipated the winter population swell and put restrictions in place, said Dr. Shad Marvasti, a primary care physician and associate professor at the University of Arizona College of Medicine in Phoenix. People entering the state risk carrying an outside infection, and hospital beds fill every winter even without Covid-19 patients, he said.

“The impact really would depend on what they’re doing here,” Lohff said.

There are also benefits for retirees considering wintering in a warmer state. With proper precautions, older adults are safer where it’s warm and avoid risks like falling on ice and snow, said Marcia Ory, director of the Center for Population Health and Aging at Texas A&M University.

Travelers like “winter Texans” who flock to the Rio Grande Valley should get tested for Covid-19 beforehand and consider how they will access health care at their destination, Ory said. Texas leaves it to individuals to be safe to avoid spreading the virus, she said.

Arizona also is trying to balance health with economic viability when it comes to seasonal visitors, said Kim Sabow, president and CEO of the Arizona Lodging and Tourism Association. Canadians alone spent about $2.4 billion last year, including tourists and people who own property in the state.

Sabow said some Canadians are still flying to Arizona because the land border remains closed. But businesses that rely on snowbirds will feel the absence of longtime snowbirds like Lyle Pederson who won’t come until they can drive.

“It makes it difficult,” said Pederson, who lives in Saskatchewan and usually winters in Apache Junction east of Phoenix. “When we travel, we’re quite loaded down.”

Pederson, who runs the information site Arizona Snowbird Parks, said Canadian snowbirds are weighing questions of what health insurance will cover in the U.S. amid the pandemic and what would happen if hospital beds become scarce. He guesses about 30% of snowbirds in Canada will find a way to go, particularly if they own a winter home and have a car there.

Canada requires a 14-day quarantine when residents return home. Pederson said he and his wife will still travel to Arizona if the border reopens this season.

“I often say that that’s my happy place,” he said.

To contact the editors responsible for this story: at tmay@bloomberglaw.com; at ghenderson@bloombergindustry.com