Pandemic supplies fill a 300,000 square-foot warehouse that's only one in the national stockpile.
Photos courtesy of the Department of Health and Human Services

It’s the size of three super Walmarts, containing pallets of labeled boxes as far as the eye can see. Drugs, personal protective equipment, testing equipment, ventilators, and other medical equipment—$2.3 billion worth of inventory, at a location that couldn’t be disclosed even if one could keep track of the loops around back roads you take to reach it.

Even that 300,000 square feet of vastness contains just a fraction of the Strategic National Stockpile, which as of Dec. 18 had 194 million N95 masks, 201 million surgical and procedural masks, 173 million gowns and coveralls, 72 million gloves, 23 million goggles and face shields, and about 153,000 ventilators, according to a Department of Health and Human Services spokesperson.

All of which aren’t enough to meet the federal government’s own targets from earlier this year. Now with the inauguration of the next president about a month away, Paul Mango, HHS deputy chief of staff for policy, said his plan is to pass on lessons learned, including the need to create “deeper and more effective public-private partnerships” to make sure there’s enough in the supply chain before the next Covid-sized disaster.

For all the criticism the Trump administration received early in the pandemic for saying the stockpile was never intended to serve all needs during an emergency, Acting Director Steven Adams said that’s always been the stockpile’s purpose. Mango and Adams showed the stockpile warehouse Dec. 18 to a select group of journalists, who had to agree not to disclose its location. 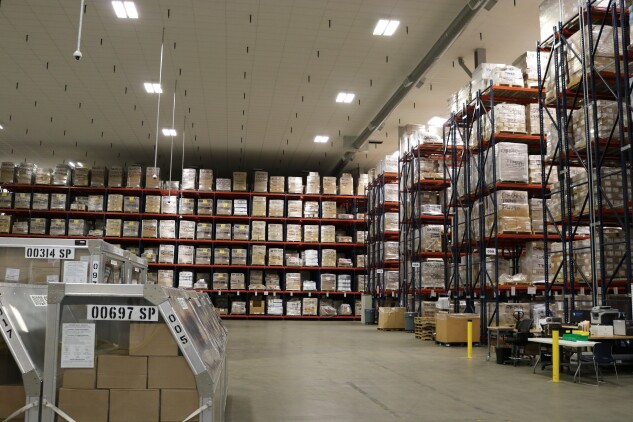 About $2.3 billion worth of drugs, personal protective equipment, testing equipment, ventilators, and other medical equipment fill just one of the many Strategic National Stockpile locations.
Photos courtesy of the Department of Health and Human Services

Right now, one thing the stockpile isn’t storing in its vast spaces is the Covid-19 vaccines.

While the warehouse Mango and Adams showed off has temperature controls for products like the anthrax vaccine, the stockpile doesn’t have anything that can store Pfizer Inc. and BioNTech SE’s Covid-19 vaccine, which requires ultra-cold freezers to keep it at -70 degrees Celsius, said David Allen, deputy chief of the SNS operational logistics branch.

The HHS set aside 500,000 doses of . and BioNTech SE’s Covid-19 vaccine and 500,000 doses of Moderna Inc.’s vaccine. However, those are being stored by Pfizer and by , which is distributing Moderna’s vaccine, Mango said.

Mango said he expects the stockpile will hold the vaccines in the future and added the government has the option to get 3 billion doses of possible Covid-19 vaccines for the stockpile. 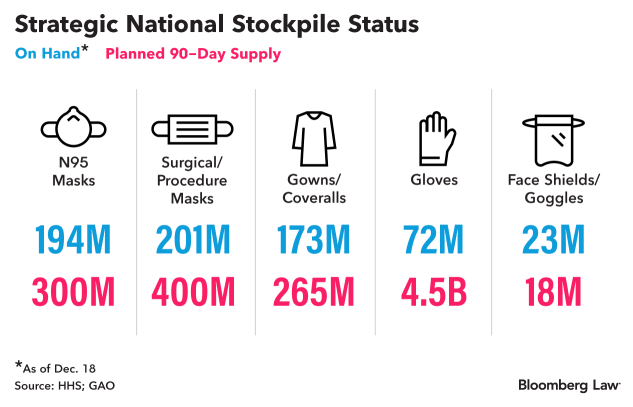 During the 2009 H1N1 pandemic, the federal government put into place many of the strategies needed to handle these sorts of events through public-private partnerships, said Adams, who has been with the stockpile since 1999 and is a career employee. However, those fell apart after the pandemic ended, he said.

If he had the money to do so, his top priorities would be sustaining the capabilities critical for Covid-19; increasing supplies needed for chemical, biological, radiological, and nuclear threats, which are short; and expanding relationships with distributors beyond this pandemic.

Right now, the stockpile holds 97% of its inventory in its warehouses. The other 3% are held by the manufacturers, known as vendor-managed inventory. Historically that’s been used for expensive, common drugs, like those used for radiation, Adams said. It’s a tool that the stockpile can use when it makes economic sense, like when supplies expire and need to be rotated.

Mango said he wants to see as much vendor-managed inventory as possible, but modern distributors don’t have huge warehouses. They get their product in and out as quickly as possible. So, the stockpile is working with distributors to expand their space to hold supplies, Adams said. 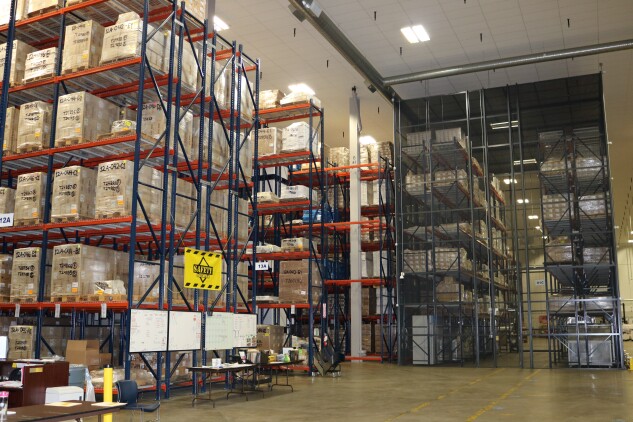 The national stockpile holds 97% of its inventory in its warehouses. The other 3% are held by the manufacturers, known as vendor-managed inventory.
Photos courtesy of the Department of Health and Human Services

Another avenue the federal government is increasingly exploring to help the stockpile and supply of products is boosting domestic manufacturing.

Adams said the stockpile is buying domestically made supplies “wherever we can,” but they’re not always available.

The government’s role in investing in domestic manufacturing is to create a lower entry cost and less risk for companies, Mango said, and it is ensuring the products will be financially competitive on a global basis.

As part of that the HHS plans to announce a half-billion-dollar investment in the manufacturing of nitrile gloves and its raw material in the coming weeks, he said.

Prior to the pandemic, the warehouse had about 18 staff working a normal shift. Now, that number can be up to 34 staff per shift. During the pandemic, the stockpile has added locations, mainly for holding PPE, Adams said, and it is hiring an 100 staff to add to its current 230 civil servants, U.S. public health service officers, and contractors.

Adams said the Biden transition team had yet to tour any stockpile warehouses, but that it had received four briefings. He added he hadn’t heard any “disconnect” in the transition team’s approach to bettering the stockpile from the current plans, which include improving the process for speedy development of vaccines, therapeutics, and diagnostics; lab testing; and data and advanced analytics.