Parts of the U.S. that haven't been hit hard yet by Covid-19 are bracing for the next wave of cases.
Thomas Coex/AFP via Getty Images

The coronavirus won’t take hospital executive Jay Johnson by surprise but he still faces many of the same problems as his colleagues in areas hardest hit by the outbreak.

The CEO of Duncan Regional Hospital three weeks ago brought his southern Oklahoma hospitals and clinics to a near halt by canceling elective surgeries and retraining health-care providers to treat Covid-19 patients.

“It’s amazing how few people are here right now,” Johnson said of the hospital. “We’re ready for something, but we’ve completely brought the business model to its knees.” 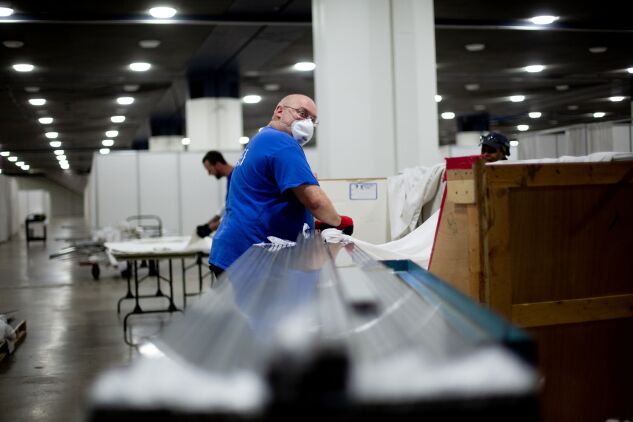 Contractors work at a field hospital inside the TFC Center in Detroit,on April 4, 2020 as the coronavirus pandemic hits the metro area.
Anthony Lanzilote/Bloomberg

Like many executives running rural hospitals and clinics in states expected to be part of the next wave of Covid-19 outbreaks sweeping the U.S. in coming weeks, Johnson’s two hospitals have seen few cases—just two by early April. Yet he’s struggling to buy enough N95 respirators and isolation gowns for what’s coming and has about a month of cash reserves to keep the health system running and pay his staff.

What You Need to Know About the Coronavirus Pandemic: QuickTake

Health centers and hospitals bracing for Covid-19 cases say they’re watching how providers in cities like New York and Seattle deal with large numbers of cases and worry about how they’ll manage the load.

“It’s like being in a war zone and you know the front is 100 miles away and you’re just wondering when it’s going to come to you,” Mary W. Wetherall, CEO of NEPA Community Healthcare in Northeast Pennsylvania, said.

“We’re continuing to track very closely out of concerns of it potentially reaching the logarithmic phase in the Chicago metro area, the Boston metro area, the D.C. and Baltimore metro areas, Indianapolis, the Denver area, and two regions of Pennsylvania: Philadelphia and the Pittsburgh area as well, and Dallas and Houston in the Texas area,” Birx said at the White House coronavirus task force press conference.

While governors are closely tracking their states, metro areas can cross state lines, so it’s critical to track cases on a very granular level, Birx said.

At the same time, the task force has its eye on Vermont, New Hampshire, Idaho, and Montana. While the cases there still remain somewhere between 25 or 50 cases per 100,000, there were “a few standouts that we were concerned about,” she said.

But after speaking with health commissioners in those states, Birx said those were micro outbreaks that occurred following ski events and weddings and at nursing homes. “They were able to describe in critical detail the incidents and how they’re tracking and tracing. So they are still doing full contact tracing through those areas,” Birx said.

Still, such smaller outbreaks highlight how the virus is both a rural and metro problem. “I really want to applaud how many of the states that may have smaller populations are approaching this,” she said.

Birx also has cautioned that rural communities need to prepare for an outbreak.

“This virus we think can spread with a lot of asymptomatic and mild cases. And it’s not until it gets into the vulnerable groups that you start to see the hospitalizations,” she said in a March 30 interview on NBC’s Today show. “So if you wait for that, if the metros and the rural areas don’t take care now, by the time you see it, it has penetrated your community pretty significantly.”

Pennsylvania authorities have urged people to stay at home as the number of cases in the state approached 13,000 April 6. The state has also turned inward to find new medical supplies, creating an online portal where in-state manufacturers can report their capability to make gloves, masks, or parts for medical devices such as ventilators.

“A surge is coming,” Pennsylvania Gov. Tom Wolf (D) said. “The when and how bad that surge is really depends on all of us, what we do.”

The virus has spread to more than 1,000 rural U.S. communities, according to the National Rural Health Association. The group is asking Congress for 20% of the $100 billion emergency fund created by the third coronavirus bill for rural health-care providers plus changes meant to send more federal funds to hospitals outside urban areas.

Many providers outside of major metro areas have had to get creative to acquire supplies. Distributors and federal authorities are sending the bulk of medical masks and gloves to big hospital systems in areas with the most cases, leaving other areas trying to prepare for the next outbreak with little opportunity to stockpile, Jason Patnosh, who has been tracking supply chain issues for the National Association of Community Health Centers, said.

“If there’s a disaster in one area then that area gets the most, that makes sense,” he said. “What we’re hearing is those areas trying to flatten the curve that is coming are having a harder time of it.”

David Shaw, CEO and administrator of Nor-Lea Hospital District, a critical access hospital in Lovington, N.M., sent two of his employees into nearby Mexico to get 2,000 gowns from a supplier when no domestic companies could fill his order.

The hospital has also gotten donations of N95 masks from oil and gas industries and nearby nursing schools, he said.

“We were literally going to run out of masks Tuesday of last week and the community saves us from that,” Shaw said.