Pedestrians walk past customers inside a bar and restaurant in the Ocean Beach neighborhood of San Diego, California, U.S., on Monday, June 29, 2020.
Photographer: Bing Guan/Bloomberg

Los Angeles, land of make-believe, tried for weeks to wish the pandemic away.

Now the coronavirus has returned — in force. Los Angeles County on Monday reported its biggest ever one-day jump in virus cases, and health officials warned that hospitals could run short on beds in several weeks. Fearing further outbreaks, they closed all beaches and banned fireworks displays for the long Fourth of July weekend. Los Angeles Mayor Eric Garcetti said the region needed to pause efforts to restart an economy so badly damaged by this spring’s shutdown.

“It would be irresponsible to move forward with any more openings right now,” Garcetti said in an interview Monday, a day after California Governor Gavin Newsom ordered county bars shut. 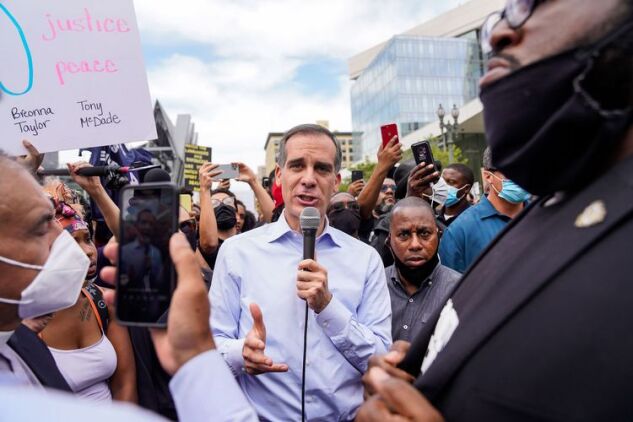 The nation’s second-largest city and the county that encompasses it face a perilous moment. Public officials don’t want to turn back on reopening, not after unemployment in the county soared past 20%. They are begging residents to heed orders to wear masks in public and stay 6 feet apart, which they say will allow businesses to restart without triggering the kind of overwhelming infection spikes seen in Florida, Texas and neighboring Arizona.

But they acknowledge their message has had trouble getting through in a county of 10 million that speaks at least 185 languages, and that includes 4,000 square miles of bustling urban neighborhoods, vast suburbs, coastal enclaves and quiet desert towns.

Coronavirus hospitalizations have jumped 27% in two weeks, reaching levels not seen since mid-April. The percentage of people tested who have the virus has hit 8.4%, well above the statewide rate of 5.9%. And the health department estimates that one out of every 140 people in the county not quarantined is infectious. A week ago, the estimate was one out of 400.

To drive around Los Angeles and its satellite sprawl of smaller cities is to see dozens of reasons why the pandemic is gaining ground.

Beyond the beaches, factories, restaurants, shops and gyms are back in business. Before Newsom’s abrupt order this weekend, Angelenos had been packing into reopened bars, some of which checked temperatures at the door but made no attempt to police patrons inside.

Robert Kim-Farley, a professor of epidemiology at , called reclosing bars “prudent and appropriate.” But it will probably take three weeks, he said, to know whether that curbs new cases. 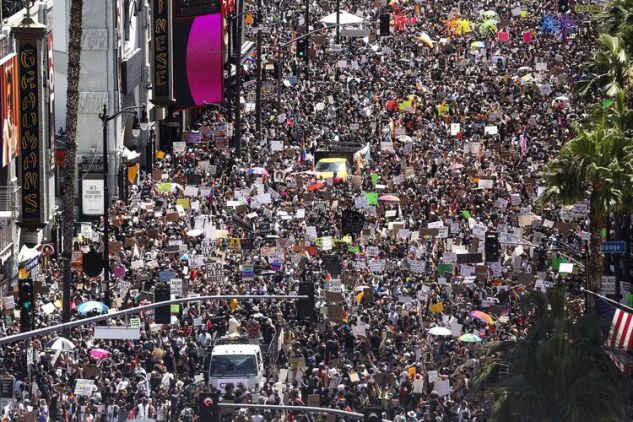 Demonstrations against police brutality and racism added another unstable element. “It’s highly likely, given the increased numbers that we’re seeing, that some of this is in fact people who may have been in a crowded situation at one of the protests,” Ferrer said last week.

Then there are the people who can’t afford to protect themselves — no small consideration in a county whose poverty rate topped 14% before the virus struck. They include small restaurateurs who don’t have websites for online ordering or curbside pickup. Low-income laborers whose bosses may fire them for showing up ill or requesting a sick day. A large pool of undocumented immigrants who avoid government interaction — even for a virus test.

“People still fear that ‘Anything I do that signs me up or puts me in somebody’s database is going to be used against me later on,’” said County Supervisor Hilda Solis, who represents a swath of largely Latino neighborhoods and cities east of downtown Los Angeles.

Many poorer areas have relatively dense populations — large numbers of people packed into apartment buildings or converted single-family homes. Not surprisingly, such neighborhoods feature prominently on the county’s online map of coronavirus cases.

Anissa Davis, a physician who is health officer for Long Beach, said hot spots in her city also include areas that house front-line workers and long-term care facilities. The city’s focus, she said in an interview before the recent spike, has been on “harm reduction.” Long Beach now has 3,643 confirmed cases and 125 deaths.

The economic diversity of Los Angeles County — trade, tourism, entertainment, manufacturing and technology — helped it weather past downturns. Efforts to contain the new pathogen, however, hit almost all those industries at once.

“It adds a level of complexity to reopening,” said Bill Allen, chief executive officer of the Los Angeles County Economic Development Corp. “There are a lot of markets in the country that have two or three key industries. We have dozens.”

California shut down earlier than any other state, avoiding the kind of runaway outbreak that tore through New York and New Jersey. With so many residents out of work, local officials felt immense pressure to restart the economy. Falling hospitalizations and stable daily death counts in May convinced them they could. Film and television studios this month were given the green light to begin production again, feeding the ravenous entertainment needs of a nation spending way too much time at home.

But this month freeway traffic rebounded to 60% of normal, according to mobile device data analyzed by . Visits to shopping strips such as Melrose Avenue and Rodeo Drive are back to half of their pre-lockdown levels. And visits to Santa Monica Beach are only 16% lower than before the virus hit. 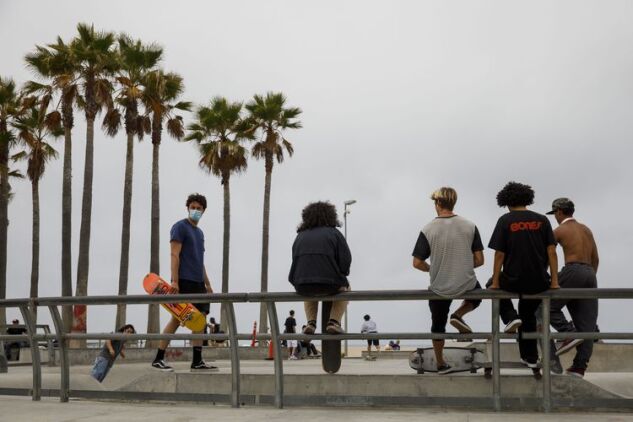 A skateboarder wearing a protective mask carries his board at the Venice Beach skate park Friday.
Photographer: Patrick T. Fallon/Bloomberg

On a recent Friday night at the nearby Hinano Cafe, a bouncer checked masks and temperatures before admitting guests. Once inside, customers played pool and guzzled beer, with facial coverings and social distancing largely ignored. Owner Mark Van Gessel later closed the pool tables after seeing how many players weren’t wearing masks. But getting all patrons to comply with safety rules was difficult, he said.

The weekend of June 13, the county health department conducted spot checks of roughly 2,000 eating and drinking establishments and found half not following rules that require spacing inside and masks for staff. The next weekend, a third weren’t complying, Ferrer said.

“We tell folks, ‘We’re coming back,’” she said. But with perhaps 44,000 bars and restaurants in the county, officials couldn’t enforce rules with just warnings and citations, Ferrer said.

Newsom’s weekend order solved part of the problem — for the moment. But the county’s broader problem may be just beginning.

“It is time for a collective course correction,” Garcetti said in a Monday evening news conference. “We can do things to take control back from Covid-19. The next two weeks will be critical weeks.”

To contact the authors of this story:
in San Francisco at dbaker116@bloomberg.net

in Los Angeles at beckhouse@bloomberg.net

in Los Angeles at cpalmeri1@bloomberg.net