With coronavirus cases surging across the U.S., the country is again facing an issue that plagued it in the pandemic’s early days: Overwhelming demand at labs has led to longer and longer wait times for test results.

Hospitals are still finding themselves short on supplies and even major labs, like Quest Diagnostics Inc., are so bogged down that the turnaround times can exceed a week.

“Unless we get test times down, we’re not going to get ahead of the virus,” said former Centers of Disease Control and Prevention Director Tom Frieden, who runs the nonprofit Resolve to Save Lives.

Testing has found itself back atop a long list of logistical snafus the U.S. has encountered since Covid-19 hit. The absence of a quick, accurate and effective testing strategy that can be scaled to demand underscores just how much the world’s largest economy has struggled to manage the fallout of the novel coronavirus.

Last week, U.S. testing czar Brett Giroir recommended only testing those with symptoms and front-line workers, as well as transitioning to tests processed on-site. Florida asked labs to prioritize processing symptomatic people’s tests. New York Governor Andrew Cuomo advised residents to only get tested at sites where local labs will do the processing. 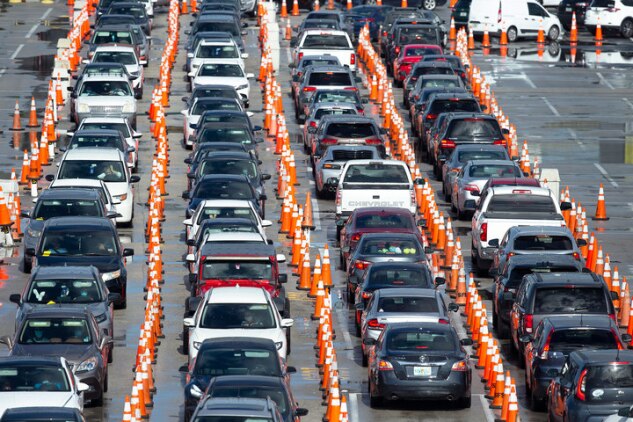 Testing is key to curbing the virus’s spread. With prompt and reliable results, the sick can be swiftly isolated and treated, and anyone they’ve had contact with can be warned to watch for symptoms and self-quarantine. Results that take more than a week stymie those efforts.

“Right now, you literally have people who wait six hours to eight hours to get a test,” said Ashish Jha, director of Harvard’s Global Health Institute, citing Texas and Arizona as examples. “Then they have to wait seven days to get results. From a public-health, disease-control point of view, it’s borderline useless because during that time that people are waiting around, they are out infecting other people.”

But testing technology has significantly improved since the early days of the pandemic. Samples can be processed where the tests are performed and results delivered in minutes.

President Donald Trump, in his first coronavirus-focused briefing since April, touted the rapid tests as a solution to the logjams, saying “those are frankly the ones that I prefer.”

Nevertheless, rapid tests have faced the same challenges as traditional testing. There aren’t enough to be effective on a large scale. New types are only beginning to come to market. The first pooled test, which allows a lab to process multiple samples at once, was cleared over the weekend by the U.S. Food and Drug Administration.

“The problem doesn’t seem like the technology, because that is there,” said Gigi Gronvall, an immunologist from Johns Hopkins University. “Like most things in life, it’s the logistics or the supply.”

Becton, Dickinson and Co.’s BD Veritor System is one of the latest rapid tests to win FDA emergency usage authorization. A patient’s sample is put on a cartridge and after 15 minutes, it’s inserted in the machine and results are posted within seconds. There are 25,000 machines in use across the country -- the analyzer had been used to diagnose strep or flu -- and the company said it expects to distribute up to 10 million cartridges to perform the tests between July and September, and to have the capacity to manufacture 2 million a week by early October. 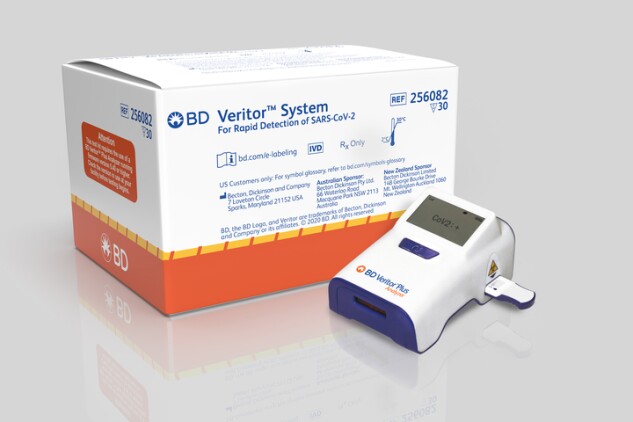 But these kinds of tests, also known as antigen tests, are designed for speedy screening of an individual patient, not mass screenings. It has yet to relieve the strain on labs from the surging demand for tests, according to Jay Wohlgemuth, chief medical officer for Quest Diagnostics.

Rapid point-of-care antigen testing “absolutely will have an important role,” Wohlgemuth said Tuesday. “But it’s not yet really making an impact on reducing the amount of PCR we need to do.”

PCR is the gold-standard technique that most tests rely on to process samples, which involves extracting ribonucleic acid, or RNA, from the virus samples taken from a patient. But RNA is unstable and requires proper storage, as well as swabs to take the samples, chemicals to process them and of course trained professionals to do all this.

Quest and Laboratory Corp of America Holdings are the biggest processors in the U.S. After lengthy waits for results early on, they brought turnaround times down to a couple days. But recent spikes in cases across much of the country has led to skyrocketing demand, sending wait times back to more than a week for most.

Both said they’re improving their turnaround times. Quest said it’s on track to meet its goal of 150,000 tests processed a day by the end of the month. LabCorp said in a statement on Monday that it’s working to improve turnaround times and has cut the average time to three to five days from when the sample is picked up. Results for hospitalized patients are shorter.

“It will be a valuable tool,” he said. “It will offset some of the PCR demand.”

Quest’s pooled test, which will begin as soon as Wednesday, will allow up to four individual swabs to be processed in a batch. Wohlgemuth said Quest hopes to double that.

“Pooling is the biggest step forward,” Wohlgemuth said. “The way we’re going to do it is very carefully identify areas of the country with lower positivity rates.”

But since a positive result would mean everyone in the batch would have to be retested to see who has the virus, it’s best suited for areas with low levels of infections. While many experts say the positivity rate needs to be below 10% for pooling to be effective, Wohlgemuth suggested that Quest’s test could be used at rates as high as 15%.

Over the next few months, the U.S. Department of Health and Human Services will purchase rapid test instruments and antigen tests from Quidel Corp. and BD. Distribution begins this week, prioritizing nursing homes.

California, which is on track to top New York with the most cases, is looking to pooled testing to speed results. There just weren’t enough rapid tests in the country’s most populous state to make a dent, the health department said last week.

In Texas, some providers are using Abbott Laboratories’s ID Now tests, the first rapid test to win emergency use approval. It can deliver results in as little as five minutes, but reliability questions have been raised, so Texas is following FDA guidance to treat negative results as presumptive -- if the patient is showing symptoms, that individual should be checked again with a different test.

Abbott said it had shipped 5.6 million of its ID Now tests across the country as of July 21, with plans to ship more than 2 million tests a month.

“With people waiting days for lab-based results, during which time they can be spreading the disease, the ID NOW Covid-19 rapid test is providing reliable results in 13 minutes or less with accuracy rates as high as 94.7% compared to lab-based PCR reference tests in the acute phase of illness,” Abbott said in a statement Tuesday.

The biggest problem for quick-turnaround tests, according to William Morice, chair of Mayo Clinic’s Department of Laboratory Medicine and Pathology and president of Mayo Clinic Laboratories, is that there just aren’t enough to go around.

“Traditionally, rapid tests like those designed for the flu, for example, were not made to test on the scale of a pandemic,” Morice said. “The tests may only take 15 minutes, but when you have an ER that is filled with hundreds of Covid patients, that time adds up.”

--With assistance from Jeannie Baumann, Shira Stein and Paul Stinson.

To contact the editors responsible for this story: Timothy Annett at tannett@bloomberg.net Heather Smith, Reg Gale