State and local health departments are pushing Congress for billions of dollars to expand their disease-tracking programs, warning that many areas of the country are reopening without systems in place to monitor the spread of the coronavirus.

Lawmakers have already provided $25 billion to ramp up Covid-19 testing, which includes $11 billion sent to state governments that could be used for tracing that involves contacting people who may have come into contact with the virus and trying to isolate those who could spread it. Such programs are key to loosening social distancing rules, health experts say.

More money, almost $8 billion, is needed to hire tracers and prepare for a possible resurgence of the virus in coming months, public health groups say. Concern is also rising that funds aren’t being evenly distributed, with few new hires coming into the agencies that are supposed to do this work.The risk: states are hundreds of workers short of the staff they need to reopen..

“The single best tool we have for bringing this virus under control and for saving hundreds of thousands of lives and for getting our economy up and running is an effective testing, tracing, and supportive isolation program,” Ashish Jha, a professor of global health at the Harvard T.H. Chan School of Public Health, told lawmakers recently. “There is nothing else.”

Lawmakers have yet to reach agreement over how much money is needed to bolster contact tracing and who should get the funds. House Democrats included $75 billion for testing and contact tracing in legislation () they passed largely along party lines in May. Senate Republican leaders have rejected that bill, saying they’ll likely wait until July to pass another economic stimulus and coronavirus response package. 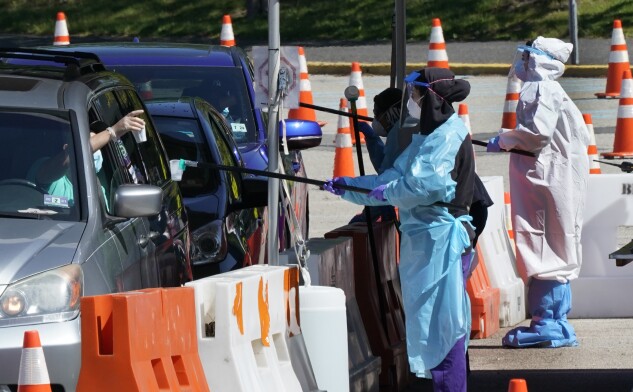 People line up for drive-thru Covid-19 testing at Bergen Community College in Paramus, N.J. on May 12, 2020.
Timothy A Clary/AFP via Getty Images

The American Federation of State, County and Municipal Employees is asking lawmakers for $1 trillion in state aid that includes hiring a permanent disease-tracking workforce across the U.S. Public health departments are “on the chopping block” as the recession caused by the spread of Covid-19 tightens state budget, a leader of the group says.

“You can’t treat this in a manner where you’re having temporary workers and expect to handle this very, very important function,” Lee Saunders, president of AFSCME, told reporters. “It’s a public service job that should be performed by dedicated, trained professionals.”

Lawmakers have been debating options for funding and staffing contact tracing across the country, including one bill () that would send $10 billion to states and Native American tribes to hire more than 100,000 tracers and support personnel, and another bill () that would provide $100 billion for a mobile testing and tracing system.

Some of the proposals lawmakers have floated would temporarily hire the newly unemployed to do much of the contact tracing, while others would establish grants. The National Association of County and City Health Officials recommended states hire about 30 people to do contact tracing per 100,000 people.

Much of the front-line work can be done by people who aren’t specialists but ultimately disease tracking requires supervision by epidemiologists and other trained professionals, said Adriane Casalotti, chief of government and public affairs of the NACCHO.

Right now, most health departments are doing contact tracing with their existing staff but that work is stretching public health thin and distracting from tracking other diseases.

Patricia DeHart, epidemiologist at the Washington Department of Health, normally works on childhood vaccination programs for the state. Instead, she told reporters, for the past few months she’s been tracking Covid-19 cases, asking people who have tested positive for the virus about their recent activity.

“Most of my colleagues have become temporary contact tracers,” DeHart said. “We’re doing the job we normally do but fighting an additional war against Covid-19.”

State governments take different tactics on creating contact tracing programs, data the National Academy for State Health Policy collected show. Indiana has outsourced the job to a private contractor; Massachusetts hired more than 1,000 workers through a local nonprofit; and Texas is expected to spend about $300 million on contact tracing over the next two years.

Without new funding, however, many health departments can’t get new staff on board, a process that takes time, Casalotti said.

“Hiring is a challenge,” she said. “Every minute we’re kind of wasting with not really focusing on action is lost. It’s not like you can flip a switch get 1,000 contact tracers in your community.”