The Centers for Medicare & Medicaid Services hasn’t provided a meaningful response to the majority of oversight requests from House committee chairmen this Congress, but it has responded to almost every chairman’s request in the Republican-led Senate, according to a Bloomberg Law analysis.

Lawmakers rely on information from the executive branch to create legislation and review how federal programs are running. Disputes between the administration and Congress over the type of information lawmakers see can hurt legislative efforts and impede oversight.

House committees are looking at a variety of health issues, including how the administration is dealing with increasing rates of maternal deaths, how it is curbing inappropriate prescribing of antipsychotic drugs in nursing homes, and how CMS Administrator Verma spends taxpayer dollars on Republican communications consultants.

The Senate Finance Committee and Homeland Security Committee are asking the CMS about federal Medicare and Medicaid overpayments and how the government is spending money on insulin, among other issues.

The CMS has received 14 oversight requests, eight from the Democrat-led House and six from the Republican-led Senate. Four letters sent by Republican senators have received substantive responses like letters with answers to questions or documents.

In contrast, the agency has provided a material response to just two of the eight letters sent by House committee chairmen, and those responses have come only in recent weeks, according to committee staff.

The unresponsiveness to House requests appears to some observers as a political choice because the ones coming from Republicans are deemed friendlier by the administration than those from Democrats. 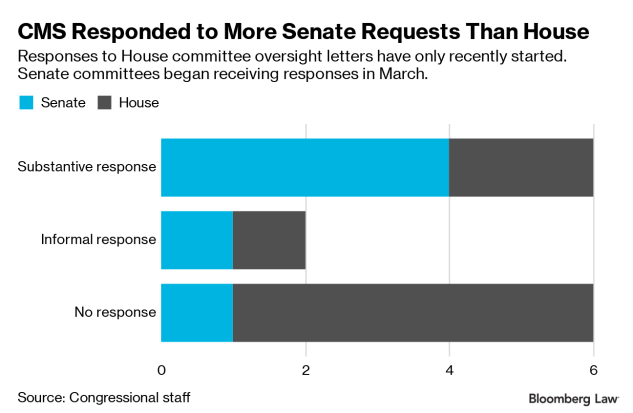 The documents that have been produced by the CMS for House committees thus far include contractor invoices related to Verma’s hiring of outside communications consultants and a letter about antipsychotic prescribing in nursing homes. CMS staff has also provided several briefings on its Centers for Medicare & Medicaid Innovation unit.

“CMS appreciates the important role of congressional oversight and works diligently to respond to inquiries we receive from both the Senate and House of Representatives,” a CMS spokesperson said in a statement to Bloomberg Law.

“We strive to provide thorough and thoughtful responses to letters we receive. CMS is constantly in touch with congressional staff, and we will continue to work with them directly on their requests,” the spokesperson said.

“It’s incredibly frustrating and it’s part of a pattern,” House Energy and Commerce Oversight subcommittee Chairwoman (D-Colo.) said in an interview. The administration has “got to understand, they have to work with the Article One branch of government.” Article One of the U.S. Constitution established Congress.

“The Trump administration has been far less responsive to congressional oversight requests than previous administrations. While [the Department of Health and Human Services] and CMS have responded to some of the committee’s oversight requests, many of those responses have been nonresponsive to the committee’s underlying questions,” a House Energy and Commerce Committee Democratic spokesman said in a statement to Bloomberg Law.

Chairmen have the discretion to ask agencies whatever they choose within their jurisdiction, regardless of the topic, a former Obama administration official said.

Agencies say they prioritize responding to a letter from a chairman or chairwoman, former aides said. Sometimes agencies will offer to brief lawmakers or staff instead of providing a formal response so they can offer the information more quickly.

It’s challenging to get documents cleared through all the people that need to approve their release to lawmakers. Letters that request a lot of documents and communications from multiple people and over many years can take a long time to identify and review.

Requests from committees on political issues can require other agencies like the Office of Management and Budget to review responses before they go to Congress, a former congressional oversight staffer said.

Responses to technical policy questions are typically drafted by the career staff who are running the relevant program, and sometimes those staff members are busy, a former HHS staffer said.

The requests could also be difficult to answer or have unrealistic deadlines. In those cases, it’s a good practice for agencies to reach out to committee staffers and propose narrowing the request or extending the deadline, Gregory Brower, a former Justice Department and Federal Bureau of Investigations congressional affairs official, said.

“There’s a difference between ignoring requests, which is almost never appropriate, and receiving a request that might be overbroad,” said Brower, now with the law firm Brownstein, Hyatt, Farber, Schreck LLP.

“Agencies have ability to slow-walk things, so you’re always balancing how much pressure you want to place on them versus how much progress is being made,” said Eagan Kemp, a former senior analyst at the Government Accountability Office and now a health-care policy advocate at Public Citizen.

Even when a request is bipartisan, an administration can consider it more risky to provide information to a committee chairman from the other party for fear the data might leak, former oversight aides said.

When information isn’t forthcoming, former aides said committees can send follow-up letters as a warning. If lawmakers aren’t satisfied with the response they’re receiving, they could also hold a hearing and call the official up to testify.

Republican chairmen in the Senate have more leverage over the administration than the House because senators have the power to hold up an agency’s nominees.

A subpoena is the last resort, but that’s not the natural instinct of most committees.