Health-care mergers and acquisitions continued to surge in October, with information technology and pharmaceuticals deals leading the way.

The 207 announced and closed deals in October mark the fourth consecutive monthly increase and are the year’s second highest monthly total, said Larry Kocot, a principal and national leader of KPMG LLP’s Center for Healthcare Regulatory Insight in Washington. That indicates a continuing strong market for deals in the fourth quarter, he said.

“With the presidential elections behind us and the transition to a Biden Administration partially underway, investor reaction to the prospect of a divided Congress seems favorable,” Kocot said.

“However, a swing in control of the Senate to Democrats based upon the Georgia run-off elections on January 5th could signal a greater possibility of major legislative policy changes for health care and life sciences, which in turn could create some headwinds for investors over the next several months,” he said.

The life sciences, medical device, and health-care IT sectors totaled more than 100 deals in October, “demonstrating a continued heightened focus on pursuing treatments and cures for diseases (COVID and beyond), and cost-efficiency in care more generally through technological advances,” Gary Herschman, a member of Epstein Becker Green’s Newark, N.J., office, said. 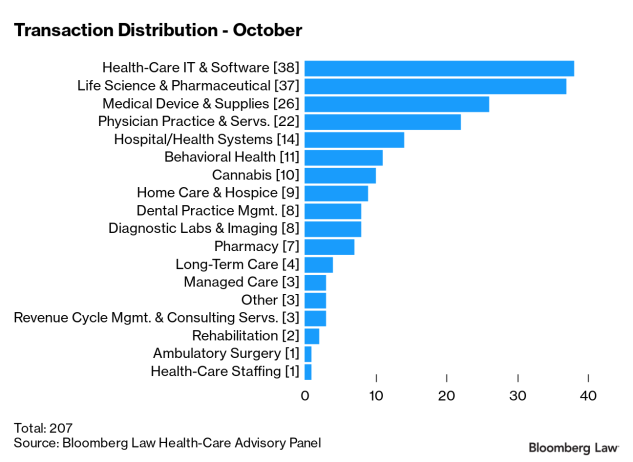 KPMG in Washington and FocalPoint Partners of Chicago prepared the curated year-to-date list and the list of select October transactions for Bloomberg Law.

Thirty-eight health-care IT and software deals were announced or closed in October, the largest number for the sector this year. Health IT has the second highest sector volume this year with 208 deals.

“The resurgence in COVID-19 cases could result in a corresponding increase in telehealth and other remote patient services, driving renewed investment interest in the sector,” Kocot said of health-care IT deals.

In one transaction of note, Veritas Capital Fund Management LLC, a private equity firm based in New York, acquired for $5 billion the U.S. state and local health and human services business of DXC Technology Co., based in Tysons, Va., forming Gainwell Technologies.

Life science and pharmaceuticals had 37 deals in October.

“Recent positive news from Pfizer and Moderna on COVID-19 vaccine efficacy could continue to drive investment interest and confidence that the end of the pandemic and a path to economic recovery may be in sight; however, the recent surge in COVID-19 cases across the country could impact this accelerating growth trend in the short term,” Kocot said. 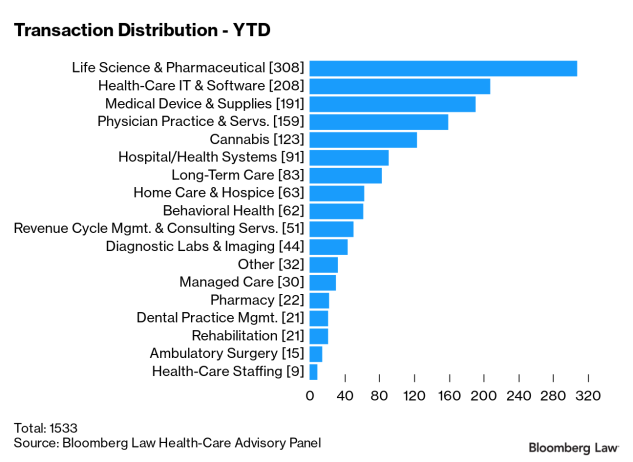 Hospital consolidations are “expected to increase substantially over the next 6-12 months as smaller independent hospitals seek to partner with larger hospital systems to benefit from their robust infrastructure and considerable capital,” Patel said.

The two sizable nonprofit health-care systems are planning to form a more than $15 billion revenue system with 70 hospitals, 89,000 employees, and 435 clinics in seven states, Torres said. The combined system will be the seventh largest in the country based on revenue, he said.

Unlike other health system “megamergers,” the two systems don’t have overlapping geographic footprints but will form a large health system across the West, Torres said.

Deal volume has also accelerated over the past few months among physician practices and services “as organizations have been able to more fully appreciate the impact of COVID-19 relative to their operational and financial profiles, often resulting in the need to contemplate strategic transactions,” Torres said.

There were 22 physician practice deals announced or closed in October.

One deal announced in October was the sale of Anne Arundel Dermatology from NMS Capital, a New York private equity firm, to Ridgemont Equity Partners, after NMS Capital built the practice into a large multi-state provider in the Mid-Atlantic and Southeastern states, Torres said. Terms weren’t disclosed.