The global pandemic has created a new opportunity for insurance companies to deny people long-term disability benefits, putting patients in the difficult position of deciding whether to risk losing their benefits or chance catching a life-threatening disease.

Benefits attorneys say they’re seeing more requests from insurers for in-person medical exams and evaluations during a public health crisis that’s limited the number of doctors available and forced many businesses to shut down in an effort to curb the deadly virus.

It’s an easy way for insurers to deny or terminate disability benefits if the request is refused, attorneys say, but it may not be legal.

Insurers have mostly backed down when people, citing fears of contracting Covid-19, hire an attorney to push back on these requests. But not every long-term insurance recipient has the money or the access to outside counsel to try.

Chris Lunda had been permanently disabled for almost 10 years when Guardian Insurance asked him at the start of the Covid-19 pandemic to go to a physical therapist for a four-hour, in-person exam to measure his functional capacity.

“Initially, I thought ‘Are you crazy? Do you watch the news?’” said the 57-year-old former marine surveyor from Metairie, La. Lunda was injured after falling on the job in July 2010. He wasn’t able to get the spinal surgery he needed until 2012 due to a delay with his insurer approving the procedure, and he suffered permanent nerve damage in his left leg as a result.

“Reasonable is a real flexible word in the law,” he said. “It’s up to federal judges to decide whether or not these are reasonable requests.”

Warncke argues reasonableness should be viewed by the totality of the circumstances, including the timing of the request.

Outside of a pandemic, attorneys say it’s rare for a judge to interfere with a required examination. ERISA, which is the federal law governing most disability claims and how they’re processed, has a standard of review that requires judges to defer to insurers unless the request is unreasonable.

Guardian said it couldn’t comment on the specifics of Lunda’s claim.

“Numerous courts have recognized that functional capacity evaluations are an important and objective tool to assess a claimant’s occupational restrictions and limitations,” the company said in a statement. “Guardian only requests such examinations if the provider verifies that the examination can be performed safely and in accordance with all Covid safety protocols and regulations.”

But the exam Guardian was asking Lunda to complete didn’t seem reasonable or necessary since Lunda isn’t going to miraculously recover, Warncke said.

“Suddenly, 10 years into the claim, in the middle of a raging pandemic, Guardian is insisting he go for a four-hour physical examination. It didn’t really add up. It felt and feels abusive,” he said.

Lunda ultimately retained his own provider to perform the exam Guardian was insisting on and the company has agreed to continuing paying benefits indefinitely. Though it was a positive outcome, Warncke said it put his client in a difficult position—either risk contracting Covid-19 or lose his benefits.

One attorney said he’s seen requests for independent medical exams (IME) come from insurers who typically don’t ask for them.

Jonathan Feigenbaum, a Boston-based attorney who represents disability claimants, said his client, whose inflammatory disease sarcoidosis presented a high risk for Covid-19 complications, was recently required to submit to an in-person exam.

But the insurer that required the exam rarely requests them and often turns a deaf ear when other claimants ask for them, Feigenbaum said.

“Often when a claimant says, ‘Please send me to an IME if you don’t believe me,’ the insurer ignores the request,” he said. He declined to name the insurer that made the request.

Some insurers paradoxically may be using the across-the-board decrease in in-person medical care that’s been driven by the pandemic as a reason for demanding more in-person exams, said Marie E. Casciari, a shareholder with DeBofsky, Sherman, Casciari, Reynolds P.C. in Chicago.

Insurers sometimes link the frequency of an individual’s treatment to the severity of their condition, which can cause them to equate fewer doctor visits with exaggeration of the disability or even improvement, according to Casciari. 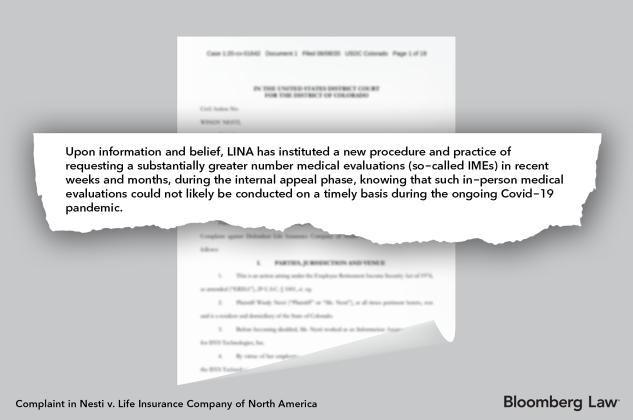 Disability rights advocates are concerned about people who receive Social Security Disability Insurance being forced to go in-person for exams, too. The Social Security Administration requires periodic exams during continuing disability reviews. The SSA paused these reviews in March, but decided in August to restart its work.

The Consortium for Citizens with Disabilities sent SSA Commissioner Andrew Saul a letter in October asking the administration to make it clear people can ask to have these exams postponed. In a response letter Dec. 29, Saul assured the consortium that SSA is not ceasing benefits due to a beneficiary’s inability to attend a consultative examination (CE).

“COVID-19 related concerns are a good reason to cancel, postpone or reschedule a CE,” he said in the letter. “We instruct the DDS [disability determination services] to notify claimants and beneficiaries that they may request to postpone their CE without penalty, if a claimant or beneficiary has concerns with COVID-19 exposure.”

But advocates worry it’s not clear to beneficiaries that’s an option when they get these requests from the SSA.

“For everyone with a disability, losing these benefits is really terrifying,” said Bethany Lilly, senior director of income policy at The Arc, a nonprofit that advocates for people with intellectual and developmental disabilities.

Lilly is hoping the commissioner will reconsider and issue updated guidance making it clear in-person exams can be postponed.

People who have a disability and who are at a higher risk of catching Covid-19 shouldn’t have to go to doctors’ offices where they might be exposed, she said.

Most disputes with private insurers don’t make it to a courtroom. Life Insurance Company of North America, however, has had two cases brought against it for trying to force an in-person IME during the pandemic.

Arizona resident Jenifer Ahring accused the Cigna Group Insurance subsidiary in a Jan. 8 suit of being “extraordinarily aggressive” in demanding in-person medical exams to assess long-term disability claims since the beginning of the Covid-19 pandemic. She said she believed it to be a “deliberate, bad faith practice of Cigna to try to manufacture reasons to terminate legitimate LTD claims.”

In a lawsuit filed in June, Windy Nesti, of Colorado, said LINA terminated her disability benefits and dragged out her appeal by requesting an in-person IME. The company “has instituted a new procedure and practice of requesting a substantially greater number [of] medical evaluations (so-called IMEs) in recent weeks and months, during the internal appeal phase, knowing that such in-person medical evaluations could not likely be conducted on a timely basis during the ongoing Covid-19 pandemic,” her complaint said.

In an answer brief, LINA denied that it has instituted a new practice of requesting a greater number of IMEs during Covid-19, but gave no further response.

Both Ahring and Nesti ultimately dropped their lawsuits, which signals they reached some sort of an agreement with Cigna. Cigna declined to comment on the cases or its recent requests for IMEs during the pandemic, saying in a statement it has no information to provide at this time.

In most cases, insurers back off when they’re challenged on the request, attorneys say.

“When complying with an IME request would put my client in harm’s way (when the client is immunocompromised, for example), I have pushed back on the necessity of the IME and each time the insurance company has caved and canceled,” said Michelle Roberts, a partner with Kantor & Kantor LLP in Alameda, Calif.

Because many disability policies require compliance with requests for in-person exams, Roberts said she’s hesitant to advise clients to refuse “carte blanche.” Instead, she asks insurers to justify why the increased health risk is necessary and requests that they accept liability for any fallout.

“So far, this strategy has worked,” she said.

Edward Dabdoub, managing partner at Dabdoub Law Firm in Miami, Fla., said his firm has had about six clients get requests for an in-person IME during the pandemic. In every case, he said the insurer backed off—but not without a good fight first.

“I have to wonder how many people don’t have a savvy attorney in this practice area,” Dabdoub said.

Claimants who aren’t represented or represented properly may feel compelled to go for the exam or risk having their benefits terminated for failure to cooperate with a provision of their insurance policy, he said.

—With assistance from Shira Stein.