The long-term care sector is the most active sector in health care mergers and acquisitions so far in 2019 and have increased 43% from the first six months of 2018. Epstein, Becker & Green attorneys and health industry financial/investment analysts highlight this and other common themes in health-care deals so far in 2019.

Through June 2019, total announced/closed transactions reached over 586 deals, compared to 530 at this point last year. A combination of private investment firms with ample capital to deploy, supportive macroeconomic factors and evolving consumer trends have contributed to this high deal volume, with strong expectations for the remainder of the year. 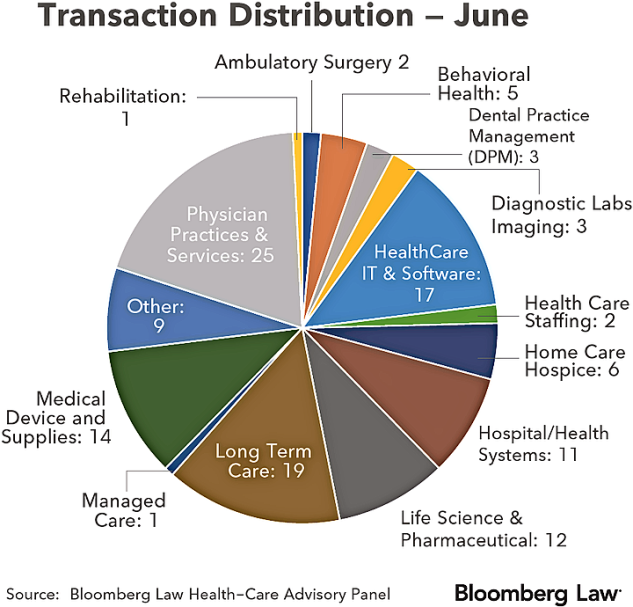 The aging general population and recent health-care initiatives have expanded the pool of insurance coverage for those that require long-term care. According to the United States Census Bureau, the 65-plus age segment is expected to expand from 52 million in 2018 to 78 million by 2035, representing a nearly 50% increase.

Additionally, Baby Boomer Magazine reported the baby boomer generation is turning 65 at a rate of 3-4 million per year. These advanced age segments are driving service volume within the sector; however, they have had an unfavorable impact on the broader payor mix and reimbursement rates for providers following changes to the Medicare payment model.

Reacting to these unfavorable effects, long-term care organizations have shifted focus to improving operational efficiencies via economies of scale, resulting in further industry consolidation. In addition to strategic acquisitions, long-term care organizations have also attracted interest from financial sponsors such as private equity groups and real estate investment trusts (REITs) due to the sector’s relatively stable cash-flows and inherent value of the real estate that comes packaged with business operations.

With 19 of the YTD transactions coming in June, the rapid rate of consolidation within the long-term care sector shows no signs of slowing down in the foreseeable future.

Physician practices and services continue to ride a strong wave of consolidating transaction activity, supported by increasing private equity investment. Independent groups across the nation have been feeling competitive pressure to follow the wave in order to reduce back-office spending and improve access to capital related to investment in IT and value-based care solutions.

During June, UnitedHealth Group completed its previously announced acquisition of DaVita Medical Group, one of the nation’s leading independent medical groups, through its subsidiary, Optum, for approximately $4.3 billion. After extended negotiations with the FTC, this transaction marks another significant step forward in connecting payors with providers.

The continuing success of private equity platforms has driven further sector investment and consolidation. Approximately half of June’s physician practice and services deals involved eye care and dermatology practices. During the first half of 2019, specialties such as dental, dermatology, radiology, ophthalmology, obstetrics-gynecology, fertility, podiatry, oncology, ENT, orthopedics, gastroenterology and urology have led the way in attracting private equity interest as new platforms are being supplemented with an increasing amount of bolt-on investments.

Acuity Eye Group has been one of the most active platform physician groups, acquiring five ophthalmology practices as bolt-on investments thus far in 2019 through their financial sponsors ACE & Company and Riata Capital Group.

One of the largest private equity deals of the year was announced in June with CityMD, a portfolio company of Warburg Pincus, set to acquire Summit Medical Group. This acquisition expands the east coast urgent care group’s service offerings into primary and specialty patient care. Private equity firms are expected to continue utilizing the existing platform infrastructure and management to streamline services both regionally and nationally via bolt-on investments. 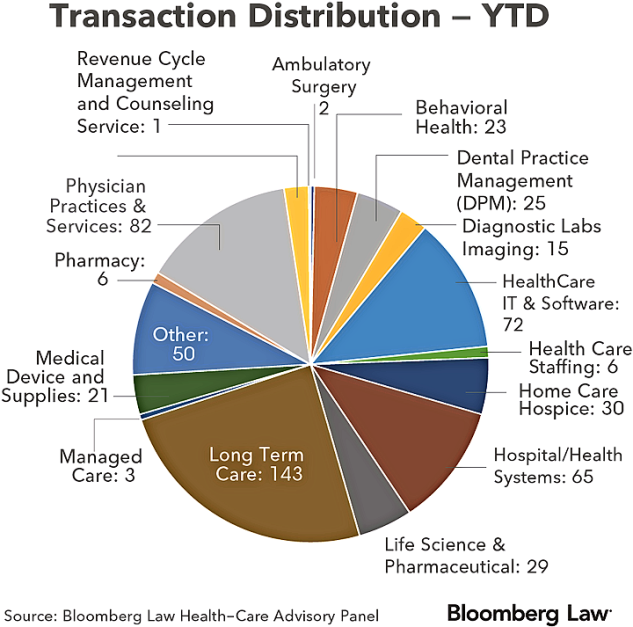 Consolidation across the hospital/health system landscape continues to be a key theme this year, with independent operators seeking scale and access to capital through partnerships. While transaction activity has not been at the same pace as last year (65 deals YTD 2019 compared to 109 YTD 2018), the last few years have seen unprecedented levels of mergers and acquisitions.

Among June mandates, West Virginia University Health System and Conway Regional Health System each added additional hospitals to their portfolios, with the acquisitions of Barnesville Hospital and River Valley Medical Center, respectively. Another defining trend this year are the cross-state combinations of health systems forming regional organizations. At the end of June, South Dakota-based Sanford Health and Iowa-based UnityPoint Health announced their intention to merge into an $11 billion integrated health system encompassing 76 hospitals across 26 states.

Recently completed regional transactions include the formation of CommonSpirit Health between California-based Dignity Health and Colorado-based Catholic Health Initiatives, and the acquisition of North Carolina-based Mission Health System by national for-profit operator HCA. The sustained asset sell-off by for-profit operators including Community Health Systems and Tenet Healthcare have contributed to overall M&A activity, with CHS specifically in the midst of attempting to generate $1.3 billion in gross proceeds related to hospital divestitures by the end of the fiscal year.

The expansion of technology across the health-care universe has remained a key component that is fueling transaction activity. Total YTD transactions are on par with last year, with 72 announced/closed deals through June of 2019 compared with 68 through June 2018, with monthly volume up slightly at 17 deals compared to 16 last June.

Similar to the physician group sector, private equity firms have been an active acquirer in the IT/software space due to the relative fragmentation and opportune scalability. As recently as June, Thomas H. Lee partners completed its acquisition of Nextech Systems from Apollo Investment and Francisco Partners in a transaction valued at over $500 million. Additionally, Nordic Capital agreed to acquire ArisGlobal for approximately $700 million. Within the software sector, payment processing has become a national trend with the shift from cash-based to electronic-based transactions.

Competition among life science and pharmaceutical organizations for the discovery and ultimate marketability of groundbreaking products has intensified in recent years, leading to outsized levels of transaction activity in both deal quantity and economic considerations. June in particular was witness to several industry-shaking announcements, with the proposed $63 billion Abbvie—Allergan merger and the $11 billion Array BioPharma acquisition by Pfizer among the most noteworthy.

Separately, the ability to distillate and organize data has become increasingly important in this technology-driven environment. As such, the acquisition of Press Ganey, a provider of patient experience and workforce engagement solutions to healthcare organizations, by private equity firms Ares Management and Leonard Green Partners represents an intriguing foray into this sector.

Epstein, Becker & Green P.C. did not comment on any particular transaction or party discussed or listed in this article.