The emergency room at a hospital in Tucson, Ariz.
(Photo: SEBASTIEN VUAGNAT/AFP via Getty Images)

Hospitals, which are responsible for the biggest share of U.S. health-care spending, are beginning to wake up to the reality that they need to reduce their costs. But few have met even their own modest goals for doing that.

Analysts and employer groups point to a range of reasons why hospitals are having a hard time reducing costs, such as high labor costs and a big need for capital to fund strategic initiatives.

Hospitals also can escape pressure to control their costs because they’re able to charge employers pretty much at will since employers have fewer choices due to consolidation. Hospitals justify their higher charges to employers saying Medicare rates are low, but they have few incentives to reduce costs since most of them are nonprofits that don’t have to worry about paying a return to shareholders.

“In the current marketplace, hospitals see consolidation and reputation-building and building capacity in geographic areas with large numbers of privately insured as the way to thrive, not cost cutting and price discounting,” Chapin White, a senior policy researcher with the RAND Corp., said in an email.

Hospital costs accounted for $1.1 trillion (33%) of U.S. health-care spending in 2017, according to the Centers for Medicare & Medicaid Services, the most recent year that such figures are available. For private insurers, the proportion of hospital costs was even higher, at 44% of personal health-care expenses. Most private insurance is covered by employers. 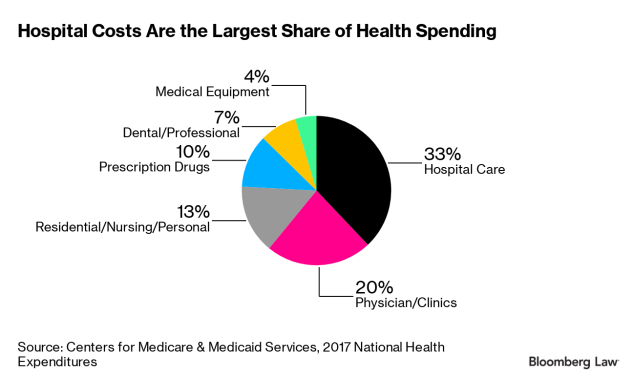 CMS projects that hospital costs will account for $1.3 trillion in 2019, rising more than 5% from 2018, well above general inflation.

Chicago-based hospital consulting firm Kaufman, Hall & Associates LLC recently released a report finding that while nearly all U.S. hospitals have set modest cost-reduction targets, only 23% have met even their modest goals. Wage inflation as well as capital needs were cited by hospital leaders in the report as factors that make it difficult to hold the line on expenses.

At the same time, the hospital industry faces flat or declining inpatient volumes and too many beds for the health-care needs today.

“We’ve just got a whole set of assets that you don’t really need any more,” Ken Kaufman, managing director of Kaufman Hall, said in an interview. Services such as joint replacements that used to require hospital stays are now done on an out-patient basis, which results in much lower revenues, he said.

The report highlights the need for hospitals to have reliable cost data so that they can compare themselves with other providers and identify opportunities to become more efficient. In addition, hospital leaders need to be held accountable for achieving cost reduction goals, it said.

Ironically, high payments from commercial insurers and employers have enabled hospitals to escape cost reduction, White said in an interview. White is the lead author of a report finding that employers pay an average of 239% of Medicare rates at many U.S. hospitals.

Many hospital systems are nonprofits, and without a need to distribute earnings to shareholders, “They’ll figure out how to spend whatever revenues they bring in,” by paying higher wages or adding more staff and equipment White said.

Commercial revenues to hospitals have been growing, “and then those generous commercial revenues take the pressure off hospitals to operate more efficiently,” White said. The result is that hospitals are increasing their expenditures, which they pass on to employers through higher prices and higher inflation, rather than trying to control their costs and prices.

Consolidation has contributed to the ability of hospitals to charge higher prices to employers, Robert Smith, executive director of the Colorado Business Group on Health, said in an interview.

In Colorado, where hospitals receive some of the largest private payments compared with Medicare, independent hospitals tend to offer lower prices than the larger health systems of multiple hospitals, Smith said.

And those hospitals in Colorado could serve as an example to others for ways to reduce costs.

The Colorado Business Group on Health, which represents 17 employers, will lead the first statewide purchasing alliance to negotiate contracts with hospitals in which the negotiated contract rates will be available to non-member employers in the state, such as small businesses, as well as health insurers and individuals buying health plans in the Affordable Care Act exchanges, Smith said.

The group is targeting offering self-funded companies such contracts by Jan. 1, 2021, and fully insured group plans and individual plans by July 1, 2021.

But employers will have to take additional steps to lower their hospital costs, Smith said. Companies must be willing to give their employees incentives to travel to lower-cost, high quality institutions, he said.

Smith pointed to Boulder Community Health, a 170-bed independent facility, as a good example of a hospital that provides good outcomes for patients at lower than average costs in the state.

To reduce costs, employees work at the “top of their licenses,” Jacqueline Attlesey-Pries, vice president of operations, said in an email. That means lower-paid personnel, such as nurse practitioners, can be substituted for doctors. In addition, it has consolidated clinical areas and reduced locations, eliminating nonessential services, she said.

For example, it has been able to invest in inpatient mental health facilities, which many hospitals don’t have, Vissers said.

Moreover, Boulder Community has been able to earn more revenue and keep costs down by attracting patients from other areas in the region, Vissers said.

The hospital provides better health outcomes for services such as open heart surgery, neurosurgery, and orthopedics, he said. As a result, even while experiencing a 7% increase in patient volumes, this year it is on track to keep its expense increases to 2.8%, which allows it to maintain low charges, he said.

Getting Costs Under Control

To get costs under control, hospitals need to have a better understanding of their own costs, Gloria Sachdev, president and chief executive officer of the Employers’ Forum of Indiana, said in an interview. Indiana hospitals are among the highest-priced in the nation compared with Medicare, according to RAND.

In addition to variation in costs among hospitals, there is “significant variability in costs per physician per service within the same hospital” in Indiana, Sachdev said.