January set the stage for another banner year for transactions in the health-care industry, suggesting 2019 may even surpass 2018’s record deal volume.

Over 100 deals were announced or closed during the first month of the year, according to a list compiled for Bloomberg Law by investment bankers at ECG Management Consultants and Provident Health Care Partners.

The overall numbers aren’t surprising, given that many deals closed in January were mostly completed in 2018, Gary W. Herschman, a member of Epstein, Becker & Green’s health law practice in Newark, N.J., told Bloomberg Law. Sellers can realize tax advantages by closing at the beginning of the year, rather than at the end, he said. 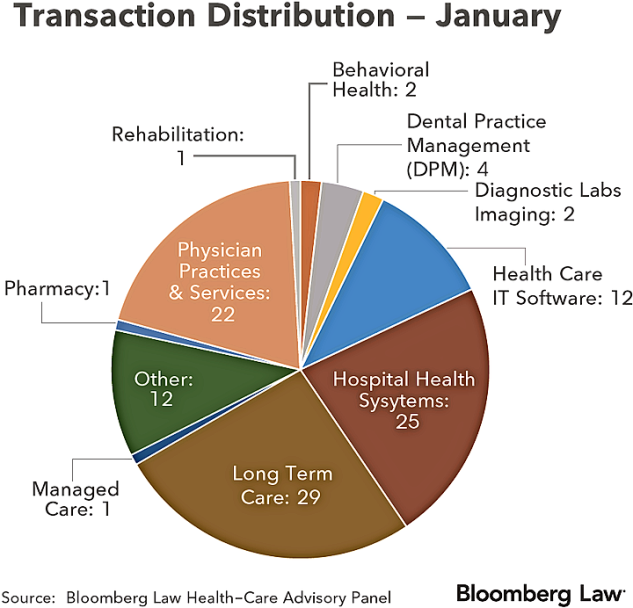 But the biggest growth area was in the hospital health system sector, where 25 deals were announced or closed in January. That was 10 more than in January 2018, Hector M. Torres told Bloomberg Law. Torres is a principal with ECG in Chicago.

The hospital-health system sector put in a strong showing, but still came in second to the long-term care sector. Most of the 29 deals there involved senior housing, followed by skilled nursing facilities and assisted living centers, Herschman said. More than 30 properties were exchanged in each of the senior living and SNF subsectors, he said.

This was an increase over January 2018, when there were 16 long-term care sector deals announced, ECG’s Nicholas Davis said.

Welltower Inc., which invests with senior housing operators throughout the U.S., Canada, and the U.K., will buy 55 health-care properties from CNL Healthcare Properties for $1.25 billion. And Omega Healthcare Investors Inc. and MedEquities Realty Trust announced a $600 million merger, Newman said.

“Investors targeted companies that develop software to enhance efficiency and communication between patients and providers,” including programs for improving patient engagement through telemedicine video portals that comply with the Health Insurance Portability and Accountability Act, Shtern said. More deals are likely, as providers try to copy the consumer-centric features of e-commerce and retail companies, he said.
_________