Dayna James, an emergency department nurse in Miami, said some days she’s had to clean patient rooms with hand sanitizer because no disinfectant wipes were available. Other days she was rationed to three Clorox wipes per room. Like many colleagues around the U.S., she gets a single N95 mask per shift, which means she may bring a potentially contaminated mask into a new patient’s room, ignoring longtime standard practice.

“Even that, we’re grateful to have one,” James said. 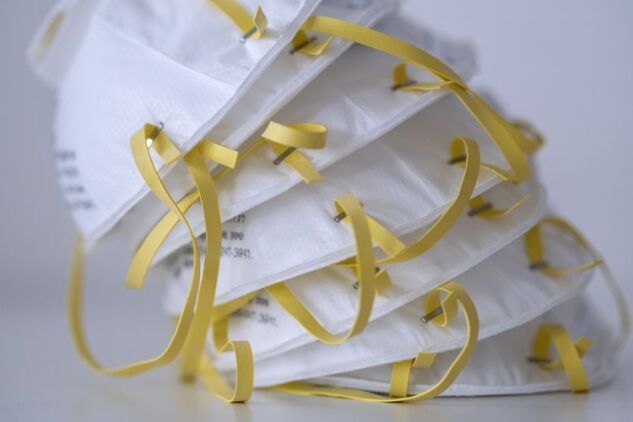 With the virus now surging in many large states, led by Florida and Texas, the nationwide pace of demand for the N95 respirator masks that give health-care workers the best protection is 300 million a year, up from 25 million prior to the pandemic, according to , which helps hospitals and other health-care providers buy supplies. And it’s not just hospitals affected.

Almost one-fifth of nursing homes have less than a week’s worth of PPE, and the N95 masks designed to be used in health-care settings are scarce, according to a letter the industry groups for nursing homes and assisted living facilities sent to governors Tuesday. That shortages persist months into the pandemic response “is very concerning,” the groups wrote. Meanwhile, physicians trying to re-open medical offices have similar concerns.

PPE and disinfectants “simply are not readily available from the usual sources our physicians use,” the wrote in a recent letter to the .

It’s a challenge compounded by competing demands: While facilities in some states including Florida and Texas are burning through their supplies quickly as their hospitalization rates surge, other states such as New York and New Jersey have seen a dramatic pullback in their immediate needs. Medical providers and government authorities fearful of a new wave of infections are now trying to build up stockpiles.

The situation makes it hard to gauge the true rate at which the country is using up scarce N95 masks. “What we don’t know is how many of those are going into these efforts to create stockpiles,” said Chaun Powell, group vice president of strategic supplier engagement at Premier.

New Jersey offers a case in point. Governor said on Monday that his state aimed to build a stockpile that would last 30 or 90 days. “But we’re not there yet,” he said. “We still don’t have the PPE we need as a state or as a country. And that’s just a fact.”

Domestic output of N95 masks has increased, with new projections of 110 million N95s manufactured this year compared with 30 million before the pandemic, according to Premier. Still, Powell said his company is calling for better coordination of national and local stockpiles to head off future shortages.

Coronavirus cases rose 2% in the U.S. on Wednesday to 3.47 million, and deaths reached 136,940, according to data collected by Johns Hopkins University and Bloomberg News.

Nursing homes with older residents who are highly vulnerable to the virus and outpatient centers dealing with those suffering other ailments are particularly hard hit. Historically, they didn’t need the kind of PPE now in demand, so they don’t have longstanding relationships with suppliers, Powell said, making it harder to get scarce equipment.

Kim Smith, an intensive care nurse at an facility in Corpus Christi, Texas, echoed Dayna James’s concerns about single-use N95 respirators. The staff in her facility use the same mask for the entire shift, she said, a practice that has become common to preserve supplies. At the end of the shift, the masks are collected for reprocessing.

In recent days, Smith said, she’s had to wear the same gown in multiple patients’ rooms if it’s not visibly soiled, rather than getting a fresh gown for each patient as she usually would. The hospital expanded its intensive care capacity from 21 beds to 35, she said, noting they’re full of Covid patients.

“We’re in full surge mode,” said Smith, who is a representative for the union. “The hospitals are completely full. It feels like Covid’s everywhere.”

Smith typically takes care of two critical patients at one time. On her shift Monday she was “tripled” with an additional patient to attend to. She’s noticed colleagues sidelined by illness, and worries about her own safety, or exposing her teenage son who lives with her.

The hospital has the supplies it needs and, like other hospitals, is following “crisis standards of care” according to guidelines from the U.S. Centers for Disease Control and Prevention, said Eric Deppert, chief medical officer at Corpus Christi Medical Center, in a statement provided by a hospital spokeswoman. That includes decontaminating N95 masks for re-use and extending the use of isolation gowns for staff treating multiple patients with the same infectious disease.

“Despite a pandemic that continues to strain the global supply of PPE and presents unique challenges to hospitals everywhere, we remain focused on protecting our colleagues so they can continue to provide care to our communities,” Deppert said.

Front-line workers say the new standards of care can sometimes leave them feeling exposed as the pandemic that blindsided the medical system in the spring accelerates.

“In nursing school, I would’ve gotten written up with a big-time unsatisfactory mark, like in a simulation” for bringing a potentially contaminated mask into a new patient’s room, James, the Miami emergency room nurse, said. “And now that’s the norm.”

(Adds U.S. coronavirus cases in the 11th paragraph. A previous version corrected the spelling of Clorox in the second paragraph.)

To contact the reporter on this story:
in New York at jtozzi2@bloomberg.net