A health-care worker administers a third dose of the Pfizer-BioNTech Covid-19 vaccine. Booster shots are expected to be a boon for some companies.
Photographer: Hannah Beier/Bloomberg

The pace of mergers and acquisitions in health care remained brisk in August and appears likely to continue or accelerate for the rest of what could be a record-setting year.

Overall, August saw 252 deals, bringing the monthly average for the year to 243, a sharp increase over 2020’s average of 161, said Larry Kocot of KPMG in Washington.

But the recent surge in Covid-19 cases could present short-term headwinds for health-care sector investments amid over-strapped hospitals and disruptions in staffing and care, Kocot said.

“The country remains well short of ambitious Covid-19 vaccination rate targets, and some parts of the country are experiencing the worst pandemic conditions in over six months,” he said.

The life sciences and health-care information technology sectors led the way during August, with 53 and 36 closed and announced transactions, respectively. 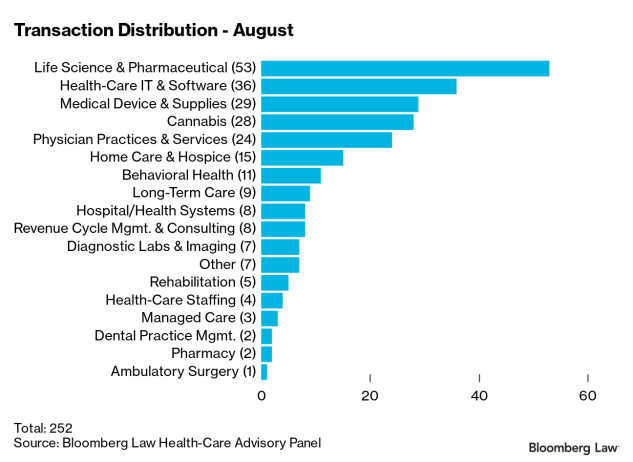 The total number of deals for the year could exceed 3,000, which would stand as a record, said Gary Herschman, also of EBG.

KPMG in Washington and FocalPoint Partners of Chicago prepared the curated year-to-date list and list of select August transactions for Bloomberg Law. 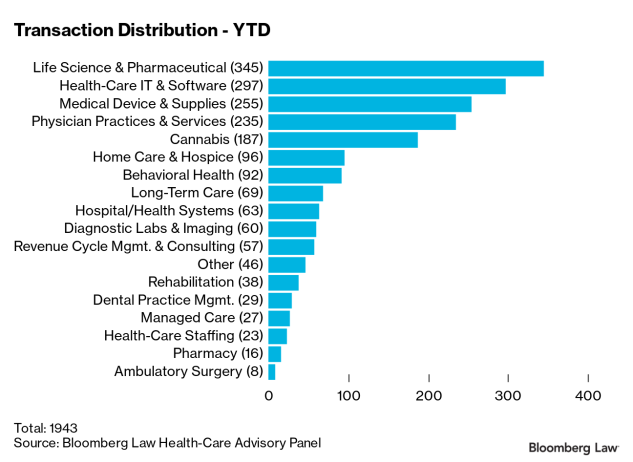 Life Sciences in the Lead

Life sciences and pharmaceuticals led all sectors for the second month in a row, with 53 announced or closed deals, Kocot said.

The August numbers bring the sector’s total for the year to nearly 350.

Investor interest is expected to remain high as policy makers begin the rollout of Covid-19 vaccine booster shots for high-risk groups, and with attention focused on the possible emergence of new Covid-19 treatments.

But investors also will be watching closely as Congress considers drug pricing legislation that could have an impact on the pharmaceutical sector, he said.

The number of deals in the health information technology sector reached 36 for the second month in a row, with telehealth continuing to draw investor interest, Kocot said.

“Although demand for telehealth has continued to stabilize, increasing Covid-19 cases could push some non-emergency care back to telehealth,” he said.

But rising Covid-19 case numbers could have the reverse effect on the medical devices and supplies sector, which saw 29 closed and announced deals in August, said Ross White of KPMG in Washington.

That number was a drop from July’s total of 36 deals.

“Elective procedures are once again being canceled to accommodate hospital capacity for Covid-19 patients in several areas of the country, which could present more challenges for the sector,” White said.

The cannabis sector saw 28 transactions, a high level of activity that has become “the new normal,” said Zachary Taylor of EBG in Newark.

The August number was a jump over July’s total of 20 deals, and brought the year’s total to 187, nearly double that for the same period in 2020.

Dealmaking has spread beyond the states that legalized marijuana early on and now typically involves 10 states per month or more, Taylor said.

The market also has expanded beyond typical activity—manufacturing, processing, and dispensing—to include transactions involving private equity, analytics, and laboratories, he said.

Physician practices and services finished August with 24 deals closed or announced, up from 19 in July, said Herschman.

That pace is likely to grow for the rest of the year, said Hector M. Torres of Focal Point Partners in Chicago. “With so many physician groups currently undergoing transaction processes, we expect the last four months to outpace the volume thus far this year, and conclude with over 400 deals by the end of the year,” he said.

The eye care sub-sector saw nine transactions during the month, including two acquisitions by Eye Health America and four by Sight Growth Partners.

Another noteworthy deal was Unified Women’s Healthcare’s acquisition of Women’s Health USA from Sverica Capital Management. The combined platform will be the largest in the country devoted solely to women’s care, with more than 2,500 providers and 900 locations, Torres said.

Home care and hospice had an active month in August, with 15 transactions announced or closed, up from eight in July and seven in August 2020.

Activity was highlighted by ‘s $5.7 billion acquisition of Kindred at Home, making the insurer the largest provider of home health-care services in the U.S., Torres said.

Humana had previously acquired 40% of Kindred at Home in 2018, with the remaining 60% owned by two private equity firms, TPG Capital and Welsh, Carson, Anderson & Stowe. Kindred at Home provides care to more than 550,000 patients annually.

Concern about more aggressive antitrust enforcement from the Department of Justice and the Federal Trade Commission could be spurring hospitals and health systems to close deals quickly, Patel said.