Health-care mergers and acquisitions continued at a steady pace in April in the face of rising interest rates and ongoing uncertainty from the Russian invasion of Ukraine.

Potential dealmakers are paying close attention to stock market conditions and the actions of the Federal Reserve Bank in response to inflation, said Larry Kocot of KPMG in Washington.

“Economic factors and the impact of the Ukrainian war on global economies are expected to continue to be headwinds for all sectors of the economy,” he said.

The top four sectors were life sciences, medical devices, physician practices, and healthcare IT, each with 20 or more deals in April. Other areas with significant deal volume included the cannabis sector and the home care and hospice sector.

KPMG in Washington and FocalPoint Partners of Chicago prepared the curated year-to-date list and list of select April transactions for Bloomberg Law. 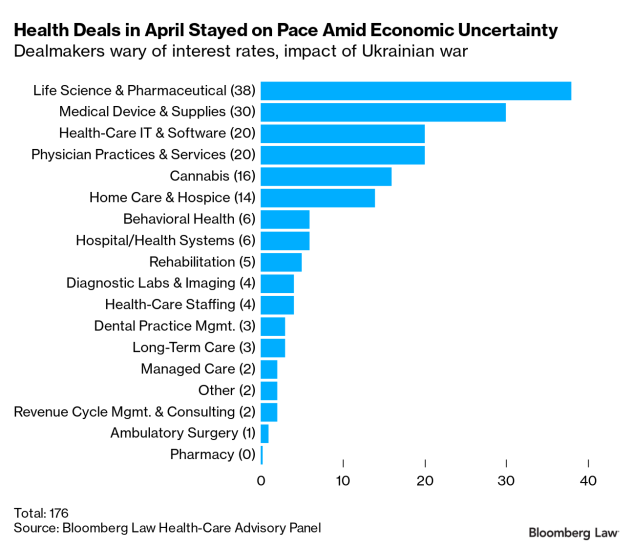 Life sciences and pharmaceuticals led all sub-sectors with 38 announced and closed deals in April, but the number of transactions in the subsector remained flat compared with March (39) and February (35), Kocot said.

One deal of note during April was GlaxoSmithKline’s $1.9 billion acquisition of Sierra Oncology, a biopharmaceutical company developing hematology and oncology therapies, said Hector Torres of FocalPoint Partners in Chicago.

That acquisition provides Sierra Oncology with the infrastructure it needs to expand globally and continue developing treatments for rare forms of cancer, he said.

Rising Covid-19 infection rates and expected Food and Drug Administration approval of vaccines for younger people suggest that demand for Covid-related therapeutics will remain strong, despite waning momentum in Congress for increased federal funding in that area, Kocot said.

“Nonetheless, with considerable dry powder and a strong pipeline of investment targets, we expect life science and pharmaceuticals deal activity to remain stable or perhaps increase, despite the overall industry headwinds,” he said. 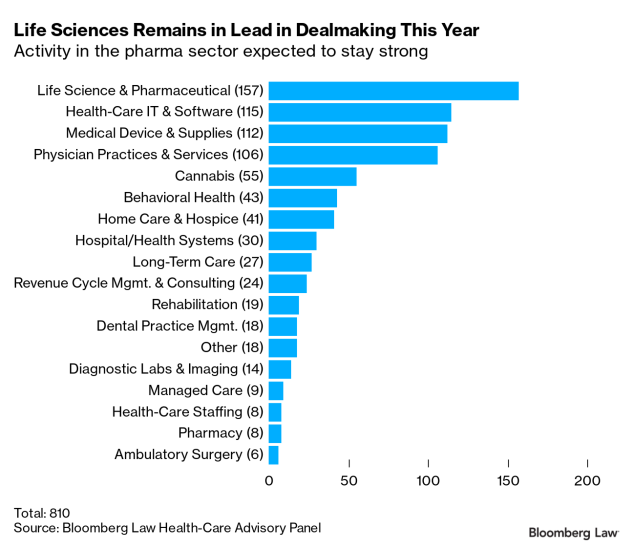 Medical devices and supplies sector had the second-most deals of any subsector (30), up from 20 in March and 22 in February, said Kocot.

Demand for medical devices has been increasing as hospitals resume normal operations, and supply chain disruptions seem to be moderating, he said.

That combination “could be attracting greater investor interest in the sector,” he said.

Activity in the physician group sector continues to be strong and appears likely to continue at a brisk pace, according to health-care investment bankers and attorneys, said Gary Herschman of Epstein, Becker & Green PC in Newark.

The first four months of 2022 saw deals in the double digits in several physician-practice subsectors, including primary care, eye care, and dermatology.

“Experts are expecting a big uptick in the volume of orthopedic group deals throughout the year,” Herschman said. “Further, consolidation of cardiology groups is starting to ramp up, with this subsector expected to see growing volume throughout the year.”

The dermatology subsector saw five transactions in April, including two by Pinnacle Dermatology, a Tennessee-based practice that reached into the Michigan and Chicago markets with acquisitions of Laing & Dimick Dermatology and Dermatology Physicians Group, said Torres.

Activity in the health-care IT sector sends a strong signal that telemedicine initiatives are becoming a permanent solution across many care settings, said Anjana Patel of Epstein Becker & Green.

One example was the announced transaction between United Wound and Skin Solutions LLC, a provider of virtual health services, and Precision Healing Inc., a health-care technology company with a diagnostic platform for wound healing, she said.

April was also a solid month for cannabis transactions, as the sector extended its streak to 16 consecutive months of producing double-digit deal volume, said Timothy McHale of Epstein Becker & Green.

Deals took place in 10 different states, including Texas and Wyoming, and across the full spectrum of services, including therapeutics, cultivation, manufacturing, and dispensing, he said.