New York, which has more cases of Covid-19 than any other state, has received the least amount of federal health grants per diagnosed person, according to a Bloomberg Law analysis of some $2.5 billion distributed by the Department of Health and Human Services.

The health grants, based on existing congressionally authorized programs, are a fraction of the hundreds of billions the U.S. government is distributing to combat the disease caused by the novel coronavirus.

The health grants for New York amount to $802 per person diagnosed with the virus. Alaska, by way of comparison, ranks second-to-last in total cases but is on tap to receive $111,380 per case, Bloomberg Law’s analysis of the HHS data shows. The analysis is based on data downloaded from the agency April 13.

New Jersey, which is second only to New York in cases, is receiving $898 per case, ranking it second-to-last on a per-case basis, the data show.

The disparity can be attributed to rules set in law and established grant formulas designed for different circumstances—treating low-income populations with mental health concerns, for example. The situation is compounded by the pressure on regulators to get the money out fast.

“The funds awarded to date by HHS span a wide range of programs, purposes and statutory requirements including public health preparedness, community health center support, and services for the aging,” an HHS spokesperson said in a statement. “Allocations were based on a variety of factors, some prescribed in statute.”

The existing formulas for health grants traditionally result in more per-person money in sparsely populated states, like Alaska, because providing needed services in those areas is more expensive. Some of the grants are intended for senior nutrition services, which are needed in all states and could be of particular importance during virus-related lockdowns.

There’s also more money on the way intended to be targeted toward areas with heavy Covid-19 caseloads. The Centers for Disease Control and Prevention is slated to provide $350 million to state health agencies where the most Covid-19 patients are being treated. Centers for Medicare & Medicaid Services Administrator Seema Verma said Wednesday that more money is being sent to hospitals with high caseloads.

“Congress has funded a mix of existing formula grant programs and new authorities targeted to hot spots. Formula grants have the particular advantage of speed, which is why they were utilized in conjunction with funding geared toward states with the most COVID-19 cases,” said House Appropriations Committee Communications Director Evan Hollander.

The critically needed cash began flowing March 15, with most of the money—$1.41 billion—going to community health centers which provide primary care for 28 million people, most of whom are uninsured or on Medicaid, the state-federal health program for low-income people. The next greatest chunk—$755 million—went to state and local public health departments.

The programs that these funds were awarded to each have different formulas, but they tend to allocate based on population. Community health centers each received a base sum of $503,000 plus $30 for every uninsured patient seen last year and $15 for every other patient. State and local health departments initially received a base sum plus population-based funding, according to a spokesperson for the CDC. 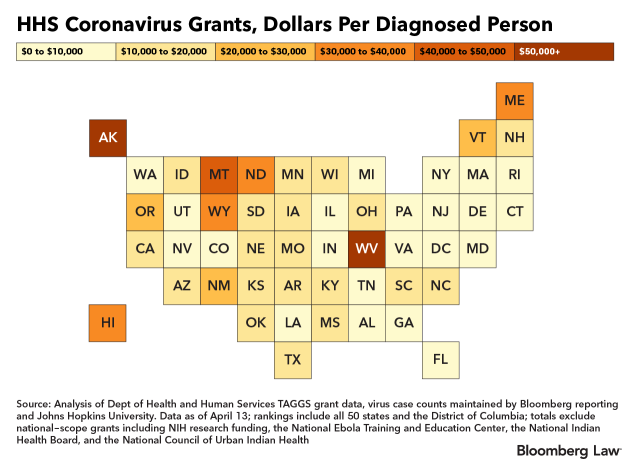 Congress passed three emergency bills to combat the virus, the last of which was the Coronavirus Aid, Relief and Economic Security (CARES) Act (H.R. 748), a $2.2 trillion rescue package signed into law March 27. Lawmakers say they intended the funds allocated to the HHS to go to states with the greatest need.

In addition to the $2.5 billion in health grants, the CARES Act also set aside a separate $100 billion for hospitals, and HHS distributed $30 billion of that money April 10.

That $30 billion isn’t part of the Bloomberg Law analysis because detailed data of individual recipients hasn’t been released by lthe HHS. The aggregate state totals of the $30 billion were released by House Republicans on Tuesday. Bloomberg Law examined those figures separately and found similar disparities. Once again New York and New Jersey received the least money per case of the virus.

Following an outcry that not enough of the relief funds were going to the areas most affected by Covid-19, the HHS said that it would change its funding system for the next batch of allotments.

New York and New Jersey also fared poorly on a dollar-per-case basis in the relief allotments. The funds were initially meted out based on hospitals’ share of total Medicare fee-for-service reimbursements in 2019, reflecting activity in those two states’ hospitals before they became overrun with Covid-19 patients.

“HHS and the Administration will rapidly disburse additional distributions to providers in areas particularly impacted by the COVID-19 outbreak and providers that were not proportionately reflected in the first distribution such as children’s hospitals, pediatricians and Medicaid providers,” an HHS spokesperson said.

The first distribution through existing Medicare payment mechanisms “allowed us to make initial payments to providers as quickly as possible without requiring an individualized application process,” the spokesperson said.

The HHS is also giving providers up to six months of their Medicare payments in advance, as a loan. So far, they have approved $51 billion in those loans.

The Bloomberg Law analysis seeks to capture grants tied to a specific state. For that reason, it excludes funding with a national scope, including medical research funding, grants for the National Ebola Training and Education Center, the National Indian Health Board, and the National Council of Urban Indian Health.

Fewest Dollars for Most Cases

States that the White House has expressed great concern about—Louisiana, Michigan, Pennsylvania, Illinois, and Maryland—ranked in the bottom 10 of dollars per case. Of the areas the administration is watching closely, only the District of Columbia and Virginia ranked above, at 33rd and 34th. 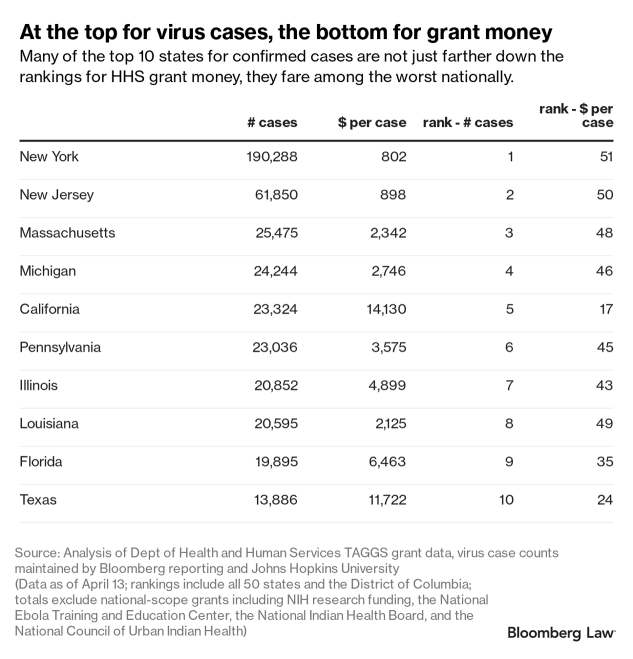 The unequal allocation hurts the heavily Democratic states of New York and New Jersey. However, Louisiana, a reliably Republican state, ranked 49th for money per case.

The three states that got the most money per case and have small populations, and fewest cases, are Alaska, Montana, and West Virginia. 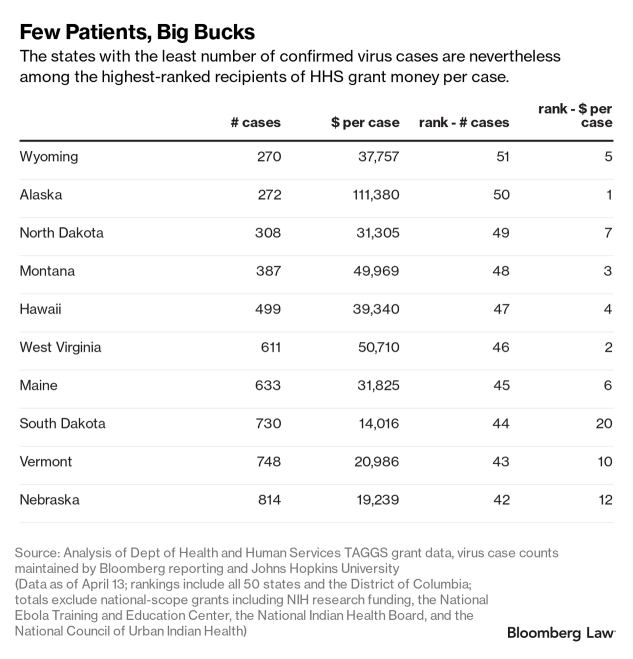 The states that received the least money per resident were Virginia, Nevada, Texas, Minnesota, and North Carolina.

Lawmakers from New York and New Jersey have objected to the funding allocation formulas, and want an additional $40 billion to be allocated on coronavirus infection rates, according to an April 10 letter.

(Updates with additional reporting on targeted funds, starting in the seventh paragraph.)