The U.S. likely is producing enough masks, gowns, and other personal protective equipment. The supplies just aren’t getting to all the health-care workers who need them.

Federal funding and real-time data sharing have helped manufacturers boost domestic production of gear seen as critical for essential workers during the pandemic. But without a national, centralized database to track supply and demand—particularly who needs what and where—many of those workers will continue to go without, lawmakers and policy consultants say.

“We never actually identified how much we need as a country and how much we have as a country,” Rep. Andy Kim (D-N.J.), a member of the House Select Subcommittee on the Coronavirus Crisis, told Bloomberg Law. It’s difficult to know if the federal government is doing enough if that wasn’t accounted for, he said.

Health-care workers still don’t have access to adequate PPE, although the situation has vastly improved since the beginning of the pandemic. The issues that manufacturers have worked through to make sure inventory is robust show the increasing complexity of the medical supply chain in the U.S. health-care system.

But they also show that production levels likely aren’t the cause of continued supply shortages throughout the country.

There is no comprehensive data about what PPE is needed or who needs it on a national level, which makes it impossible to inform equitable distribution, said Megan Ranney, co-founder of Get Us PPE, an organization that provides PPE to communities in need at no cost.

The government has launched a platform to track health-care equipment production and is creating a second one on hospital needs. But those moves don’t cover PPE for the entire health-care system.

The federal government also doesn’t release any information publicly about how much PPE health-care facilities need. However, Get Us PPE says it has received 16,800 requests since March, totaling at least 22 million pieces of PPE. In October 92% of the requests came from non-hospital facilities, including nursing homes, dental clinics, and homeless shelters.

Ranney, an emergency physician at Brown University, said it’s possible the national stockpile isn’t getting many requests because it’s not clear who can ask for supplies or what metrics the government uses for assessing and fulfilling those requests. 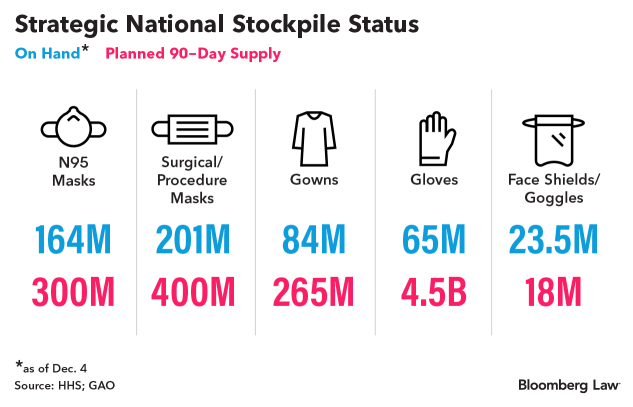 As of Dec. 4, the national stockpile had 164 million N95 masks, 201 million surgical and procedural masks, 84 million gowns and coveralls, 65 million gloves, and 23.5 million goggles and face shields, according to an HHS spokesperson. States are building up their own stockpiles, and 90% have at least 30 days of supplies, Brig. Gen. David Sanford, director of the Trump administration’s Supply Chain Advisory Group, told reporters Dec. 10. The national stockpile is set to have 190 million gloves by the end of the week, Sanford said.

The administration has been working to stockpile 90 days supply based on peak Covid-19 infections, but it’s not clear if that amount includes supplies for doctor’s offices, home health workers, teachers, and other parts of the community, Kim said.

“We’re no doubt in a better place” with the PPE supply, Kim said, but “what is the metric by which we’re calculating what that need is?”

A “supply chain IT control tower” launched by the Trump administration tracks health-care equipment makers and distributors and includes data on production capacity, forecast demand, and target distribution. The administration is also gearing up to launch a “health-care resilience control tower” that tracks hospitals’ staffing and equipment needs and alerts the government when facilities are running low.

However, this second platform will initially only include hospitals and not smaller facilities like dialysis centers or physician practices. And without information from the entire health-care system, the database is incomplete, consultants say.

Everyone should have a list of the places where supplies are needed for workers at that moment, said Nicolette Louissaint, executive director and president of Healthcare Ready, a nonprofit that focuses on health-care supply chain preparedness. States and companies need to be able to identify where the true need for PPE is to get supplies to workers, she said.

There’s likely enough supply for the current demand from hospitals, Ranney said, but that doesn’t allow for PPE as a single-use product—the traditional way it’s been used. And that demand doesn’t typically include providers who don’t work in hospitals, like school nurses and home health aides.

In addition, many manufacturers are requiring PPE be purchased in large volumes or with cash already on hand, which makes it unavailable to smaller groups of health-care providers, Ranney said.

A more broadly available data set about providers lacking PPE could allow those smaller groups to get supplies when needed.

Ranney said all health-care facilities should have to include information about their PPE supplies as part of the data they already submit to the Department of Health and Human Services. Hospitals are required to submit weekly data to the Centers for Disease Control and Prevention on how much PPE they have, if they can order more, and if they’re reusing it.

She also said the federal government should invest in work to coordinate the manufacturing and distribution of both bought and donated PPE, either done by other entities or the government itself.

Manufacturers started using real-time PPE usage data in an effort to increase supply during the pandemic—a shift from previous production models that relied on past usage.

In addition, financial investment from the federal government and some states has increased private sector manufacturing and helped provide assurance to companies that they won’t lose money.

But industry is still concerned about how long the financial support will last, Kim said. Longer-term, sustained investments from governments would have helped create more certainty for the industry, he said.

The Indiana Economic Development Corporation, a public-private economic agency, guaranteed companies it would buy their supply until a set time, said Luke Bosso, the agency’s senior vice president and chief of staff. Companies then had the option of entering into an agreement where the state would continue to buy their supplies going forward.

“We’ve tried to take as much risk out of our purchases as possible,” Bosso said, so the companies know they will get paid if they continue to make PPE.

States and health-care facilities are also better prepared to handle supply shortages going into the winter, both due to stockpiling and increased cooperation.

Louissaint said the turnaround in the supply of PPE wasn’t a single event, but a “dedicated, concerted effort to work together to share information about what was available, what could be available.”

There are good indicators that the U.S. is in a better position, said Chaun Powell, group vice president of strategic supplier engagement at hospital supply-purchasing group Premier Inc.

But the stockpiles are just a band-aid on the PPE supply chain, he said. Even with the improvement in manufacturing, it doesn’t help if health-care workers can’t get the supplies they need.

Unlike most other wealthy nations, U.S. shortages of PPE have persisted throughout the pandemic. Despite some moments of reprieve in cases, the supply chain hasn’t been able to catch up to how much is needed.

Doctors and nurses are still reusing their PPE, at points were using trash bags as gowns, and organizations are still purchasing supplies from untrustworthy suppliers.

A September study found that an N95 can be decontaminated and reused up to three times, but 58% of nurses surveyed by the American Nurses Association said they were reusing single-use PPE like an N95 mask for five or more days. Another study found masks began failing around the third and fourth use.

About 1,700 U.S. health-care workers have died from Covid-19 and related complications, according to a September National Nurses United report.

“Many other countries experienced very short-term shortages of PPE in the early days of the pandemic when every country was trying to purchase,” but those ended, Ranney said.

Italy, for example, had PPE shortages and used “extreme measures of conservation,” Louissaint said, but their surge in cases decreased “fairly quickly.”

The U.S. has a “fragmented procurement strategy” because each state operates on its own, Louissaint said. A unified strategy allows for streamlining and a better understanding of real need rather than anticipated, which makes purchasing easier to control, she said.