A recent federal appeals court ruling flipping a $34 million award from one whistleblower to another highlights what can be at stake under the False Claims Act’s first-to-file rule.

It also shows how important it is for courts to know what evidence they may review when weighing who filed the first suit under the federal fraud law.

The rule incentivizes whistleblowers to race their claims to the courthouse because it bars those filing their complaints second, third, or even fourth, from accusing a company of defrauding the government.

The award switched hands in the U.S. Court of Appeals for the First Circuit May 6 because that court joined the D.C. and Second circuits in saying the rule is nonjurisdictional, meaning courts may only consider the complaints themselves when deciding who filed first.

Other courts say the rule is jurisdictional, which allows them to consider a much broader range of evidence, including meetings and communications with the government.

The First Circuit’s ruling, in addition to naming a new winner in the case before it, also furthered a circuit split and reignited a legal debate over which approach is best for both whistleblowers and the companies being sued. 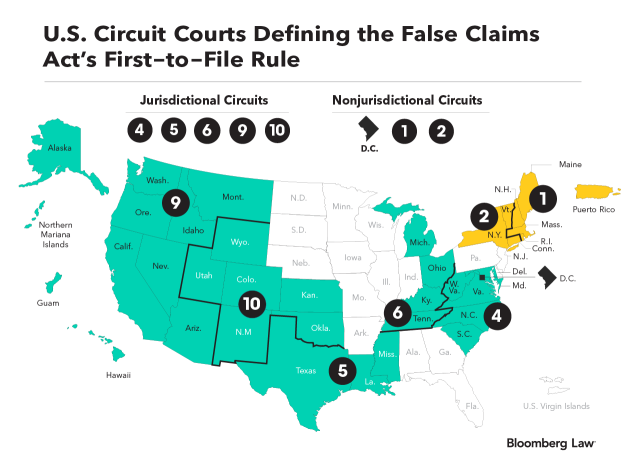 A court’s review of evidence outside of the complaint “is an invitation for mischief,” said Robert M. Thomas, Jr., managing member of Whistleblower Law Collaborative LLC in Boston.

“In some cases, you have 10 whistleblowers, or alliances of groups of whistleblowers teaming up to split a recovery, and a lot of scheming and jockeying to convince a judge their group was really first. It can encourage endless fighting over a recovery,” he said.

But while the nonjurisdictional view might be easier to apply, companies that face FCA claims may prefer the jurisdictional approach.

That’s because a defendant litigating in a jurisdictional court may assert that a complaint is barred by the rule at any time in a case, even if it has gone to trial and then on to an appeal, said J. Alex Ward of Morrison & Foerster LLP in Washington.

A defendant in a nonjurisdictional court, by contrast, could waive the right to raise a first-to-file argument if it doesn’t assert the challenge in the earliest stages of litigation.

Outside Evidence Vs. Complaint Only

A Massachusetts district court ruled in August 2016 that Robert Cunningham should receive a $34 million share of a $227 million settlement as the first whistleblower to file fraud claims against Millennium Laboratories Inc.

The district court said the first-to-file rule was jurisdictional, which allowed it to consider materials Cunningham provided to the government in a disclosure statement.

But the First Circuit reversed, ruling that a May 2015 Supreme Court decision discussing the rule didn’t speak of it in jurisdictional terms, and neither statutory text, nor context, nor legislative history suggested the rule should be viewed that way.

The appeals court’s conclusion that the rule was nonjurisdictional required the court to restrict its examination to the contents of Cunningham’s complaint to see if he, or another whistleblower, Mark McGuire, filed first.

After so limiting the first-to-file inquiry, the First Circuit decided that the two complaints didn’t allege similar frauds. McGuire was the first whistleblower to file a claim that included the essential elements of the fraud the government pursued, the First Circuit said. As such, he was entitled to the $34 million recovery.

The First Circuit has adopted the “saner” approach, Thomas said.

In jurisdictional circuits, like the Fourth Circuit, whistleblowers can and will try to point to communications and interactions with the government, like phone calls and meetings, to argue that they alerted the government to fraud first, he said.

“Once you look past the four corners of a complaint, its an unworkable mess. It is an invitation for unscrupulous litigation. If you are a week behind another whistleblower, you will move heaven and earth to point out how you were really first,” Thomas said.

“If the First Circuit had affirmed the district court, whistleblowers and their attorneys would be encouraged to look back at who said what and when, and repackage arguments. The fights would be almost limitless,” he said.

But companies accused of fraud may actually prefer to litigate in jurisdictional courts. They can raise first-to-file challenges at any time in a case, even if the case has advanced to trial and is being litigated at the appeals court level.

“This is important because a defendant might not even know there is a case against it,” Ward said. “Cases can be under seal for a long time. Being able to raise a challenge at any time really does matter.”

“In nonjurisdictional circuits, you can definitely jeopardize the right to raise a first-to-file challenge if you fail to include it in the first pleading in response to a complaint,” Ward said. “It may be possible to raise a challenge later, but you certainly risk waiver. And if a case has proceeded to trial, at that point, you have definitely waived the right.”

“It cuts both ways, but defendants generally want to be able put more facts in front of the court to argue that a whistleblower wasn’t the first to file because someone else’s complaint already put the government on notice about alleged fraud,” he said.

“It’s not universally true, but generally, if you are a whistleblower trying to fend off others, you probably want to limit the scope of inquiry,” Ward said.

Defendants may also have an advantage in jurisdictional courts because those courts don’t necessarily have to accept facts in a complaint as true for purposes of a motion to dismiss on jurisdictional grounds, he said.