Pen and paper data collection. Faxing basic information. Gutted local workforces. This is the U.S. public health landscape in 2020 as it tries to respond to the coronavirus and prepare for the next inevitable pandemic.

Decades of cuts in public health funding have crumbled the nation’s public health infrastructure, leaving health departments without the tools and the people they needed to respond to the Covid-19 pandemic, public health advocates said.

The solution requires money, they agree. Governments must increase the base funding that goes to the network of federal, state, and local public health departments, replacing a panic-and-neglect cycle with steady, stable funding before responders face the same problems in the next health emergency, public health advocates and leaders said.

“The money eventually comes, often later than we need it, and then the expectation of performance far exceeds both the event and the money. And that’s the problem,” Georges C. Benjamin, executive director of the American Public Health Association, said. “If we did this with the military, we’d have to rebuild the military every time there’s an activity, some military emergency that happens.”

The Trump administration has faced criticism for its Covid-19 response, including missteps in testing and a Columbia University study that found implementing social distancing and other control measure one to two weeks earlier could have prevented more than half the deaths in the U.S.

While the White House called for cutting the Centers for Disease Control and Prevention by $1.29 billion in the 2021 plan, public health leaders say inadequate funding goes back decades.

The CDC’s budget has been flat for the last decade when accounting for inflation, with the nation spending fewer than $22 per person on core public health activities, according to a report from the nonprofit Trust for America’s Health. On top of that, 31 states have cut their public health budgets over the past few years. 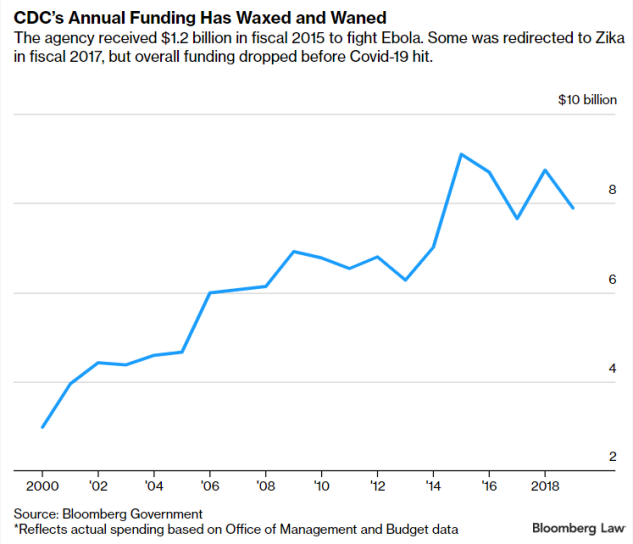 Across the board, public health advocates and leaders said funding cuts led to lapses in technology and an inability to build an adequate public health workforce. Preparing for the next outbreak requires restoring funding for core functions of public health departments, which handle everything from chronic disease epidemics to maternal mortality to smoking on top of emergencies and responses.

More than 150 organizations, including the APHA and the nonprofit Trust for America’s Health, are calling for a $4.5 billion annual increase for the CDC to fund mostly local and state health departments. That money would go toward policy communications, overall surveillance, epidemiology, and general emergency preparedness, said John Auerbach, president and chief executive officer of Trust for America’s Health, which has reported on the chronic under funding of public health.

Public health funding has declined since the 1960s, following the eradication of many infectious diseases such as smallpox and measles in the U.S., said Eric Toner, senior scholar with the Johns Hopkins Center for Health Security who focuses on health care preparedness for catastrophic events, pandemic influenza, and medical response to bioterrorism.

State funding levels increased to about $1 billion with a boost in funding public health preparedness programs after Sept. 11, 2001, and the subsequent anthrax attacks, Marcus Plescia, chief medical officer of the Association of State and Territorial Health Officials, said. But that level has dropped 30% to 35% for core public health programs over the last few decades.

“We’re feeling the effects of that now,” Plescia said.

From SARS in 2002 to Zika in 2016, the government has provided an influx of response money. But public health advocates said low funding cycles followed by large bursts of directed funding ultimately leave public health departments shorthanded when emergencies strike.

“We need people who have been in the field, who can make a living doing this. And they need laboratories and they need functional spaces,” Toner said. “All these things are long-term commitments and investments, and a last-minute, just-in-time response is not sufficient.”

The think tank Center for Strategic and International Studies called for ending the “crisis and complacency” funding cycle in a report issued last November. Julie L. Gerberding, former CDC director who was co-led that report, said emergency money gets repurposed once the problem doesn’t seem so big—even if those problems haven’t completely gone away.

“We start something and we never finish it and that leaves the front line with less capability to respond to whatever it is that comes up next in front of them,” Gerberding, who is now an executive vice president Merck & Co. Inc., said.

This funding pattern “cripples our response in multiple ways,” including the limited capacity for Covid-19 testing and contact tracing, Auerbach said,

“The CDC has gotten all the attention in terms of the initial testing. But the underfunding of the laboratories also slows that down,” Auerbach said.

The pandemic “highlighted the shortcomings of our public health system that has been underresourced for decades,” CDC Director Robert R. Redfield told the House Appropriations labor-health and human services panel hearing June 4. “We must equip our public health laboratories with advanced technology and the ability to adopt appropriate platforms required in an emergency response.”

He also mentioned the need to build a strong workforce, noting the CDC is looking to hire 30,000 to 100,000 new contact tracers by September to track the spread of Covid-19, and the need to upgrade public heath IT infrastructure.

Some still fax basic information, Plescia said. “These are probably smaller places with more limited budgets. But I think people have this expectation the data and results are just moved electronically, quickly, and seamlessly. And in public health, it’s not,” he said. “Our surveillance systems are slow because it takes so long to get things into the system.”

A significant downward trajectory for public health funding occurred with the 2008 and 2009 recession because of dramatic cuts across the state and local budgets, Auerbach said. But once the economy bounced back, the funding didn’t. Local health departments lost more than 55,000 jobs between 2008 to 2017 the Trust for America’s Health found.

House appropriators who oversee the CDC’s discretionary appropriation expressed interested in securing long-term funding for the CDC as they continue to work on virus response bills. The agency has received $7.5 billion in supplemental funding since March, Labor-HHS Subcommittee Chairwoman Rosa DeLauro (D-Conn.) said. That amount runs close to the $7.97 billion Congress appropriated to the agency for all of fiscal year 2020, which was a $0.6 billion increase from 2019.

“This is a biomedical Pearl Harbor,” Cole said, referring to a $45 billion increase in defense spending following the Pearl Harbor attack."We need to recognize that. And we need to not just deal with this thing, but build the capacity.”