U.S. Vice President Mike Pence speaks during a White House Coronavirus Task Force press briefing at the U.S. Department of Education July 8, 2020 in Washington, DC. Vice President Pence and the task force members discussed the latest on the COVID-19 pandemic and the reopening of nation's schools in the Fall.
Photographer: Alex Wong/Getty Images

The Trump administration will push for emergency education funds in another coronavirus relief package to be conditioned on schools reopening in the fall, Vice President said Wednesday.

“As we work with Congress on the next round of state support, we’re going to be looking for ways to give states a strong incentive and encouragement to get kids back to school,” Pence said at a press briefing with members of the White House coronavirus task force. 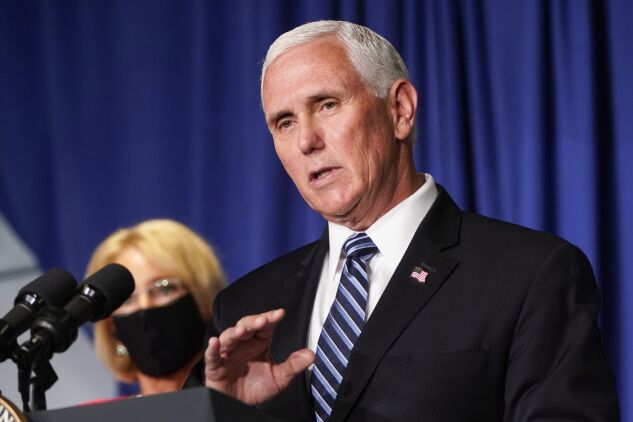 Trump, in a tough re-election fight in November, is pressing for schools to reopen as millions have been thrown out of work by the pandemic. Parents quarantining with their children have been unable to return to their offices. Many schools have struggled to educate online, and face tough decisions on how to maintain social distancing and sanitation protections once facilities reopen.

Steps to Reopen are ‘Imperative’

The latest meeting of the coronavirus task force followed multiple events at the White House Tuesday focused on school reopening, which Trump has made a priority.

Pence said reopening physical campuses is essential for children’s academic, emotional, and social development. He acknowledged some school districts won’t be able to fully reopen because of spikes in coronavirus cases, but said it was “absolutely imperative” that states take steps to get students back into the classroom to the fullest extent possible.

New York City Mayor Bill de Blasio said Wednesday that student attendance at the city’s public schools would be limited to three days a week in the fall in order to contain the spread of the virus.

DeVos said it should be up to local leaders how they reopen. But she said some schools had failed to provide a quality education after closing their doors. And she criticized Fairfax County Public Schools outside Washington in particular for letting families choose between online learning in the fall or attending classes on campus two days each week.

“What’s clear is that students and their families need more options,” DeVos said.

The school district said in a statement that a normal in-person school year was preferable but the health and safety of staff, students, and the community “must outweigh all other factors.”

Reopening campuses safely will require more than $116 billion in new spending to reduce class sizes, clean school buildings, and buy protective equipment for staff, according to an analysis released last month by the American Federation of Teachers, the nation’s second-largest teachers’ union.

A House coronavirus relief bill () passed in May would provide $58 billion to K-12 schools—well short of what education advocates have called for in new emergency relief. Senators are expected to begin work on their own relief package later this month.

Senate Minority Leader (D-N.Y.), and Sen. (D-Wash.), the ranking member on the Senate Health, Education, Labor, and Pensions Committee, have proposed a bill that would provide $430 billion in aid for education, including $175 billion for K-12 schools.

Murray said the Trump administration was seeking to use student health as a bargaining chip.

“Everyone wants schools to physically reopen, but we need to make sure it’s done safely,” she said in a statement.

Pence didn’t say how much additional aid the White House would support for public schools but he said the CARES Act () enacted earlier this year provided $13 billion to support education.

Many of those funds have gone unspent in part because of a dispute between DeVos and some state education leaders over how much funding to pass onto private schools. Several Democratic attorneys general sued DeVos this week over a rule directing K-12 public schools to boost the amount of Covid-19 relief going to local private schools.

, director of the Centers for Disease Control and Prevention, said at the task force’s press briefing Wednesday that his agency would release several new guidance documents soon for safely opening schools.

Those documents will address the role of parents and caregivers, efforts by schools to monitor symptoms of illness, and the proper use of face masks in school settings, he said.

Trump earlier Wednesday said he disagreed with earlier guidance issued by the agency, which he called expensive and impractical.

“I want to make it very clear that it’s not the intent of CDC’s guidelines is to be used as a rationale to keep schools closed,” Redfield said.

(Updates with comment from Sen. Patty Murray in paragraphs 15 and 16. )

To contact the editors responsible for this story: at phendrie@bgov.com; at hrothman@bgov.com